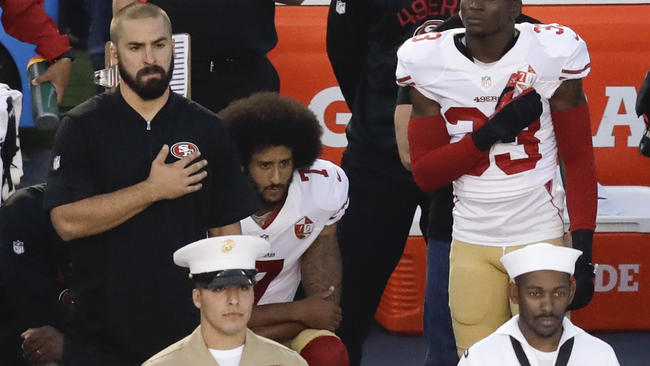 Here are the grades for the 49ers’ 31-21 preseason win over the Chargers.

QUARTERBACKS: C. Colin Kaepernick played better than he played last week, as we expected. He passed the ball on time and accurately and led one touchdown drive. He also threw mostly short, one-read passes and forced two throws into double-coverage, both of which almost got intercepted. I give his performance a “C,” and I still think the 49ers will cut him this weekend. He didn’t do enough to win the starting job and he’s too expensive to be their backup.

Christian Ponder would be a much cheaper backup. Tonight he ran for two touchdowns and converted a third-and-15 with a 21-yard pass down the middle of the field to tight end Je’Ron Hamm. Ponder finished the preseason with a passer rating of 85.1. Kaepernick’s rating was 67.5.

Jeff Driskel was beyond awful tonight. He posted a passer rating of 0.0 which, I’ve heard, is as bad as it gets. In fact, it’s so bad the Niners probably can cut him and he’ll clear waivers.

WIDE RECEIVERS: C. Dres Anderson made a catch in traffic while taking a big hit. He might make the final roster. And new slot receiver Jeremy Kerley converted a third down in the first quarter. Other than those two plays, the Niners’ wide receivers hardly showed up. DeAndre Smelter didn’t play. Look for him to end up on the Injured Reserve List.

TIGHT ENDS: B. Bruce Miller made three catches for 19 yards early in the game, and Je’Ron Hamm made four catches for 65 yards late in the game. Hamm probably will make some team’s final roster if he doesn’t make the Niners. Blake Bell made a nice touchdown catch in the red zone which didn’t count because he was flagged for a ticky-tack pass interference penalty.

OFFENSIVE LINE: A. Gave up only one sack. Credit Assistant General Manager Tom Gamble for transforming the 49ers’ offensive line since returning from the Eagles.

DEFENSIVE LINE: B. Struggled stopping Kenneth Farrow, who averaged 9.0 yards per carry, but shut down the rest of San Diego’s backup running backs. Nose tackle Garrison Smith recorded one two tackles for loss and one QB hit. I think he’ll make the roster as the seventh defensive lineman.

LINEBACKERS: B. Inside linebacker Michael Wilhoite gave up a few catches early in the game. He looks slow. The 49ers should give his roster spot to Shayne Skov who looks much quicker and broke up two passes. Another player who should make the team is outside linebacker Marcus Rush. He recorded two sacks and an interception.

DEFENSIVE BACKS: C. Chargers’ starting quarterback Kellen Clemens picked on Niners’ nickel back Will Redmond. He was tentative in coverage. Does not seem ready to play in a regular-season game, as opposed to the other rookie cornerback, Rashard Robinson, who intercepted Chargers’ third-string quarterback Mike Bercovici.

This article has 163 Comments