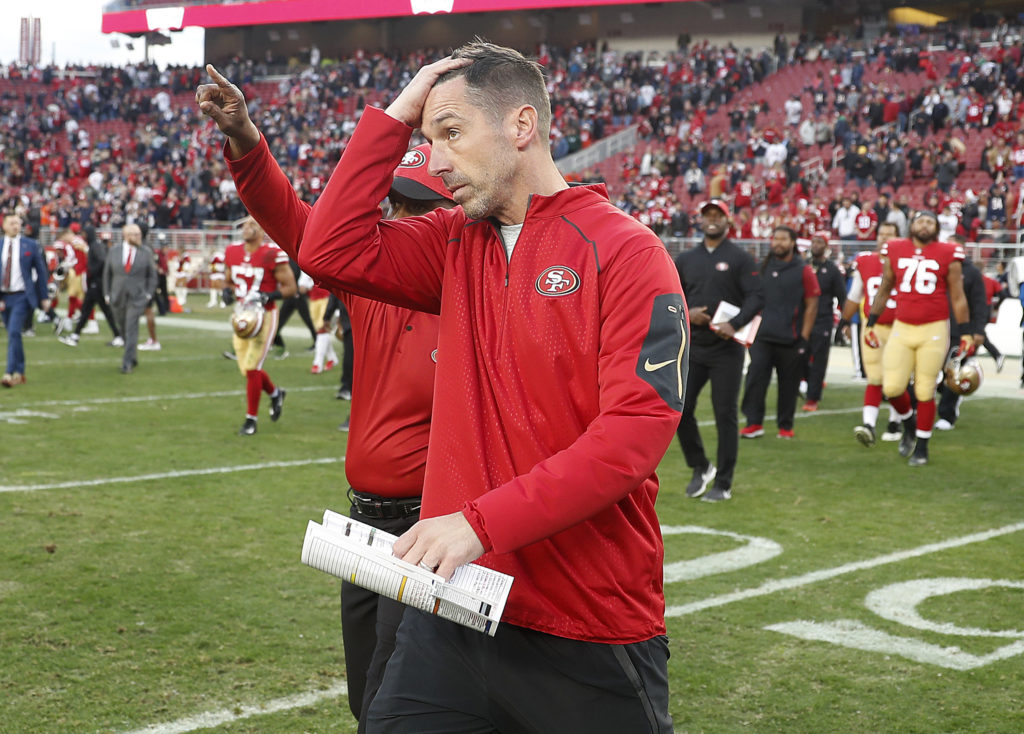 NICK MULLENS: C-MINUS. He mostly played without his No. 1 receiver (Dante Pettis) and starting running back (Matt Breida), and mostly played well against a great defense. Mullens passed for 241 yards, threw four passes that were tipped at the line of scrimmage because the interior line couldn’t hold its ground, threw two incomplete screen passes because the receiver was covered, threw at least a half dozen incomplete passes because the Bears pass rush disrupted his rhythm, threw a touchdown pass that George Kittle dropped and an accurate pass which Marquise Goodwin tipped to the Bears for an interception. Had Goodwin not tipped that pass to Bears and had Kittle not dropped that touchdown pass, Mullens quarterback rating would have been an impressive 92.2. He deserved an A-minus until the final play. But, the final play was a doozy. On fourth and four with the game on the line, Mullens could have walked for the first down and stopped the clock. Instead, he showed his inexperience for the first time this season, threw a deep pass out of bounds and the 49ers lost. That play will haunt him for quite a while. Will he bounce back?

RUNNING BACKS: D. Matt Breida left the game with an ankle injury for what seems like the 4,080th time this season. He is a china doll. Backup running back Jeff Wilson averaged just 2.5 yards per carry, but at least he didn’t fumble.

WIDE RECEIVERS: D-MINUS. The 49ers needed someone to step up, and Kendrick Bourne did. He caught four passes for 73 yards, including a 25-yarder during the final drive. None of the other receivers did much. Dante Pettis injured his knee for the second time this season. He’s brittle. And Goodwin caused an interception when he alligator-armed a pass over the middle and tipped it to the Bears. Goodwin has reverted to the player he was in Buffalo – a bad player.

TIGHT ENDS: C. George Kittle caught seven passes, but dropped one in the end zone. Garrett Celek left the game with a concussion.

OFFENSIVE LINEMEN: C. Weston Richburg and Mike McGlinchey both played poorly. Both committed one false-start penalty. Both got beat in pass protection. Richburg couldn’t hold his ground one on one – big surprise. And McGlinchey couldn’t hold his own against Khalil Mack. Mack schooled him three times, and beat him once to the inside to stuff a run for a two-yard loss.

DEFENSIVE LINEMEN: B. They sacked Mitchell Trubisky three times and limited Bears running back Jordan Howard to 53 rushing yards and one touchdown. DeForest Buckner had one sack. Cassius Marsh had two.

LINEBACKERS: C. Elijah Lee is the most underrated player on the defense, and a better player than Reuben Foster. Lee recorded a team-high 12 tackles against the Bears. But, rookie Fred Warner struggled. He recorded only four tackles, and committed a holding penalty which negated an interception by K’Waun Williams.

SPECIAL TEAMS: B. Robbie Gould made all of his kicks, but Richie James averaged just 15 yards per kickoff return. His poor returns cost the 49ers two first downs.

COACHES: D. Robert Saleh’s defense gave up only 14 points, but the Bears weren’t trying to run up the score. They were content throwing short passes, and Saleh did nothing to take them away. Needed to change up the coverage or blitz – anything to disrupt Trubisky’s rhythm. Saleh can’t allow a quarterback to continuously hit seven-yard passes, especially when all of the passes land in the middle of the field or to the side away from Sherman. Against the Bears, the Niners needed to defend only two-thirds of the field, because Trubisky almost never threw a pass to Sherman’s side. How hard is it to defend two thirds of the field with six defenders? Saleh must do better. But, he still outperformed his head coach, Kyle Shanahan, whose offense scored zero points in the second half, and zero touchdowns all game. After halftime, Shanahan inexplicably abandoned his run game. Called just three runs and 21 freaking passes during the second half against a defense that has 27 interceptions this season. A genius like Shanahan should know better.

This article has 84 Comments