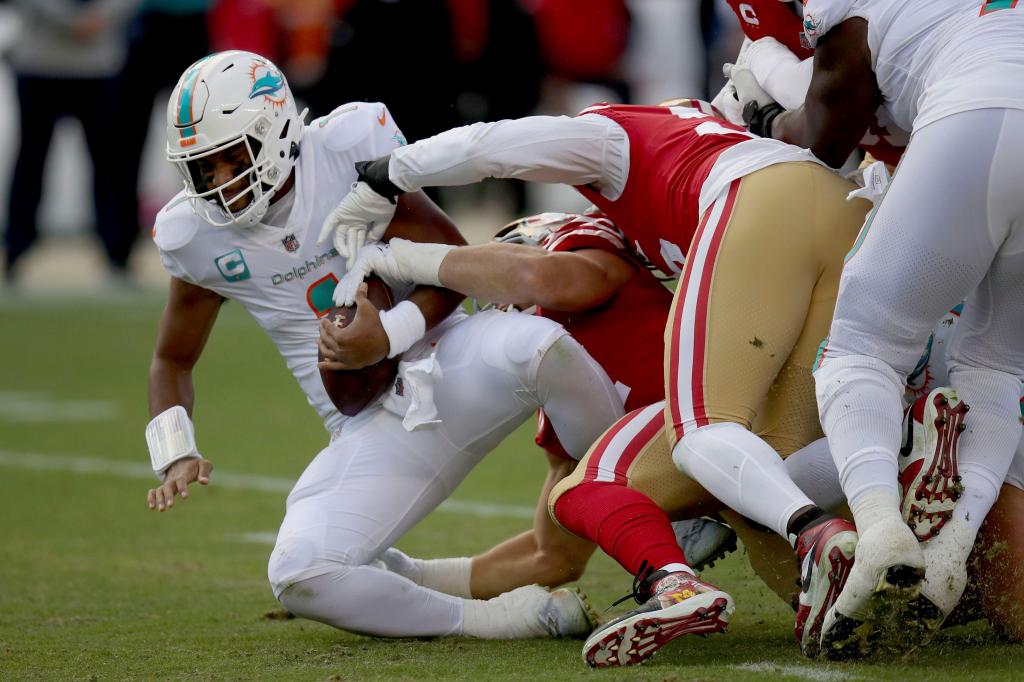 Here is what stood out from the 49ers 33-17 win over the Dolphins on Sunday afternoon at Levi’s Stadium.

Given the circumstances surrounding Purdy’s entry into the game, his performance was very good.

Purdy, dubbed Mr. Irrelevant due to being the final pick in the draft, completed 25 of 37 pass attempts for 210 yards, two touchdowns and one interception. He became the first Mr. Irrelevant to ever attempt a pass in an NFL regular season game.

Where the 49ers go from here is the question.

It is not uncommon to see an untested quarterback come in and look good for a game or two.

San Francisco fans know this all too well. They’ve seen Nick Mullens step in and make just enough plays to get the 49ers beat.

If Purdy can keep from giving the ball to the other team the 49ers defense and playmakers may be able to sustain them.

“I got all the confidence in the world in Purdy,” said 49ers starting linebacker Fred Warner. “It’s a lot to ask of a rookie being thrust into the situation he’s in. At the same time, he doesn’t need to do too much. He has so many weapons on that side to get the ball to get the ball to. His job is just to protect the football. We have a really good offense so he’s in the best position possible.”

McCaffrey was held under four yards per rushing attempt for the third time in the last four weeks. However, that hasn’t stopped him from being a spark plug for the Niners offense.

Against Miami, McCaffrey accounted for 146 of the 49ers 351 yards. He became the first 49er to lead the team in rushing and receiving in the same game since Raheem Mostert on week one of 2020 against Arizona.

The running back caught eight passes for 80 yards, six of those turning into a first down or touchdown.

The undrafted rookie free agent saw the most action of his career. Mason finished with 51 yards on eight carries.

Mason started hot but as the game wore on it appeared the Dolphins caught on to how San Francisco was using him.

Samuel finished with six catches for 58 yards, the most receiving yards for Samuel since week six in Atlanta.

He also had the most exciting four-yard loss in 49ers history when he made several Dolphins defenders miss to limit the damage on an end around.

Taking away the middle of the field was key for San Francisco against Tua Tagovailoa.

Warner knocked away a pair of passes on the day. The most impressive coming in the first quarter when he dropped deep into the middle of the field and got a hand on a pass intended for Trent Sherfield.

The linebacker finished off the game with an interception of Dolphins backup quarterback Skylar Thompson.

Greenlaw was all over the field against Miami, leading the 49ers in tackles with eight. The linebacker also knocked away a pass and recovered a fumble.

The fumble recovery was Greenlaw’s second in as many weeks. He became the first 49er to recover a fumble in consecutive weeks and return a fumble for a touchdown since 2019.

Perhaps the best play from Greenlaw came in the second half when Tua Tagovailoa hit Tyreek Hill with a short pass. Greenlaw ran the speedy wideout down and made the stop for only a gain of three. Impressive showing of athleticism for the linebacker.

In 11 games Nick Bosa in the lineup, the 49ers defense has allowed more than 19 points only once.

Bosa got to the quarterback three times on Sunday. It was Bosa’s first three sack performance since Carolina in 2019.

The defensive end now has 39 sacks through his first four seasons, second only to Aldon Smith’s 44 since the NFL made sacks an official stat in 1982.

In his first start since week four Armstead was held without a tackle. That does not mean he was insignificant in the 49ers win.

The defensive tackle came up big on consecutive plays in the third quarter.

Holding onto a seven-point lead and the Dolphins threatening, Armstead drew a holding call on a Raheem Mostert run.

On the next play, Armstead beat the Dolphins right guard and hit Tua Tagovailoa has he tried to hurry a throw to Jeff Wilson Jr. resulting in an interception for Jimmie Ward.

As mentioned above, Ward came away with a key interception in the third quarter. Playing zone coverage, he broke on Tagovailoa’s check down and dove over a falling Jeff Wilson Jr. to come away with his second interception of the season tying a career high.

Ward finished second on the 49ers with five tackles and a pass breakup in addition to the interception.

Lenoir has been a solid replacement on the outside since Emmanuel Moseley was lost for the season with a knee injury.

The second-year defensive back came away with his first career interception when he caught a deflected pass off the hands of Tyreek Hill. Lenoir had one tackle to go along with the takeaway.

This article has 51 Comments