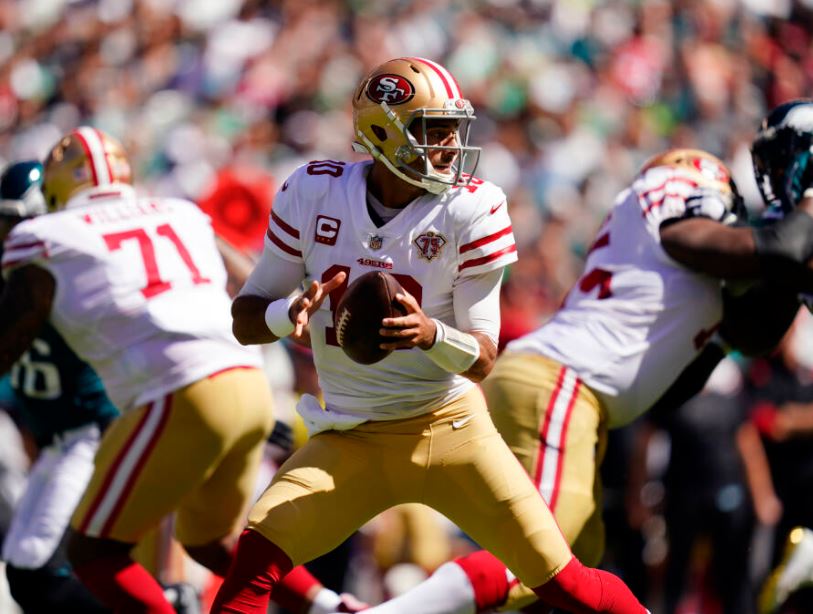 The San Francisco 49ers put an end to their four-game losing streak with a 33-22 victory at Soldier Field over the Chicago Bears. With the victory the 49ers keep their playoff hopes alive.

Here are the answers to the five questions I asked before the game.

1. Will it be a happy homecoming for Jimmy Garoppolo? YES

Coming off one his worst game of the season and facing a Bears defense playing without star pass rusher Khalil Mack, Jimmy Garoppolo rebounded with one of his best performances since 2019.

Garoppolo completed 17 of 28 passes for 322 yards against the Bears. He also ran the ball in for two touchdowns during the second half.

During the first half the 49er’s passing game was slowed a bit by drops, Deebo Samuel had two on the opening possession a Mohamed Sanu dropped another on third and seven to end another drive.

Things turned around late in the second quarter. Taking possession with only 1:15 left to play Garoppolo would find Brandon Aiyuk with a pair of completions to gain 21 yards and move the chains. Garoppolo then hit Deebo Samuel with on a deep post for a gain of 50 yards to set up a field goal as time expired.

Garoppolo would continue his hot finish during the second half. He completed 7 of 9 passes for 159 yards and running the ball in for two touchdowns while leading the 49ers offense to 24 second half points.

After emphasizing techniques to limit the defensive pass interference penalties that have plagued the 49ers this season, they would not be called for any against Chicago.

Some of that probably had to do with soft coverage in the secondary to force Chicago rookie quarterback Justin Fields to throw the ball underneath and be consistent. We won’t know if the issues have been fixed until quarterbacks throw the ball down field like we saw with Aaron Rodgers, and Carson Wentz.

After committing eight turnovers during their four-game losing streak, the 49ers offense was able to not turn the ball over for the first time since their week two victory over Philadelphia.

3. Can the 49ers take advantage of Justin Fields? NO

The rookie completed 19 of 27 passes for 175 yards with one touchdown and one interception. He also ran the ball 10 times for 103 yards and a touchdown.

Fields flashed the dynamic play making ability that made him one of the top quarterback prospects in the draft. He repeatedly was able to beat the 49ers defense with short throws and beat them with his legs when needed.

The highlight of his day came in the fourth quarter with Chicago down 23-16 and facing fourth and one at the San Francisco 22-yard line. Fields would roll to his right after a play fake only to find Arik Armstead in his face. The rookie would make Armstead miss and then weave his way through the rest of the San Francisco defense for the touchdown.

4. If the 49ers get the run game going can they keep it going? YES

San Francisco found something that would work against the Chicago defense, and they kept coming back to it when they needed a big play.

Elijah Mitchell gained 137 yards on 18 carries, but it was his three most explosive runs that paved the way for those numbers. The 49ers found success with the toss sweep the left side, gaining 92 yards on three of them.

The 49ers opened their second possession of the game with a toss to Mitchell sweeping around the left side for a gain of 26. The possession would end with a field goal.

On San Francisco’s third possession of the second half Kyle Shanahan would go back to this play and Mitchell would gain 27 yards. The possession would end with a five-yard touchdown run by Jimmy Garoppolo on a read-option keep.

Finally with a 30-22 lead late in the fourth quarter Shanahan would call the toss sweep to the left once again, this time Mitchell would rip off a 39-yard gain to set the 49ers up in field goal position.

After going away from the counter runs that were working early against Indianapolis last week, it was good to see Shanahan keep going back to what had worked.

5. Can San Francisco stop the Bears running game? NO and YES

The 49ers defense struggled to contain the running of Justin Fields throughout the game, and rookie Khalil Herbert was able to slash through the 49ers defense until getting banged up as well.

The two rookies led a Chicago running game that would gain 176 yards on 36 attempts.

The difference in this game however was the ability of the 49ers defense to adjust. After allowing Herbert to run through them for 66 yards on 13 carries in the first half, mostly on runs to the left side, the 49ers defense made the necessary adjustments at halftime. In the second half the San Francisco defense was able to hold Herbert to only six yards on 10 carries.

This article has 33 Comments