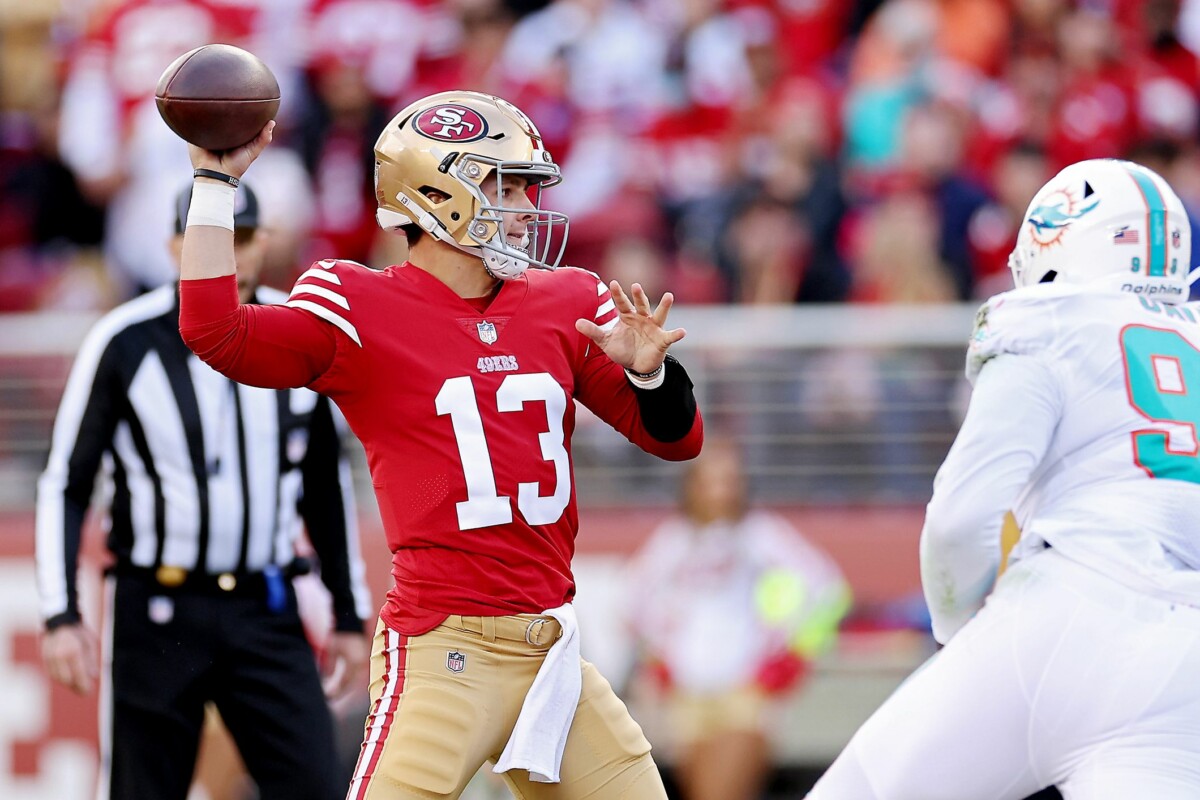 The San Francisco 49ers took down the Miami Dolphins 33-17 on Sunday afternoon at Levi’s Stadium. With the victory San Francisco extended their longest winning streak since 2019 to five in a row and improved to 8-4.

Here are the answers to the five questions we asked prior to the game.

1.) Can Jimmy Garoppolo get the offense into the endzone? No, but Brock Purdy can.

Jimmy Garoppolo completed a pair of passes for 56 yards on the Niners opening drive before injuring his foot while being sacked on third down.

According to Kyle Shanahan, Garoppolo sustained some broken bones which will require surgery and end his season.

With Garoppolo in the locker room, it was time for Brock Purdy.

Purdy missed some open throws early, but as the game went on, he proved he was up to the task.

As time wound down in the first half Purdy led the 49ers offense down the field, hitting Christian McCaffrey from three yards out. Purdy threw the ball on nine of eleven plays to set up the score.

San Francisco cracked the redzone twice with Purdy. The rookie put the ball into the endzone both times, hitting Kyle Juszczyk from three yards out before the connection with McCaffrey.

It was a terrific performance from Purdy who completed 25 of 37 attempts for 210 yards and two touchdowns and only one interception which came on a fourth down shot. He will make his first NFL start next week against Tom Brady.

As has been the case all season San Francisco’s running game was inconsistent on Sunday.

The 49ers ran the ball 31 times for 124 yards before Purdy took a knee three times to end the game.

Although the numbers don’t look great, San Francisco was able to run the ball well when it was most needed.

After taking over possession with only six minutes left to play a nine-yard run by Deebo Samuel followed by a 30-yard dash from Christian McCaffrey led to a 48-yard field goal from Robbie Gould to put the game away. During the ten play, 39-yard drive San Francisco was able to take nearly four minutes off the clock.

McCaffrey finished as the leading rusher with 66 yards on 17 carries. McCaffrey also caught eight passes for 80 yards and a touchdown.

Rookie Jordan Mason made his presence felt. The undrafted free agent picked up 51 yards on eight carries. Most of Mason’s yards came off zone runs which take advantage of his vision and quickness.

3.) Can the 49ers defense take away the middle of the field? YES

Tua Tagovailoa came into Sunday with a clear strength, completing passes into the middle third of the field.

He made a few big plays in that area, hitting Trent Sherfield for a 75-yard touchdown on the first play of the game and Tyreek Hill from 45 yards out in the fourth quarter.

In between those two explosive plays the San Francisco defense did a good job of taking away that area of the field and Tagovailoa struggled.

With Miami forced to throw elsewhere, Tagovailoa missed open receivers with inaccurate throws, hitting only 16 of 31 attempts for 175 yards. Jimmie Ward and Deommodore Lenior each came away with an interception of Tagovailoa.

Fred Warner also played a large role in the 49ers ability to slow down Miami’s passing attack. The middle linebacker was responsible for two of San Francisco’s six pass break ups on the day.

4.) Will San Francisco’s defense be able to take away their former teammates? YES, with one exception.

Raheem Mostert and Jeff Wilson Jr. were complete nonfactors in this game. The former 49ers running backs touched the ball only eight times for 33 yards.

Trent Sherfield fared much better, taking a short slant 75 yards to the house on the opening play of the game. He did not catch another pass the rest of the game.

River Cracraft made a pair of catches totaling 29 yards on three targets.

5.) The teacher or the pupil? The Teacher

Kyle Shanahan improved to 13-7 against his former assistants.

Forced to go with the quarterback who started the season third on the depth chart, Shanahan put together a master class in game management.

As Purdy struggled to get into a rhythm early on, Shanahan took the pressure off by focusing on the run game.

With the game tied late in the first half Shanahan put the whip to the offense and Purdy responded with a touchdown drive.

Shanahan showed aggressiveness on a couple of occasions. Facing fourth and four at the Miami 39 late in the second quarter, Shanahan dialed up a deep pass down the right sideline to Brandon Aiyuk. Although Purdy’s pass wound up being intercepted, the call gave Aiyuk a chance to make a play and the result was like a punt.

During the second 49ers possession after the half, Shanahan again went for it on fourth down. This time Purdy was able to pick up the first down with a sneak. Although San Francisco was forced to settle for a field goal a few plays later, the extra downs helped to extend the drive and take time off the clock.

San Francisco finished with over 40 minutes of possession for the game. Keeping the Miami offense helped the 49ers defense and played a large role in the victory.