Things change quickly in the NFL.

Two weeks ago, the San Francisco 49ers found themselves two games under .500 after an embarrassing loss to an Arizona Cardinals team missing many of its starters.

In six days, the 49ers turned their entire outlook around with wins over the Los Angeles Rams and Jacksonville Jaguars. This  two-game win streak has placed them squarely in the fight for a spot in the NFC playoffs, and that’s exactly where they will be with a win over the Minnesota Vikings on Sunday at Levi’s Stadium.

It should be no surprise that this week’s mailbag starts off with a Vikings related question. 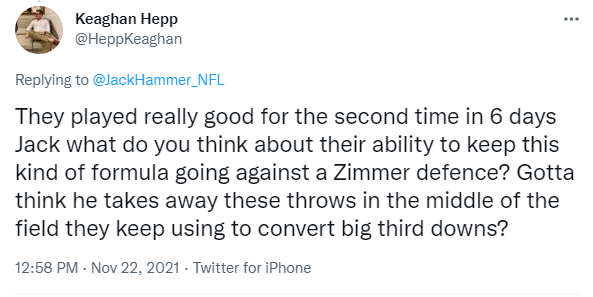 This is a question that I’ve heard several times. It’s no secret that Jimmy Garoppolo is at his best on throws over the middle of the field, yet teams struggle to stop this from happening.

What we’ve seen over the last two weeks in particular is a 49ers run game that creates conflict for opposing linebackers and safeties. If the second level defensive players don’t step up to stop the run, San Francisco’s renewed commitment to the ground game will slowly chew up yards and time off the clock. The downside for the defense is it opens the necessary space for 49ers receivers to work over the middle, and Garoppolo has the ability to get the ball out of his hand before the defenders can recover.

Garoppolo has faced Mike Zimmer’s defenses twice during his time with the 49ers, to open the 2018 season and in the divisional round of the NFC playoffs the following year. In those two contests, Garoppolo threw four interceptions to only two touchdowns and completed only half of his pass attempts.

If Minnesota’s defensive line can take away the run and allow the linebackers to slow play the run, this could be a very difficult matchup for Jimmy Garoppolo.

I don’t think it should be expected that San Francisco will be able to continue running the ball as often as they have over the last two weeks. Getting to that number has been as much a product of playing with a lead as it has with making the commitment to run the ball.

Time and time again we have seen Kyle Shanahan abandon the running game once the team gets behind, which will put the game more on the shoulders of Jimmy Garoppolo.

We’ve seen the 49ers need to rely on Garoppolo at times this season. The win in Philadelphia is the first to come to mind. San Francisco struggled to run the ball against the Eagles, so it was up to Garoppolo to make the throws necessary to lead the team down the field late in the first half to take the lead.

The following week against Green Bay the 49ers fell behind 17-0 in the first half before Garoppolo was able to rally the offense and eventually take a 28-27 lead with only 37 seconds left in the game.

The short answer to this: they won’t.

What we’ve seen take place over the early part of games the last two weeks has been a kind of perfect storm.

The quick turnover by Los Angeles gave San Francisco the ball deep in their own territory in a tie game. This allowed Kyle Shanahan to get the running game going without being behind and being backed up like the offense was played a role in extending the time of the possession. Same scenario on their second possession in that game.

In Jacksonville, it was much of the same. A misplay by Trenton Cannon on the kickoff forced the offense to start off deep in their own territory, and they methodically moved the ball down the field.

The 49ers offense was much more explosive on the following possessions, opening the second drive of the game with a 34-yard pass to Brandon Aiyuk and finishing with a 25-yard run by Deebo Samuel.

San Francisco has received a good mix of methodical and explosive drives the last two weeks, which has helped to keep their defense off the field. They’ll need to do it again this week if they are going to defeat Minnesota.

Nick Bosa will be in the discussion for NFL Comeback Player of the Year. Coming off a torn ACL that limited him to only 68 snaps in 2020, Bosa has already set a career high in sacks with 10 in as many games.

The main challengers that Bosa is facing are Dallas quarterback Dak Prescott and Cincinnati quarterback Joe Burrow. If Prescott can lead Dallas to a better record and a spot in the playoffs, it is likely the award will go to him. Right or wrong, voters tend to lean more towards quarterbacks in these situations.

This question stems from San Francisco currently having only approximately $12.471 million in cap space for 2022 with only 32 players under contract.

The fastest way for the 49ers to free up cap space would be releasing Jimmy Garoppolo and committing to Trey Lance for 2022. This move would free up $25.6 million in salary cap space. It’s important to note that some of that total would need to be reallocated to either a veteran backup through free agency or a quarterback that is selected through the draft.

Given their history at the position, it is hard to see Kyle Shanahan and John Lynch moving on from Garoppolo without a quality replacement in place.

The Dee Ford situation is not a favorable one for the 49ers from a salary standpoint. Moving on from Ford would only save the team $2.09 million in cap space and create a dead cap charge of approximately $9.8 million.

Since we are on this topic, two players the 49ers may want to look at re-signing this offseason could be safety Jimmie Ward and defensive lineman Arik Armstead. Ward and Armstead will combine to take up $32.965 million in cap space for 2022. Both are considered part of the teams core by the front office, and addressing their contracts could free up space to assist with free agency and having the necessary cap space to sign their draft class.

This article has 22 Comments