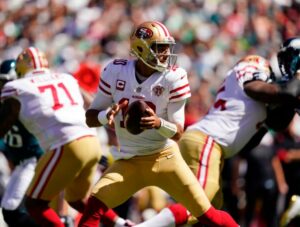 This is the live blog for the 49ers week 4 game against their NFC West rival Seattle Seahawks. I will provide updates and analysis throughout the game.

Rookie cornerback Ambry Thomas will be active for the first time since week one against Detroit.

12:41 The  offensive and defensive lines need to step for the 49ers to have a chance today.

1:04 49ers win the toss and defer to the second half. Seattle will be on offense to start the game.

1:07 Defense forces a quick three and out. Wilson incomplete to Metcalf on 3rd down. Dontae Johnson is the starting Nickelback.

1:18 Robbie Gould injured his groin during warmups and is questionable to return.

1:20 Dee Ford sacks Russell Wilson on 3rd and 7 to force another Seattle 3 and out. What a start for the 49ers defense.

1:26 Garoppolo intercepted by Quandre Diggs. Looked to his right, came back middle to George Kittle and didn’t see the safety.

1:29 The 49ers defense holds Seattle for another 3 and out after the interception. Nick Bosa ends the possession with the second sack of Russell Wilson in the first quarter.

1:36 How’s this for a turnaround? The 49ers defense does not allow a first down in the opening quarter and they have outgained Seattle 167 to -3. 49ers 7 Seahawks 0

1:46 Another 3 and out forced by San Francisco. This time it is Javon Kinlaw and Dee Ford that sack Wilson on third down.

1:55 49ers offense moves the ball out to the 41, but Garoppolo throws incomplete to Aiyuk on third down to end the drive. San Francisco is dominating this game, but have allowed Seattle to stay in the game. Not good.

2:00 Fifth straight Seattle three and out to start the game. Emmanuel Moseley with the pass breakup on third down.

2:05 After a nice run by Trey Sermon to open the drive, Seattle stops him for loss of one on the next play and on third down Garoppolo’s pass to Kittle is knocked away. The 49ers need to keep running the ball to the left. They’ve had a lot of success with that today.

2:14 After being completely dominated in the first half Seattle drives 80 yards on 8 plays to tie the game. San Francisco had chances to blow this game open and couldn’t do it. Now it’s a ball game. 49ers 7 Seahawks 7

2:21 49ers pick up a first down, then Trent Sherfield has a pass go through his hands and Kyle Juszczyk can only get eight yards on 3rd and 10.

Jake Brendel replaced Alex Mack during that last possession. Mack is in the locker room after having his right arm/hand looked at on the sideline.

2:41 Trey Lance replaces Garoppolo to start the second half. The 49ers announce Garoppolo has a calf injury. Offense runs the ball 4 times and punts.

Also, Alex Mack is questionable to return with a hand injury.

2:46 After Russell Wilson scrambles for 12 yards on first down, the 49ers defense is able to hold. Emmanuel Moseley knocked the ball out of Metcalf’s hands on a deep ball along the right sideline on third down to force the punt.

2:56 Trey Lance misses George Kittle with an easy throw on first down and then overthrows Deebo Samuel on third down. What a start.

3:01 Seattle drives the ball down for a touchdown. Arik Armstead gives up contain on Russell Wilson and Javon Kinlaw can’t chase the quarterback down as he runs it in from 16 yards out. Seahawks 14 49ers 7

.3:06 Trenton Cannon fumbles the kickoff return. Seattle ball on the 49ers 14 yard line. This game is over if Seattle scores a touchdown.

3:08 Ball game. Russell Wilson escapes a sack and find Freddie Swain in the right corner of the endzone to give Seattle a 21-7 lead.

3:15 Trey Lance hits Deebo Samuel for a 76-yard touchdown, his second in the NFL. The 49ers lined up to go for two, but jumped offside so Kyle Shanahan chose to try the FG and Wishnowsky missed for the second time in the game. Seahawks 21 49ers 13

3:18 Left tackle Trent Williams has been taken to the 49ers locker room on a cart.

3:29 Seattle drives 81 yards on 10 plays, finished off on a 14-yard Alex Collins run. The big plays on that drive were Dee Ford lining up offsides on 3rd and 6 to negate an incompletion and Dre Kikpatrick getting called for a 23 yard pass interference.

3:36 Three and out for the 49ers offense. The insertion of Trey Lance at quarterback haven’t done much to help the offense.

3:50 On 4th and 2 Kyle Shanahan calls a sweep to Deebo Samuel that gains only one. It feels like he gave up on this game when Seattle went up 21-7.

4:09 Great garbage time drive by the 49ers offense ends with Lance hitting Deebo Samuel for an 8-yard touchdown pass. Lance then runs it in for the 2-point conversion. Seattle 28 49ers 21. Onside kick coming up.

Be back in a little bit with the game report.

This article has 126 Comments