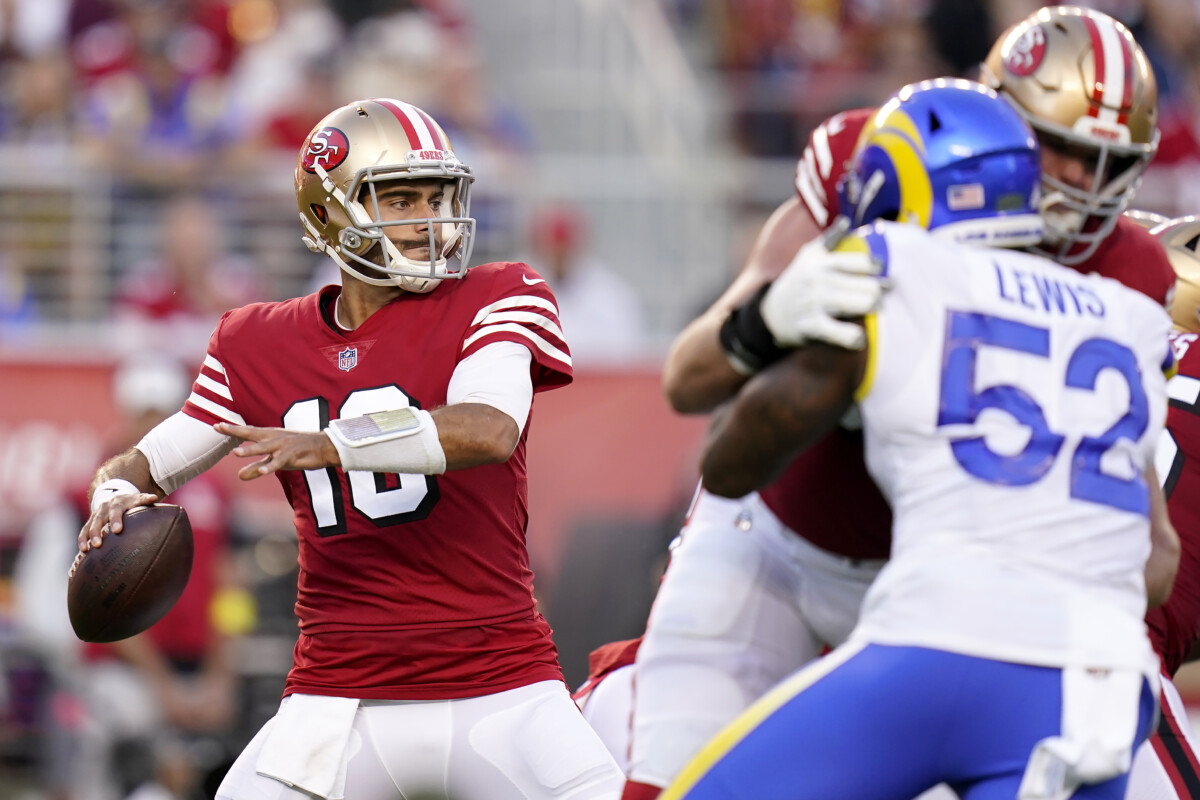 The 49ers season flashed before their eyes Sunday afternoon.

On San Francisco’s first possession of the second half Jimmy Garoppolo was flushed out of the pocket. The quarterback ran out to his right and fired a pass to Brandon Aiyuk. Just after the ball left his hand Garoppolo was struck on his left knee by Saints defensive lineman Malcom Roach.

Garoppolo grabbed at his left knee, the same knee which he injured in 2018, the pain visible on the quarterback’s face. After a moment he stood up and limped to the huddle and went on to finish the remainder of the game.

Let’s face it. If Jimmy Garoppolo goes down at any point this season for an extended period San Francisco’s hope of winning the Super Bowl vanishes.

There has been speculation that Trey Lance might be able to return from a broken ankle and resume practice at some point this season.

It’s not out the realm of possibility.

Teams are allowed to bring a maximum of eight players off injured reserve in a season. San Francisco has so far used up six of those.

While getting Lance back onto the practice field would be beneficial to his long-term development, I don’t believe it changes the outlook for the Niners if they were to lose Garoppolo.

San Francisco went into this season expecting growing pains with their new starting quarterback. The expectation was they had enough talent throughout the roster to manage their way through any early rough patches and Lance would improve as the season went along.

Instead, Lance went out after only five quarters and has only recently begun throwing and running.

Throwing a second-year quarterback with only three starts and has missed over three months of practice into the fire for a playoff game is not a recipe for success.

The only other alternative for San Francisco is Brock Purdy. Taken with the last pick of this year’s draft, Purdy has taken just 18 snaps. The rookie completed four of nine passes for 66 yards and an interception.

San Francisco has made two playoff runs in recent years with Garoppolo. The Niners reached the Super Bowl in 2019 and the NFC Championship game last year.

The 49ers winning formula remains the same, play complementary football and limit mistakes. Garoppolo has shown an improvement in the latter. For the first time in his career the veteran quarterback has not thrown an interception in four consecutive games.

Perhaps that improvement will be enough to help the franchise win its first Lombardi Trophy since 1994.

This article has 41 Comments