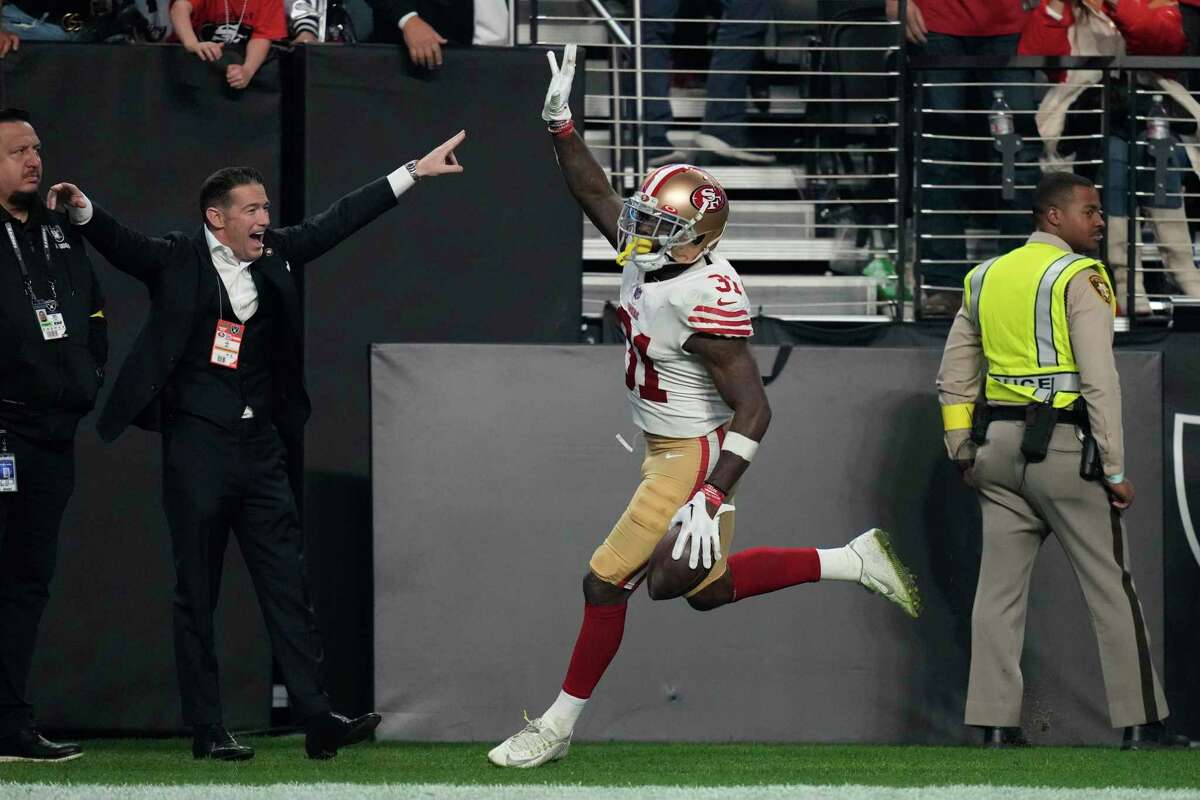 The San Francisco 49ers took down the Las Vegas Raiders 37-34 in a wild back and forth affair on New Year’s Day at Allegiant Stadium in Las Vegas.

In a game that featured several big plays from both teams it was the 49ers defense that made the deciding play. On the opening possession of overtime, Tashaun Gipson intercepted Raiders quarterback Jarrett Stidham and returned the ball down to the Raiders seven.

After missing a 41-yard field goal as time expired in regulation Robbie Gould connected on a short field goal to win the game.

With the victory and a loss by Minnesota in Green Bay, the 49ers moved into the second seed in the NFC playoff race. A win on Sunday over Arizona along with a Philadelphia loss to the New York Giants would give the 49ers homefield advantage for the playoffs.

Here are the answers to the five questions asked prior to the game.

Brock Purdy continues to answer the bell week in and week out.

Purdy opened the game with touchdown passes on the 49ers first two possessions. The two touchdown passes made Purdy the first 49ers quarterback since Jeff Garcia in 2001 complete the feat five weeks in a row.

Trailing by ten in the second half, the first time he’s been in this situation with the 49ers, Purdy went 15-25 for 246 yards while leading San Francisco to 23 points after the break.

Purdy’s biggest throw of the second half came on one of his shortest. With a Raiders blitzer in his face the rookie quarterback was able to get the ball out to Christian McCaffrey for a 38-yard gain on a screen. San Francisco scored to go ahead 34-27 on the play.

Led by 121 yards from Christian McCaffrey the 49ers ran the ball for 170 yards on only 27 attempts. McCaffrey had a rushing touchdown and finished with 193 total yards from scrimmage on 25 touches.

Following Purdy’s big completion to McCaffrey mentioned above Jordan Mason took the ball around the left side to score from 14 yards out. The touchdown was Mason’s first regular season score of his career.

As is usually the cast, the 49ers wide receivers also got into the act. Brandon Aiyuk picked up 16 yards on one carry to set up McCaffrey’s touchdown run. Rookie Danny Gray picked up nine yards on a run around the right side in the second half.

3.) A record setting performance for Nick Bosa? NO

Although Nick Bosa didn’t record a sack, he certainly made his presence felt. The Pro Bowl defensive end recorded five hits on Jarret Stidham, none more important than the one he made on the fourth play of overtime.

On the fourth play of overtime Bosa pushed Raiders left tackle Kolton Miller into the quarterback. Contact from the back of the tackle caused the ball to flutter through the air and Tashaun Gipson made the play to record the interception and set up the game winning field goal.

4.) Will the defense be prepared for Jarrett Stidham? NO

Neither of Stidham’s two interceptions were of his own doing, but they were key to the 49ers victory.

On the second play of the fourth quarter 49ers defensive tackle Kerry Hyder Jr. leapt into the air to get his hands on a Stidham pass. Rookie defensive tackle Drake Jackson came down with the ball for his first career interception. San Francisco tied the game at 24 a few plays later.

5.) Can the 49ers stop Josh Jacobs? No, except when it mattered most.

Josh Jacobs gave the 49ers defense everything it could handle. With 69 yards on 17 carries Jacobs became the first back to gain over 59 yards on the 49ers this season.

It was the yard Jacobs couldn’t pick up that he will remember from this game.

Trailing by four late in the second quarter Raiders head coach Josh McDaniels chose to go for it on fourth and inches from the 49ers two.

Arik Armstead beat his man to get into the Raiders backfield and drop Jacobs for no gain.