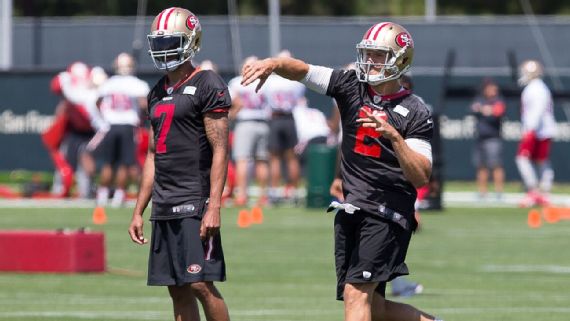 SANTA CLARA – Here’s what stood out to me during the second day of training camp.

1. CB Jimmie Ward. Picked off a Blaine-Gabbert pass intended for Bruce Ellington on third-and-three and returned the interception for a touchdown. “I just disguised my coverage,” Ward said after practice. “We were in man-free, and I kind of confused the quarterback. Then I ended up jumping outside to my leverage I was supposed to have and I knew where my help was. And he ended up throwing me the ball, and I just made a play on it…That was a correction from yesterday. I got beat on that route the first day. It was an option route from the slot. So we went in (the) film (room), he told me what to do and we made corrections.”

2. DE DeForest Buckner. Joined the starting lineup for the first time this offseason and played both left and right defensive end in the 49ers’ base defense. He seems like a lock to start until Glenn Dorsey returns.

3. DE Arik Armstead. The best player on the field today. Recorded at least three tackles for loss during 11-on-11s, including once when he broke into the backfield so quickly he smacked the ball out of Carlos Hyde’s hands before Hyde had taken a single step.

4. WR DeAndre Smelter. Played split end and made three catches during team drills. First, he beat Jimmie Ward with a quick slant. Then, he beat Kenneth Acker with a quick slant. And then he caught a tunnel screen pass thrown by Colin Kaepernick. By the end of practice, Smelter was playing with the starters. He seems to be Quinton Patton’s primary competition for the starting split-end job.

5. WR DeAndrew White. The slot receiver for the second-team offense. White beat nickel back Chris Davis twice with option routes on third down – once on third-and-3, and once on third-7. Both passes were thrown by Kaepernick. He and White seem to have chemistry.

6. QB Colin Kaepernick. Threw no interceptions and completed 16 of 20 passes, although just six of those passes came when he was playing with the starters. Kaepernick mostly played with the backups and seemed much more prepared and confident than yesterday even though he didn’t attempt a deep pass. Kaepernick mostly dinked and dunked while reading one side of the field.

1. QB Blaine Gabbert. First, the good. Threw 20 of his 23 passes while playing with the starters and launched a perfect deep pass down the left side line to Jerome Simpson who caught the ball in the end zone. This was the best pass of the day. Now, the not so good. Gabbert threw one pick and completed just 14 of 23 passes during team drills. On third down, he completed only one pass and threw short of the first-down marker three times even though it was a 7-on-7 drill and there was no pass rush. At least he practices the way he plays.

This article has 136 Comments