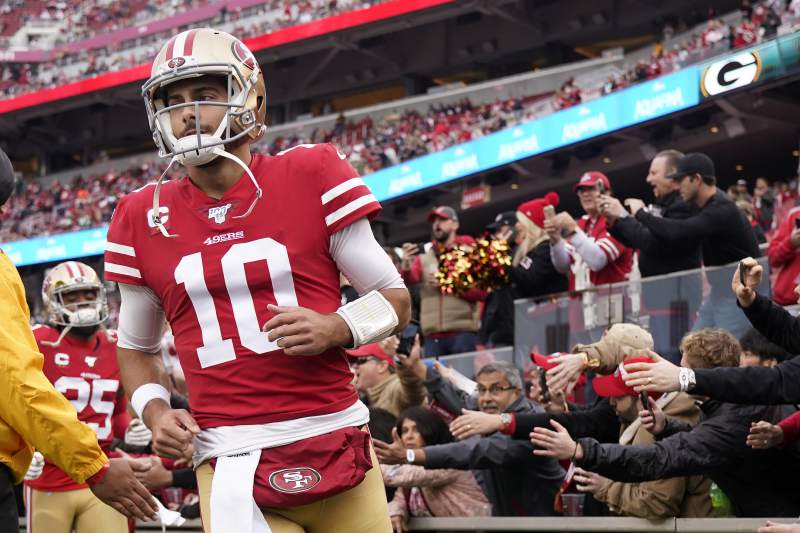 SANTA CLARA — This is the blog for the NFC championship between the 49ers and Packers. I will update this frequently with information and analysis from the press box.

2:31 Here are the Packers’ inactives:

3:38 The Packers win the toss and defer. The 49ers will receive the opening kickoff.

3:43 On third and 1, Tevin Coleman rushes for no gain, and the 49ers go three and out. Coleman ran the ball all three plays. The Packers get the ball at their 24-yard line after the punt.

3:47 On third and 3 from the Packers 48, Aaron Rodgers completes a pass in the flat to running back Jamaal Williams, but Dre Greenlaw tackles him one yard shy of the first d0wn. The Packers punt, and Richie James Jr. makes a fair catch at the 49ers’ 11.

3:55 On third and 8, Kyle Shanahan calls a run up the middle for Raheem Mostert, who sprints through the Packers defense for a 36-yard touchdown. He makes the game look so easy. The 49ers lead 7-0.

4:09 On third and six, Kyler Fackrell sacks Jimmy Garoppolo for an eight-yard loss. Garoppolo should have thrown the ball away. No one was open, partially because George Kittle stayed in the backfield to block.

4:17 On third and 7, K’Waun Williams blitzes and strips the ball from Rodgers. The Packers recover and punt, but their punt travels just 23 yards. The 49ers take over at the Packers’ 37.

4:28 On second and 5 from the Packers’ 9, Raheem Mostert runs for his second touchdown of the game, and the 49ers lead 17-0. Tevin Coleman left the field on a cart with a shoulder injury.

4:36 On second and 5 from the 49ers 25, Aaron Rodgers fumbles a perfectly good snap, and DeForest Buckner recovers. That was all on Rodgers. Good snap.

4:48 Robbie Gould makes a 27-yard field goal and the 49ers lead 20-0. Kittle hasn’t received a pass yet, and Raheem Mostert already has run for 130 yards and two touchdowns.

4:53 On second and 15 from the Packers 22, Emmanuel Moseley intercepts Rodgers at the Packers’ 30.

5:06 The Packers will receive the ball when the second half starts.

5:27 On first and goal from the 9, Rodgers completes a screen pass to Aaron Jones, who scores a touchdown. The 49ers lead 27-7. That was an 11-play drive for the Packers, who should have made these adjustments during the second quarter.

5:59 On first and 10 from the 49ers’ 43, Rodgers completes a 42-yard pass to Jimmy Graham. Aaron Jones scores a one-yard touchdown run on the next play.

6:06 The 49ers run three times and go three and out. Garoppolo hasn’t attempted a pass since the second quarter.

6:15 On first and goal from the 8, Rodgers scrambles to his right and fires a touchdown pass to backup tight end Jace Sternberger, and the Packers trail 34-20 with 8:13 left. Garoppolo may have to throw another pass in this game.

6:31. Garoppolo throws one more pass, and completes it to George Kittle for 19 yards. This was Kittle’s first catch. Afterward, the 49ers run the ball into field-goal range, where Robbie Gould makes a 42-yard field goal. The 49ers lead 37-20.

6:41 On first and 10 from the Packers 38, Rodgers overthrows a deep pass to Davante Adams, and Richard Sherman makes the interception at the 49ers’ 7-yard line.

6:46 The 49ers are going to the Super Bowl. Stay tuned for my game story and report card.

This article has 270 Comments