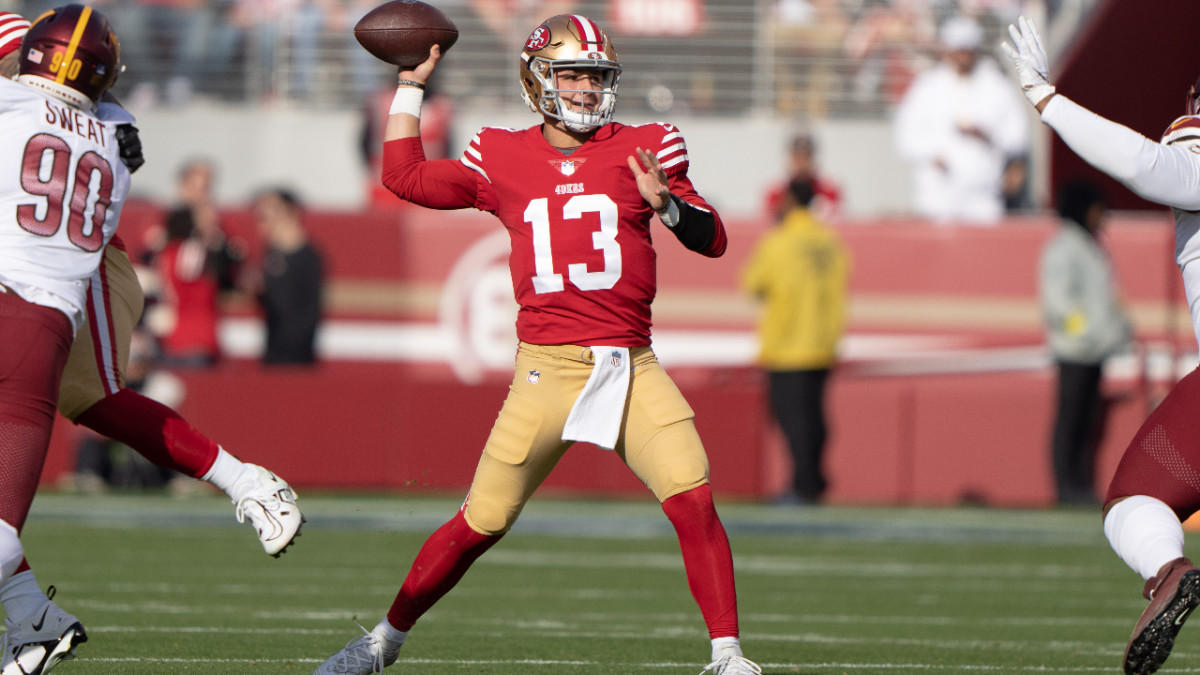 The San Francisco 49ers will look to extend their current eight game win streak when they face the Las Vegas Raiders on New Year’s Day at Allegiant Stadium in Las Vegas.

San Francisco could move into the second seed in the NFC playoffs with a win and loss by Minnesota to Green Bay.

The Raiders appear to have begun preparations for 2023. Out of the playoff race with a 6-9 record, Las Vegas sent starting quarterback Derek Carr home for the remainder of the year. In a pair of their top defenders were placed on season ending injured reserve this week.

Here are five things to watch for during the game on Sunday afternoon.

After facing three defenses ranked 17th or higher in net yards per pass allowed, Purdy gets to take on a Raiders defense which is currently 26th in this category. San Francisco currently has the fourth highest net yards per attempt in the league.

Potentially helping Purdy’s cause on Sunday will be the absence of Chandler Jones. The 4.5 sacks by Jones are behind only Maxx Crosby’s 11.5. No other Las Vegas defender has recorded at least two sacks this season.

San Francisco’s run game has been strong of late. Over the last three weeks the 49ers have averaged 5.5 yards per rush attempt. Christian McCaffrey has led the way with 273 yards on 55 carries over that span.

Behind McCaffrey the Niners have received solid outings from rookies Jordan Mason and Ty Davis Price. Mason gained 100 yards on 15 carries against Tampa Bay and Seattle before being limited to special teams duty last week.

Ray-Ray McCloud made his presence felt in the run game also. Playing in place of Deebo Samuel, McCloud took a sweep around the right side 71 yards for a touchdown. The run was the 49ers longest of the season.

The Raiders come into this game allowing only 4.3 yards per rush, good for 13th best in the league. Las Vegas will be without linebacker Denzel Perryman. Perryman leads the Raiders in tackles but was place on injured reserve with a shoulder injury earlier this week.

Recently named to the Pro Bowl, Nick Bosa is having the best season of his career. The defensive end has 17.5 sacks on the season, just two short of the 49ers single season record currently held by Aldon Smith.

The Las Vegas offensive line has been one of the best in the league at protecting the quarterback. They have allowed an average of only two sacks per game this season.

A change from Derek Carr to Jarrett Stidham may help Bosa in his quest to break the 49ers record and chase down Michael Strahan’s NFL single season record of 22.5.

4.) Will the defense be prepared for Jarrett Stidham?

Las Vegas made news at the beginning of the week by announcing Jarrett Stidham would replace Derek Carr at quarterback for the final two weeks.

There is not much film of Stidham to work off. His only throws during this regular season came in week eight against New Orleans. Against the Saints he finished 8-13 for 72 yards. That lack of tape may work against the 49ers. It’s not uncommon for a backup quarterback to come in and play well for a week or two.

Over the last five weeks Las Vegas has given the ball up ten times. Nine of those were from interceptions off the right arm of Carr.

If Stidham is functional, the switch could help the Raiders turn things around.

The 49ers defense has not allowed an opposing running back to rush for over 59 yards on them all season. Brian Robinson Jr. came close last week, picking up 58 yards on 22 carries.

Next up for the 49ers defense is Josh Jacobs.

Jacobs has run for over 59 yards in 12 of 15 games this season. His rushing is a primary reason why Las Vegas has averaged the fourth most time per possession in the NFL.

The Raiders will need a big game out of Jacobs to keep the ball out away from the 49ers offense and not put Stidham in situations where the quarterback has to convert on third and six or more.

This article has 17 Comments