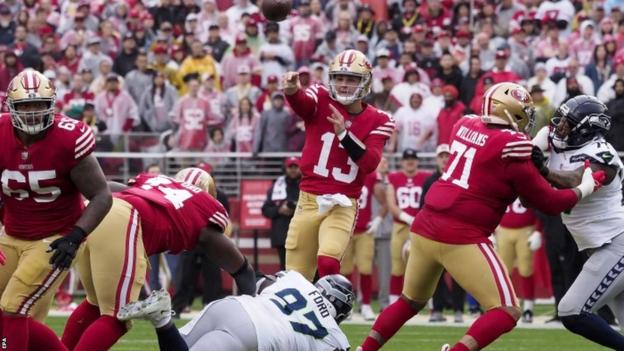 Is Brock Purdy a good quarterback or simply the product of a good system?

This question has begun floating around various social media platforms following the 49ers blowout win over Seattle. A game in which the rookie quarterback put together the best playoff performance by a San Francisco quarterback in nearly a decade. His 332 yards passing trail only Joe Montana for most in 49ers postseason history.

More than one analyst pointed out how San Francisco’s receivers are getting open, leading to few contested catches. According to CBS Sports, ten of Purdy’s 30 attempts went to receivers with more than five yards of separation. One analyst even went so far as to suggest Purdy has regressed since his first start.

Here’s the thing, having receivers running open through defenses isn’t anything new in San Francisco. It’s been commonplace since Kyle Shanahan took over.

The difference is now we are seeing a quarterback who can consistently hit those open receivers.

One example of this came on the opening play of the fourth quarter when Purdy hit Jauan Jennings deep down the left sideline for a gain of 33. It wasn’t a perfect throw, Purdy left it a little too far inside, but it was a big play. One that we had seen the two other quarterbacks miss this season.

As far as the suggestion Purdy has regressed, what are we doing here?

Despite having a few misses early in the game, the rookie quarterback bounced back to lead the 49ers offense to scores on eight of their nine possessions. He was nearly perfect in the second half, his only incompletions on 11 attempts coming when he threw the ball away to avoid a sack and a drop in the endzone after scrambling around to keep the play alive.

Purdy has proven himself at every turn. The next test will come when he takes on a Dallas Cowboys defense which has made life miserable for opposing quarterbacks.

Jimmy Garoppolo and Ambry Thomas did not practice on Wednesday as the 49ers held their first practice in preparation for Sunday’s game. Trent Williams also did not practice, taking a vet day as he usually does on the first day of practice during the season.

Jauan Jennings, Samson Ebukam and Javon Kinlaw were limited participants. Today marked the first time Kinlaw has participated in the first practice of the week following his return from injured reserve. The defensive tackle looked good during the open portion of practice.

Also of note, Jimmy Garoppolo and Trey Lance were both spotted in the 49ers locker room during media availability. Lance was walking with the help of a crutch and Garoppolo was moving around without his walking boot. The 49ers have yet to rule a potential return for Garoppolo during this postseason run.

This article has 47 Comments