This is the transcript of Colin Kaepernick’s Tuesday press conference, courtesy of the 49ers’ P.R. department. 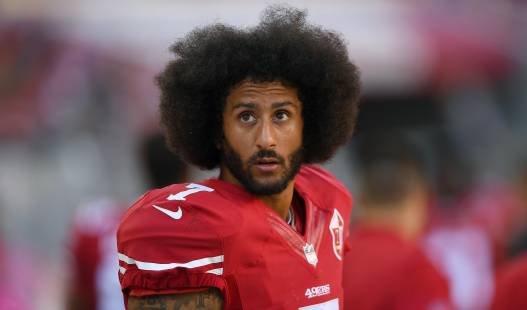 What did you do during the Bye Week from a football standpoint, first of all?

“Recover. Get your body back. Get it feeling good, feeling loose, ready to go for the next game.”

“It’s an event we wanted to put on to help give them the opportunity to succeed. Give them some resources, some knowledge that can help progress them, help them understand the current state of things as well as how to handle different situations and how to succeed in different situations.”

How involved were you in the curriculum?

“From top to bottom, it was something myself, my woman, our friends, we came together, we put it together as far as curriculum, the event, everything. So, we wanted to make sure it was something that was very grassroot, that was true to what we believed and the message wasn’t skewed or misrepresented or manipulated by a corporation that we had to stand behind.”

What did you get out of that experience?

“For me, it was amazing to see how engaged the kids were. Them being locked in, having very in-depth questions about things that are going on and different parts of the curriculum. And the positive feedback we got after, the excitement they had, for me that was exciting to see.”

Did you feel more helpful at that event or did you see just how much you meant to them?

“I would say both. Very helpful. It’s exciting to see the youth that have that strength, have that courage, have that intelligence to say our situation might not be the best, it might not be ideal but we can succeed through it regardless.”

Was there any moment or any one thing that someone said to you or came up to you or something that stuck out to you about the event?

“There was a 10-year old who asked a question in the kind of open forum session towards the end and the in-depth thought that was in that question, for a 10-year old, was to me something I said back after and was like, ‘Wow, that was impressive that you came up with that question.’ And for me, that’s exciting to see that the youth not only are just getting surface-level knowledge, but are forming their own ideas, opinions, their own thoughts. That’s something that we need.”

How would you sum up the state of the team going into the second half of the season?

You’ve had some pretty memorable games against the Saints in your career. Can you draw on that going into this week’s meeting?

“You know, I think you have to take each week differently and treat it as its own entity. Knowing some of the things that they’ve done in the past can always help you and one of the things that we’ve always said playing the Saints is you’re going to have to put up points. They have a very talented offense, very explosive offense. So, we’re going to have to be able to match up.”

Sorry for jumping around, back and forth, but the 10-year old question, what was that question?

“I don’t want to get into the details of what it was, but very in-depth, very thoughtful.”

You mentioned the message. What was your message for those kids?

With your new contract you now can be a free agent if you choose to after this season. Why was that important to you?

“It was something that we thought was mutually beneficial while doing the contract. That’s a long ways out. Where my focus is right now is the New Orleans Saints.”

Speaking of the Saints, the last time they played in the Bay Area was the playoff game in 2011. I don’t think you actually played in that game. You were a rookie. What are your memories and is there anything that pops to mind? Is it a play? Is it a moment?

What’s different about the team is same head coach, same quarterback as 2011, just giving them that consistency. How do the 49ers build that consistency here because you can see how that pays off for a franchise?

“Yeah. We have to build it week to week. Every practice, every day that’s something that you have to build upon and it does take time. But, we have to do everything we can to speed up that process.”

Through events like this and the stand that you’ve made this season, do you feel like people know the real Colin Kaepernick now or at least a little bit more so to where maybe your image has changed in people’s minds that didn’t know you previously?

Are you comfortable with that? Is it a comfortable feeling? I mean, you’re so football focused most of the time that we didn’t even really know you that well.

“Yeah. For me, there’s nothing to hide. There’s nothing that I’m afraid to say about my opinion and my stance and what I believe in because I know why I believe those things and I have knowledge to back that up.”

Your career trajectory has been different than most quarterbacks who come in and they might struggle initially and then they improve. You’re not struggling initially. Now, you are. Why is that? Why has there been a difference in your play as your career has gone on?

This article has 176 Comments