For the 2022 49ers, anything less than a Super Bowl victory will be a failure.

San Francisco came into this season with a roster regarded by many as the best in the NFL. The only question was whether new starting quarterback Trey Lance would be up to the task. 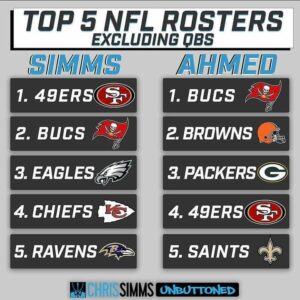 The quarterback question no longer exists.

Jimmy Garoppolo takes over for the remainder of this season. The 49ers have enjoyed great success when Garoppolo has been able to stay healthy.

In 2019, Garoppolo started all 16 games, leading San Francisco to a 13-3 regular season record.

Unfortunately, that regular season success has yet to carry over to the postseason. The 2019 team fell short, losing to Kansas City in the Super Bowl. They were one step away from a trip back to the Super Bowl in 2021. San Francisco ultimately fell to the Los Angeles Rams in the NFC Championship Game.

The 49ers offense has shown it can move the ball up and down the field behind a solid line and playmakers such as Deebo Samuel and Brandon Aiyuk.

With that core, the blueprint for success will be like what we saw over the second half of last season.

San Francisco will lean heavily on the run game and defense. With the quarterback being asked to move the chains off play action and short throws, which provide receivers opportunities to pick up yards after the catch.

The 49ers will also lean on its defense to keep up its strong start to the season.

For San Francisco to win the Super Bowl, they will need Jimmy Garoppolo to elevate his level of play in the postseason.

In Garoppolo’s six playoff starts he has thrown six interceptions to only four touchdowns and seen his quarterback rating drop from 98.4 down to 74.1.

That’s not the worst of it. In the fourth quarter of those playoff games, Garoppolo has posted a passer rating of 28.0. To put that in perspective, it’s the lowest number of any quarterback with at least 30 passes since 1991.

There’s no doubt the 49ers have one of the most talented rosters in the league.

To win a Super Bowl requires the quarterback to make a play at some point, and San Francisco will go as far as Jimmy Garoppolo can take them.

This article has 32 Comments