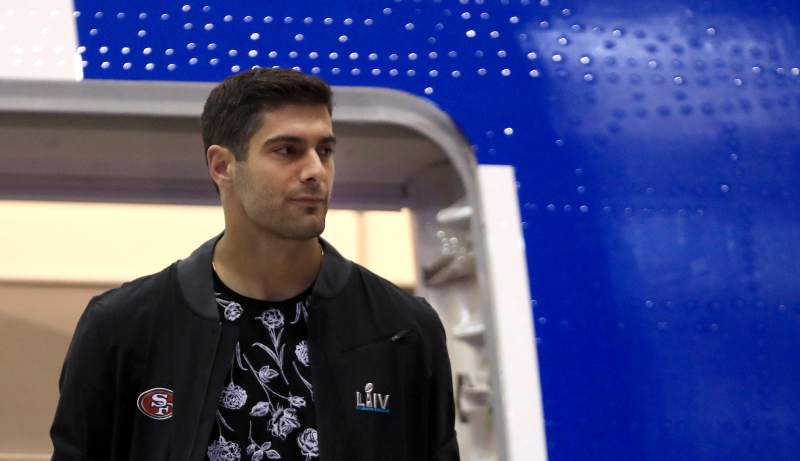 Today was the final day of interviews before the Super Bowl. Jimmy Garoppolo gave a formal press conference for the first time this week — he had been sitting at a podium for an hour each day answering questions from journalists who shouted at him from five feet away. A formal press conference allowed my fellow sports writers to speak quietly into a microphone one at a time and remain civilized human beings.

When I was watching Garoppolo’s press conference, I noticed he gives a little nod to punctuate the end of every answer he gives.

The nod is a brilliant tactic. It shows he really means what he says and makes everything sound reasonable. It makes me nod and feel I understand what he’s saying even if I don’t. I’m going to start using the nod in my daily life.

After Garoppolo finished talking, the media dispersed to interview the rest of the team. I find it fascinating to see which players the national sports writers find interesting and which players they couldn’t care less about.

They love Richard Sherman. They crowded around him five people deep every day.

They love Garoppolo. One “reporter” asked him to marry her. He dodged that bullet.

They love, love, love Raheem Mostert even though they probably hadn’t heard of him two weeks ago. They swarmed him daily and asked the same questions about the chip on his shoulder.

They love George Kittle, of course. Who doesn’t?

And they love Robert Saleh. They clearly believe he’s going to be a big-time head coach real soon. I think they find him more interesting that Kyle Shanahan.

Meanwhile, the national media doesn’t seem to know DeForest Buckner, arguably the 49ers best player. Every day, he sat a podium for an hour and fulfilled his media obligation as a team leader while sports writers mostly weren’t interested in him. He answered questions from one or two people while 35 journalists crowded around Mostert or Nick Bosa. Buckner looks like a wallflower at a dance. He deserved better.

Same for Jaquiski Tartt. He sat at a podium today and there was only one person interviewing him. I wanted to walk over and ask questions just so he wouldn’t feel ignored. He’s an excellent player who should be recognized this week, but he wasn’t. Most reporters didn’t know or care who he was. They cared more about asking 20 Kobe Bryant questions.

There’s something about Super Bowl week that brings out the worst in us and makes me see sports writers the way athletes do.  I never thought I’d write that.

This article has 8 Comments

Will the 49ers win this Super Bowl this season?