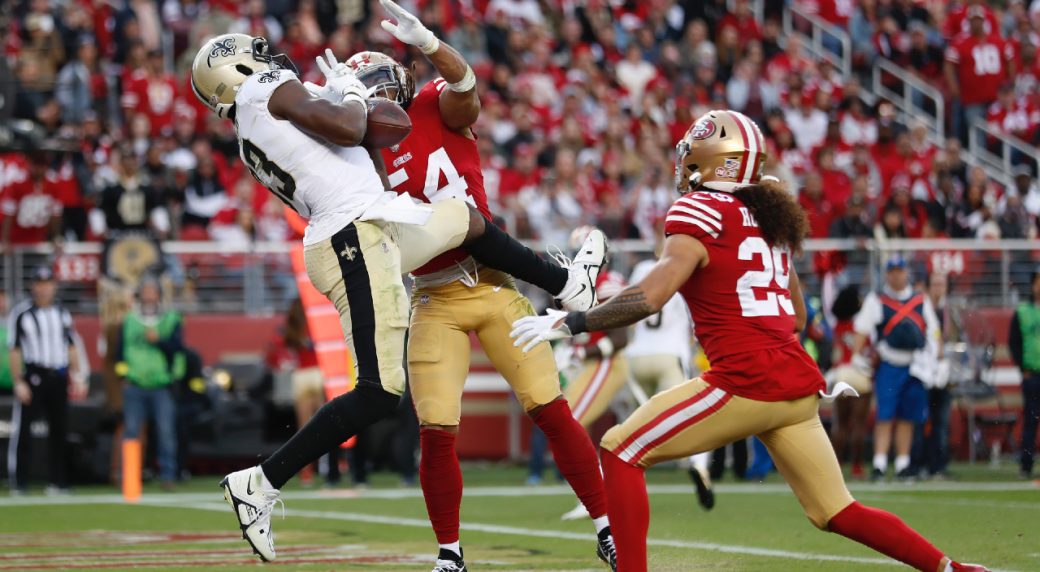 The San Francisco 49ers will look to extend their longest winning streak since 2019 to five in a row and improve to 8-4 when they face the Miami Dolphins on Sunday afternoon at Levi’s Stadium.

This is a homecoming of sorts for many Dolphins players and coaches including Mike McDaniel, Raheem Mostert, and Jeff Wilson Jr. among others.

The Dolphins will enter Levi’s Stadium with an 8-3 record following their 30-15 victory against the Houston Texans in week 12. Miami is riding a streak of four consecutive games scoring at least 30 points.

Here are five things to watch for during Sunday’s game.

1.) Can Jimmy Garoppolo get the offense into the endzone?

The 49ers offense has been able to move the ball up and down the field this season but have struggled to score touchdowns. San Francisco is currently in the middle of the pack in redzone touchdown percentage.

With Jimmy Garoppolo under center the 49ers have averaged 30 points per game against NFC West opponents but only 19.8 against all other opponents.

San Francisco has been successful against former Shanahan colleagues with Jimmy Garoppolo at quarterback. In thirteen starts against Sean McVay and Matt LaFleuer, Garoppolo has led the 49ers to an 11-2 record.

The 49ers rushing attack has been inconsistent, averaging only 4.4 yards per attempt in 2022.

Elijah Mitchell went down with an MCL strain early in the second half against New Orleans and will be out for up to eight weeks.

Davis-Price has only a pair of carries since week two and has been inactive since week seven. A physical runner, Davis-Price gives the 49ers a back capable of picking up tough yards inside.

Jordan Mason finally had an extened opportunity in the fourth quarter against New Orleans. With Mitchell out and McCaffrey nursing a sore knee, Mason stepped in with four strong carries to help close out the game.

With good vision and the ability to cut and accelerate through the hole, Mason is a prototypical Shanahan running back.

Whoever lines up in the backfield will need the offensive line to improve.

One of the main reasons San Francisco has struggled to get touchdowns in the deep redzone has been the inability of the offensive line to move people at the line of scrimmage. This explains why they are better running a zone scheme. Zone runs get defenders moving and the offensive linemen are able to use that movement to their advantage.

3.) Can the 49ers defense take away the middle of the field?

San Francisco’s ability to take away the intermediate middle of the field will be crucial to stopping the Dolphins passing attack.

Tua Tagovailoa is having a career renaissance under the tutelage of Mike McDaniel.

A big portion of Tagovailoa’s success in 2022 has been his ability to hit throws in the middle of the field. Hitting receivers such as Tyreek Hill and Jaylen Waddle in stride leads to explosive plays.

“They have so much speed that they blow the top off stuff, which gets some people open underneath,” said Kyle Shanahan on Wednesday. “Tua, to me, is the reason that they’re leading the league in explosives because he knows how to hit people over the middle. It’s rarely deep. It’s usually running and hitting these guys on the move and there’s some really open space with all that speed and then the quarterback who can drop it over linebackers, who is not worried about safeties and is doing that part of his game as high as anyone I’ve seen right now.”

Tagovailoa has completed 38 passes in the middle third of the field at a depth of 10-19 yards. According to NFL Next Gen Stats, this is 16 more than any other quarterback.

The Niner defense is uniquely prepared for this challenge. Afterall, they face an offense every day in practice that attacks the middle and have one of the linebackers in the NFL.

Since adding Fred Warner in 2018 no team has been better taking away throws in the intermediate middle area of the field. Over this time San Francisco has allowed only 71 completions in this area, 15 fewer than any other defense.

4.) Will San Francisco’s defense be able to take away their former teammates?

The 49ers run defense has allowed only 3.3 yards per carry this season, best in the NFL, and may see the return of Arik Armstead on Sunday.

Since adding Jeff Wilson Jr. through a trade with the 49ers the Dolphins rushing attack has averaged only 4.0 yards per rushing attempt.

As they did during their time in red and gold, Wilson and Raheem Mostert don’t generate consistent yardage. Instead, much of their damage comes when they are able to gash opponents with a long run.

Miami may be without both starting tackles on Sunday. Austin Jackson has already been ruled out and Terron Armstead is listed as doubtful.

Prior to this season, Mike McDaniel had spent his entire career in the NFL working with Kyle Shanahan.

McDaniel took what he learned, added his unique style, and has the Dolphins among the top teams in the league.

This article has 14 Comments