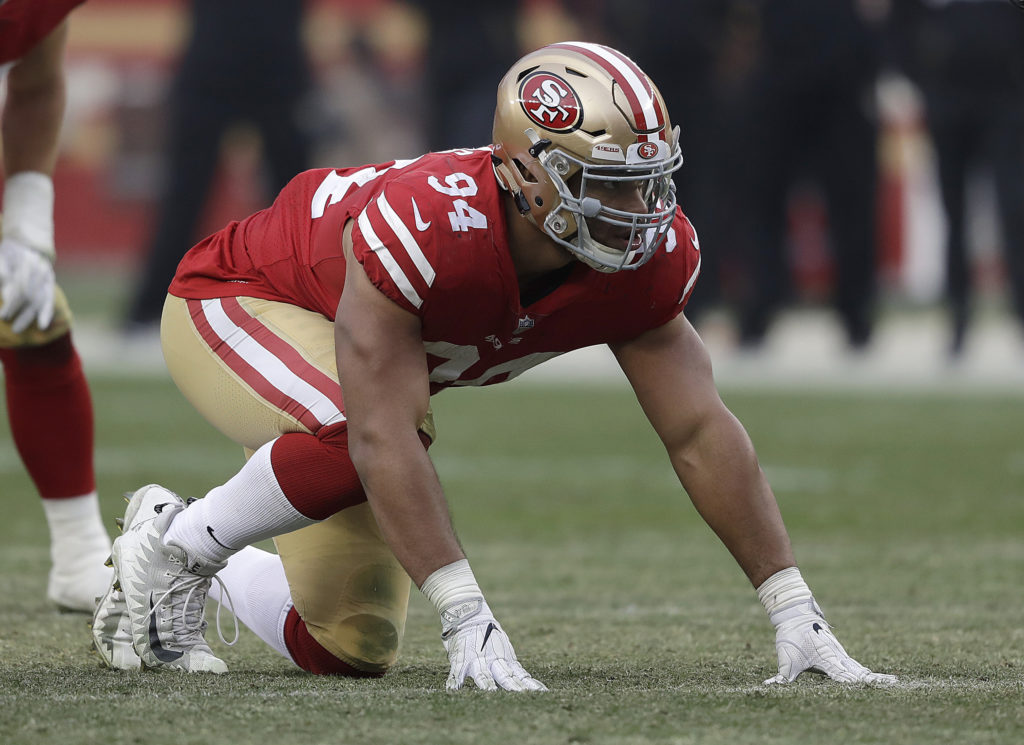 The 49ers have ways of getting into Round 2 or 3. They could, for example, trade a veteran player like Solomon Thomas. (Photo: Marcio Jose Sanchez/Associated Press)

NFL teams will barrel through Rounds 2 and 3 of the draft tonight. If the commissioner had prohibited trades over these three quarantined days, Kyle Shanahan could play video games with his kids this evening, and John Lynch could do 4,000 push-ups in his home gym.

The 49ers currently have no picks in the second round, and no picks in the third round, as you know. (They also have none in the fourth, but that’s a story for tomorrow.) The head coach and the general manager put themselves in this position through previous trades, and both have been emphatic that they don’t regret the decisions. They shouldn’t. Dee Ford and Emmanuel Sanders, the bounty from those mid-round picks, helped them reach the Super Bowl.

Just the same, you can be 100-percent sure that Shanalynch are in a wretched state of FOMO right now: fear of missing out on an exciting night of roster building.

Can the 49ers find a way to get into the second or third round? Here are some options.

There has been talk all week (and before) about the 49ers’ shipping out one of their many running backs, or (spurred by a Michael Lombardi report Monday) perhaps a defensive player. But realistically, how many of those guys could net a No. 2 or No. 3? Remember, veteran players, with some wear on the tires and many deep into their contracts, tend to be undervalued in draft-day trades.

Could the 49ers get a No. 3 for Matt Breida. I don’t think so. Tevin Coleman? Maaayyybe? Would the Patriots want Coleman? They have two compensatory picks (which now can be traded) at the bottom of the third round, and Bill Belichick has dealt with Shanalynch before.

What about on defense? Seems like the 49ers could easily get a third-rounder for Kwon Alexander, maybe even a second, but I don’t believe they’ll let him go. How about Jaquiski Tartt? Would someone deal a No. 3 for him? And could the Niners afford to let him go when they’re thin in the secondary?

Yes, the 49ers felt strongly enough about shoring up their D-line to use the No. 14 overall on defensive tackle Javon Kinlaw. Trading Thomas would undermine that approach to some extent. But Kinlaw has a chance to be an outstanding NFL player. I think it’s safe to say by now that Thomas is a solid rotational contributor, and will probably never be more than that.

But Thomas probably has trade value. He’ll be 25 when the regular season starts. He is versatile, and he’s an asset to any locker room. Also, though it has never made much sense to me, draft position tends to follow a player around through his career. The 49ers thought Thomas was a top-three talent in 2017. That is likely to influence how some teams view him now.

Solomon Thomas for a high third-round pick, who says no?

OPTION 2: PACKAGE LOWER PICKS FOR A HIGHER ONE

The 49ers have the 11th pick in the fifth round and the 31st pick in the sixth. My handy NFL trade evaluator is broken, so I’ll guess at what those two selections are worth. I think it would get them into the middle of the fourth round, and not much higher. That would end the Niners’ drought a little sooner, but it would still leave them out of Day 2.

Bad teams get into cycle of constantly mortgaging the future to plug immediate gaps. Good teams (think New England) are there to scoop up the future picks, which almost always seems like a good day when the next year rolls around. The 49ers have been building the right way. I don’t think either Lynch or Shanahan would be thrilled to start a bad trend.

That said, the Niners are in a peculiar predicament this year, with so little draft capital after the first round. They would have to at least consider, say, swapping a 2021 second-rounder (a low second-rounder, they’d like to think) for a 2020 third-rounder, especially if this year’s selection was near the top of Round 2.

The most likely scenario is the least fun to talk about, because it’s more convoluted. If the 49ers are able to reappear in Round 2 or Round 3 this year, it may well be due to a combination of the first three options.

Maybe they trade Nick Mullens and their fifth-rounder to get into the third. Perhaps they deal Tartt and a 2021 fourth-rounder to get into Round 2 tonight. These are the type of transactions that take a lot of internal discussion, a lot of creativity and a lot of confidence. Also, a willing trade partner. Often, they’re the trades that add up to define a regime. We’ll see if Shanalynch is able to put something together that makes sense.

Tonight would definitely be a lot more fun if the 49ers were, at some point, on the clock.

This article has 100 Comments