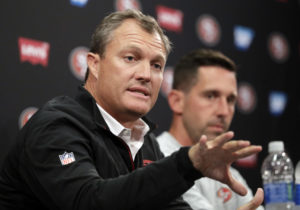 Monday afternoon John Lynch and Kyle Shanahan met the media for the first time since signing new contract extensions. It was a typical presser in the new normal. Which is to say everyone appeared  on computer screens and reporters could ask questions if they remembered to unmute their microphone.

Lynch and Shanahan were upbeat and optimistic in the time-honored way of every football coach and GM at the start of the season. It was, Shanahan said, the first time they’d seen some of the players since the Super Bowl.

And a lot has happened since then.

We all had questions about the 49ers after that Super Bowl loss, but no one suspected that when we sat down with Shanahan and Lynch this time of year, we’d be talking about a global pandemic.

Shanahan admitted to some concern about how health protocols were going to work. But he said now that he is on the 49ers campus, and has seen how the social spacing and protective measures are set up, “I feel better and better about this each day. I get how this can work.”

Because there are so many ways for this to go wrong.

To begin with, we’ve seen other sports leagues re-opening their schedules. And in virtually every case — baseball, men’s and women’s soccer, WNBA — players have tested positive for the virus. Major League Baseball is currently hoping that outbreaks among the Florida Marlins and the Cardinals will not be so serious that the season has to be cancelled.

At this point it seems pretty clear that playing in a “bubble” is the way to go. The NBA, WNBA and men’s and women’s soccer have announced no positive tests since they went into isolation, but each had several positive tests before they were “em-bubbled.”

The bad news is football is not played in a bubble.

“Once we play the game,” Shanahan said. “Social distancing is basically impossible.”

We will have to assume there will be some outbreaks on the 49ers and other NFL teams. Richie James has already been on, and then off, the COVID list. And if we have learned anything from baseball, it is that one player or staffer can quickly infect others. It wouldn’t take much to knock out a chunk of a roster.

So what do they do if they get a positive test from someone during games or scrimmages? Quarantine him and everyone he bumped into on the field? Quarantine the whole team? Or just isolate the individual player and roll the dice?

We all knew football was going to have the toughest time starting its season. Once games begin, players will literally be right in each other’s faces, spraying (possibly infected) tiny droplets into the air. There will be sweat, and probably blood. And the players are very large men, some well over 300 pounds, which is a red flag for COVID.

If Shanahan said it once, he said it five times, “This is all new to us.” He talked about how he usually comes to camp in the first few weeks, with a plan in place and a confident reply to any question. Now, he said, “I don’t know when I’ve said ‘I don’t know’ so many times.”

The other thing that the pandemic has done is shorten the run up to the first game, which is Sept. 13. The team is doing strength and conditioning now, but won’t actually hit the field in full gear for another two weeks. That first game is going to be on them in a hurry.

“We are only going to have 15 practices before Week One,” Shanahan said. “We are allowed 14 days in full pads, but I’m not sure we can get them all in.”

And once you begin practicing, how do you do it? Preseason games have been cancelled. That was the right call, but it doesn’t make it easier on the coaching staff when evaluating players.

“How do you set up a camp without a pre-season game?” Shanahan asked. “There could be times when we do tackling (during practice.) I’ve never done it before because bringing guys to the ground is where guys get hurt. But we may.”

Once the games begin, football is hoping to avoid what is happening to baseball, with outbreaks popping up, cancelling games and putting players in isolation. Cleveland’s Odell Beckham Jr. said at one point he didn’t think the NFL should even start the season. (He’s softened that stance, but if things go south, other players are likely to support the idea.)

Still, it is the start of the football season. Every team is tied for first and right now a player is telling someone, somewhere, that he’s in the best shape of his life. And Shanahan, hired in 2017, said his family was celebrating his new, six-year extension to the year 2025. Not that it is about the money.

As the son of an NFL coach, Mike Shanahan, Kyle said, “I had never lived anywhere in my life more than four years. So to pass the four-year mark was pretty exciting in the Shanahan house.”

This article has 214 Comments