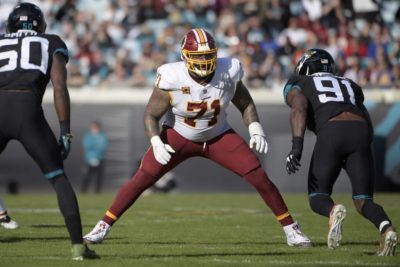 New acquisition Trent Williams  has been terrific so far for the 49ers. (Phelan M. Ebenhack/AP)

(Editor’s note — Now that the season has begun (barring any last-second problems) we’re going to make a change in the blog. Starting next week it will appear the day after every game. It will give us a chance to highlight some overlooked moments, strategize and yes, creatively second-guess everyone. And that’s every game, whether Sunday, Monday or Thursday. Now back to your regular programing.)

I predict another championship season for the 49ers. Certainly well into the playoffs and maybe back to the Super Bowl. It would not be a surprise.

Not that you care, but front-running with the home team is not usually my style. Now, when I started at the Chronicle, back in the dark ages, we had a veteran sports columnist named Art Rosenbaum. Nice guy, but he shamelessly played the hometown angle. He picked the A’s and Giants to win the World Series every year, on the chance that he could luxuriate in the “I told you so’s,” if it happened.

Nope, this is just gut feeling. I think this will be another big year for the 49ers.

Not that I don’t have reasons. For instance:

To say this was an unusual off-season is to understate. There were no off-season camps. No visits to interview top draft choices. And no pre-season games.

I’m going to go out on a limb and say this would be the absolute worst time in NFL history to bring in a new coaching staff that wants to completely rebuild a team. There just aren’t enough hours in the day, no matter how productive you say your Zoom meetings are.

Far better to be an established team, with the same coaching staff and a recent history of success. With 18-22 starters from the Super Bowl back, per the Chronicle, the 49ers are the definition of an established roster. And additions, like Trent Williams, are living up to expectations.

That’s the issue, isn’t it? If nothing else, this season will provide lots of firewood for what-is-the-point-of-preseason crowd. It’s a debate held every year. Before Coronavirus canceled everything, The NFL had agreed to cut the pre-season from four games to two.

So you’d have to think cutting the pre-season out altogether has been at least discussed. And now, this year, we can see what that’s like.

The obvious problem is that as we go through the annual Ahkello-Witherspoon-is-looking-much-better-at-DB drama, it would be nice to see him on the field, against another team, in game conditions.

Or maybe we will find that the only loss when you don’t have exhibition games are the really unfortunate pre-season injuries. We will see. You’d have to say that the shortened training camp is seeing a large number of injuries so it may balance out this year.

Also, I think the new version of the practice squad is going to help the 49ers. This isn’t the old “taxi squad” for marginal rookies and free agents with a little potential. It is 16 players, with six slots for players “with any amount of experience.” And, each week two players can be put on the active roster. And then they can return to the practice squad without going through waivers.

Suddenly, the practice squad is a much more attractive place — kind of like being in a baseball bullpen. And we have the proof of that right in front of us. Asked earlier if he’d accept a practice squad role, veteran safety Johnathon Cyprien said, “No.” But coach Kyle Shanahan pitched him on the likely chance that he’d be on the field during the season.

And on Monday, the 49ers announced that Cyprien was one of the 16-man practice team roster.

Also, I think the organization has established itself as not only a winner, but a supportive franchise. The top players have bought in to the Shanahan culture. (And don’t think the support for Colin Kaepernick’s kneeling went unnoticed.) William said he saw it right away, when walk-throughs were more like “run-throughs” compared to his unhappy days at the Washington Football Team.

So I think they will get a shot at a lot of those fringe vets that could have their pick of teams.

And finally, team owner Jed York was mocked when he said during the Jim Harbaugh days that the 49ers “don’t raise division championship banners. We raise Super Bowl banners.” That quote didn’t age well as the team spent some time wandering in the wilderness.

But now with Shanahan and John Lynch, they’re back in the hunt, and even the new players know the score.

“The front office expects not just good out of us, they expect great,” Nick Bosa said early in the year. “When you invest a lot in the D-line room, you expect to get a return on it.”

So for those reasons: veteran lineup in an unsettled time, winning record and culture and a team that went to the last Super Bowl, it says here the 49ers are going to have a big year.

Of course, one tweak to Jimmy Garoppolo’s knee and the whole thing collapses. Say three Hail Mary’s that doesn’t happen. But let’s look on the bright side in this dark time.

This could be a great year for the 49ers. Tell Art Rosenbaum I said so.

This article has 419 Comments