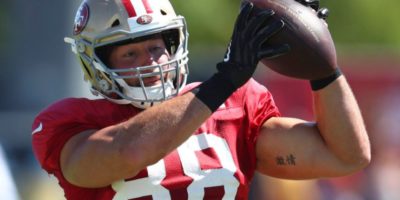 Here are my top 10 ex-49ers to coax off the coach and onto the field. Is Jerry Rice too old?

SANTA CLARA This is the transcript of Blaine Gabbert’s Wednesday press conference, courtesy of the 49ers’ P.R. department. What did you do over the bye week? “I actually got a chance to go back to St. Louis. Hang out with the family a little bit. I got to see my little brother’s state semi-final game, so that was pretty fun.”   How did he do? “He’s a freshman so he’s…

This is the transcript of Colin Kaepernick’s Tuesday press conference, courtesy of the 49ers’ P.R. department. How do you feel about this opportunity this week to face a division team at home and get back 1-1 in the division standings? “Yeah, it’s a huge opportunity for us. Like you said, to get back to 1-1 in our division, to give us an opportunity to get to 3-4 overall and start…

SANTA CLARA — This is the transcript of offensive coordinator Geep Chryst’s Friday press conference, courtesy of the 49ers’ P.R. department. Opening comments: “It’s great to be here. Week 1 of the regular season, there’s a lot of juice throughout the league and in our locker room. But, can’t wait to play Monday night. That’s about all I have to say, but I know you probably have some questions.”  …

This is my Saturday column. The 49ers’ preseason game Saturday against the Denver Broncos almost matters. It’s the third preseason game, the dress rehearsal. Both teams’ starters probably will play the entire first half so they can get in rhythm and feel confident for the regular season. Here are the top-three things to watch about the 49ers. 1. The first-string offense Twelve teams have yet to score a touchdown with…

SANTA CLARA – Here are the highlights from Tuesday’s practice. THE GOOD 1. RB Kendall Hunter. Led all members of the first-team offense with five touches during team drills (Carlos Hyde and Anquan Boldin each had three touches – tied for second-most on the first team). One of Hunter’s touches was a catch on a screen play, and another was an eight-yard touchdown run on a stretch-zone run to the…

SANTA CLARA – Here are the highlights of the 49ers’ eighth padded practice of training camp. THE GOOD 1. RB Reggie Bush. Didn’t play during Saturday’s preseason game against the Texans, and may not play at all during the preseason – the coaches seem to want to keep him healthy. But, from the looks of practice, Bush will play a lot during the regular season. Today he had a team-leading…

SANTA CLARA – Here are the highlights of the 49ers’ sixth padded practice of training camp. THE GOOD 1. WR Torrey Smith. Faced Niners’ No. 1 cornerback Tramaine Brock three times during one-on-one drills in the red zone, and beat him all three times. First Smith beat Brock with a fade route to the back pylon. Next Smith beat Brock with a double move – first in, then out. Finally…

SANTA CLARA – The 49ers practiced in shorts and shells Saturday afternoon. Here are the highlights. THE GOOD 1. WR Torrey Smith. Seemed to jam his right ring finger catching a pass from Colin Kaepernick during warmups. Smith was in visible pain for a few minutes as he shook his hand and held his finger. But apparently the injury wasn’t a serious. A few minutes later during one-on-one drills Smith…

SANTA CLARA – Wide receiver Torrey Smith spoke in the 49ers’ auditorium Saturday morning. Here are selected quotes. Q: How is the offense coming along? SMITH: I think it’s always going to be a work in progress. I think we’re going in the right direction, fixing the mistakes. That’s what the first week of camp is about, really camp in general. We’re doing a great job learning from mistakes, and…

SANTA CLARA – Here are the highlights from the 49ers’ first practice of training camp, which took place at Levi’s Stadium. THE GOOD 1. WR Torrey Smith. Made the catch of the day – a one-handed catch near the sideline. Quarterback Colin Kaepernick lofted the pass over cornerback Shareece Wright’s head, and Smith reached out and caught the pass like Kevin Mitchell in 1989. 2. WR DeAndrew White. Caught two…

SANTA CLARA – Here are selected quotes from Anquan Boldin’s Friday morning press conference in the 49ers’ auditorium. Q: What gives you confidence that you guys can achieve what you set out to achieve last year and the year before? BOLDIN: We still have a lot of talent in this locker room. That hasn’t changed. The thing I’m excited about is all of the young guys who had to play…

This is my Sunday column. Remember dead week in college before finals? This is dead six weeks for the San Francisco 49ers. They have the next month and a half off to prepare for the exam that will make or break their 2015 season. What questions will be on that test when the Niners arrive for training camp? In ascending order of importance, here are the top five questions the…

SANTA CLARA— Trent Baalke answered a few reporters’ questions in the 49ers’ media room Wednesday afternoon. Here’s a transcript of the interview. BARROWS: Has Justin Smith decided whether he will retire? BAALKE: As I said at the end of the season, I think at this stage of his career, he has earned the right to make that decision when it’s right. I think he’s still sorting through that process. He’s…

The 49ers have signed 26-year-old wide receiver Torrey Smith to a five-year, $40 million contract with $22 million guaranteed, according to Adam Schefter. Smith is the perfect complement to Anquan Boldin. Boldin is the Flanker — the possession receiver who finds the the open window against zone coverage. Smith is the split end — the sprinter who blows past man coverage and outruns the cornerback down the sideline. When the…

The 49ers are the favorites to sign 26-year-old wide receiver Torrey Smith, according to the Baltimore Sun. One source tells the Sun it’s a “done deal” that Smith will sign with San Francisco. Smith would be a terrific signing. The 49ers need a deep threat, and Smith certainly is a deep threat. He is averaging 16.9 yards per catch in his four-season career. If the Niners sign Torrey Smith, they…

By BOB PADECKY Torrey Smith, the Ravens’ wide receiver, was singing the praises today about his quarterback. I brought him to a screeching halt with a question. “If the Ravens win the Super Bowl, will the criticism of Joe Flacco finally stop?” “No,” Smith said. “I don’t think it’ll ever stop. I mean, look at Eli Manning. He’s won two Super Bowls and he still gets it. If Eli can…

SANTA CLARA – Justin Smith spoke at his locker Wednesday afternoon. Here’s what he said. Q: Are you excited about the HarBowl? JUSTIN SMITH: No, not really. I don’t even know John Harbaugh. Just from playing against him, he’s on the other sideline. But that’s for them. They’re probably focused on it, it’s an awesome deal for their family but, you know, we’re concentrating here on bringing home a championship….

Greg Cosell spoke on KNBR on Monday and Tuesday. Here’s what he said about the 49ers’ Super Bowl matchup against the Ravens. Q: How much more difficult will it be for the 49ers’ offense to do what they want to do against the Ravens’ defense? COSELL: Ray Lewis is going to struggle against this offense, because they’re going to make him have to run. I don’t think he’s at the…