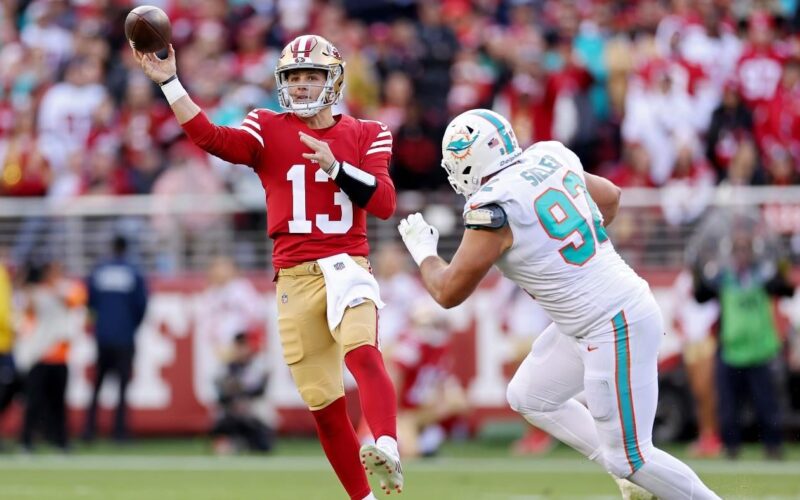 The 49ers best chance to make a Super Bowl run this season was for Jimmy Garoppolo to stay healthy, but he’s now out for the season.

Nick Bosa is the best player on the best defense in the NFL. Despite missing a game and a half due to injury, Bosa leads the NFL in sacks (14.5), and quarterback hits (34). He is also tied for second in tackles for loss (15).

Bosa has started 11 of San Francisco’s 12 games this season and the Niners defense has held its opponent to 19 points or less in ten of those games.

The addition of McCaffrey prior to the trade deadline changed the 49ers offense. For the first time since Kyle Shanahan took over in 2017 the Niners have a running back who is a true factor in the passing game. McCaffrey provides a safety blanket for quarterbacks with his ability to turn short dump offs into first downs.

In five starts since joining San Francisco McCaffrey has averaged 105 total yards per game while managing to pick up 31 first downs and four touchdowns.

Joining McCaffrey as a dual threat option is Deebo Samuel. The duo is two of only three players with 50 or more receptions, 500 or more receiving yards and 200 or more rushing yards this season.

The 49ers raised some eyebrows when they announced the hire of Brian Griese as their choice to replace Rich Scangarello as the quarterbacks coach.

Despite being an NFL quarterback, Griese had never coached at any level was working as a broadcaster for ESPN since 2009.

The addition of Griese to the staff has done wonders.

Prior to this season, Jimmy Garoppolo had never gone more than two consecutive games without throwing an interception. Prior to his most recent injury, Garoppolo was turnover free four weeks running. The veteran quarterback was even throwing passes away, something he almost never did in previous years.

The seventh-round rookie quarterback shrugged off a rough start to complete 68 percent of his passes and throw a pair of touchdowns to defeat Miami in his first extended NFL action.

With Purdy at quarterback the 49ers would become the first team in NFL history to make the Super Bowl with a rookie under center.

If San Francisco is to make history, Purdy will need to make smart decisions with the football, get the ball into the hands of his playmakers and make a play or two himself in the postseason. Something that has been missed during the 49ers last two postseason runs.