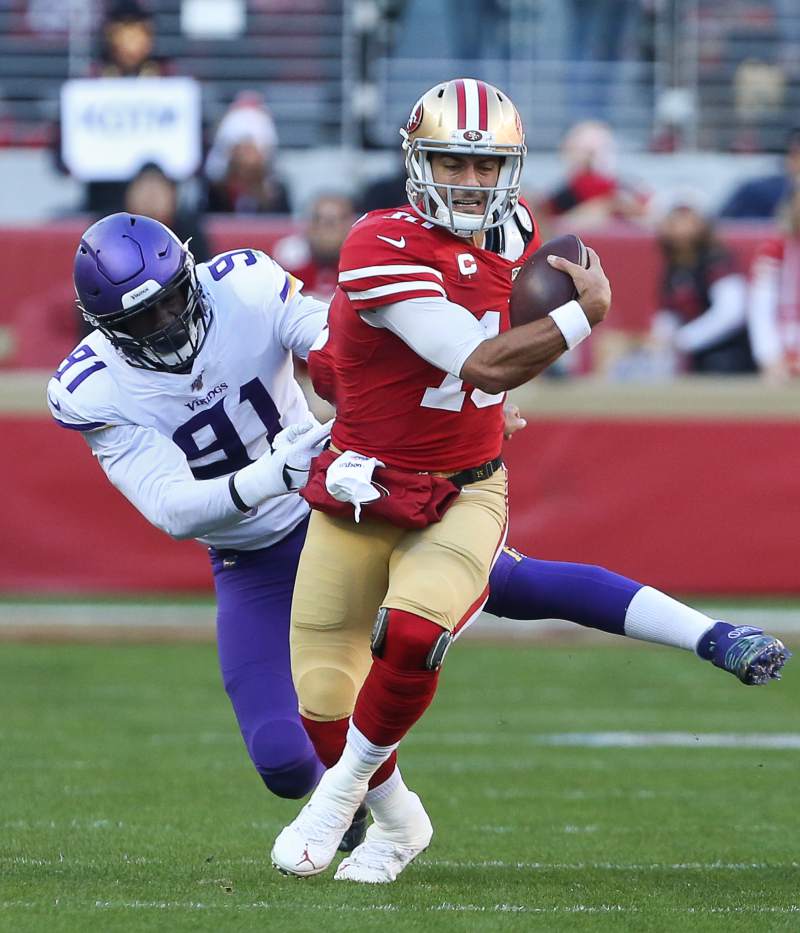 If the 49ers were to draft a quarterback with the 13th pick in the upcoming draft, would your head explode?

The 49ers have given no indication what they plan to do with the 13th pick. Draft experts have argued the 49ers could take a wide receiver or a cornerback or an offensive tackle or a defensive tackle.

Is it possible the 49ers’ target is a quarterback? Could they make such a controversial move?

Jimmy Garoppolo’s record as an NFL starting quarterback is 21-5. He has been terrific for the 49ers, who desperately needed a good quarterback before he arrived in a trade. He even went to the Super Bowl during his first full season as a starter.

But Garoppolo lost the Super Bowl, and was one of the main reasons the 49ers lost. He did so much harm to his own team during the fourth quarter — in just 15 minutes he overshadowed most of the good he had accomplished in his entire brief career.

What’s more, Kyle Shanahan doesn’t seem sold on Garoppolo. These tea leaves are pretty easy to read. After Garoppolo threw one interception during the 49ers’ divisional playoff win over the Vikings, Shanahan let Garoppolo throw just 12 passes over the next six quarters. So Garoppolo didn’t really take the 49ers to the Super Bowl. The 49ers took Garoppolo.

In the Super Bowl, Shanahan didn’t let Garoppolo run a two-minute drill at the end of the first half. Instead, Shanahan ran down the clock. He didn’t trust Garoppolo. Treated him like a beginner. And at the end of the game, when the 49ers were losing and needed Garoppolo to play like a franchise quarterback and hit a deep pass down the middle to Emmanuel Sanders, who was open, Garoppolo overthrew the pass by five yards.

He’s the main reason the 49ers currently have so little cap space and needed to trade their best defensive player, DeForest Buckner, for a first-round pick.

But the 49ers aren’t married to Garoppolo. In 2021, they can trade or release him and pay just a $2.8 million salary-cap penalty. They’ve kept their options open, just in case. Could “just in case” happen?

If the 49ers truly were sold on Garoppolo, they would extend his contract right now and restructure it to create tons of cap room. But doing so would commit the 49ers to Garoppolo for the long term, because trading him or releasing him would become much more expensive and complicated.

The 49ers don’t want to extend or restructure Garoppolo’s contract. General manager John Lynch said so. “I think we’re in a good spot right now, and we’ll probably hang tight,” Lynch said in February. Meaning the 49ers would rather maintain the option to walk away from Garoppolo next year, even if committing to him would make him more affordable.

After Lynch spoke, we began to see why the 49ers want to keep their quarterback options open.

On March 4, Tom Curran of NBC Sports Boston reported that “multiple sources” told him Shanahan has “some reservations about Garoppolo’s ceiling and overall decision-making.”

On March 9, Albert Breer of SI.com reported “there’s been perception in league circles that Garoppolo is on the clock because Kirk Cousins is a free agent in 2021.”

Translation: people around the league thought Shanahan wanted to ditch Garoppolo for Cousins.

But on March 16, Cousins signed a two-year extension with the Vikings. Apparently, Cousins didn’t want to ditch the Vikings for Shanahan.

Six hours later, the 49ers traded Buckner to the Colts for the 13th pick.

If the reports are true that Shanahan would like to find an upgrade at quarterback, then he must consider drafting one with the 13th pick. Because if he doesn’t, he might never find a significant upgrade over Garoppolo.

The 49ers have an excellent roster. They probably won’t own another top-15 selection for a few years, because they probably will be a perennial playoff team that picks near the end of Round 1. If one of the top quarterbacks in the upcoming draft falls to pick No. 13, there might be a chance the 49ers will take him.

The most likely quarterback they would draft is Utah State’s Jordan Love. He’s bigger, faster and has a stronger arm than Garoppolo — some draft experts compare Love to Patrick Mahomes. In 2018, Love won 11 games and threw 32 touchdown passes and just six interceptions. Had he been eligible to enter the draft after 2018, he probably would have been a top-five pick.

But he wasn’t eligible, so he returned to Utah State, which then lost its head coach, offensive coordinator, top four wide receivers, best running back and three of five starting offensive linemen. So the team tanked in 2019, as did Love’s numbers. And now he probably will be available at pick No. 13.

The 49ers have the excellent coaching and the talented roster to bring out the best of Love, the Love from 2018. The Love who can run around and make any throw. The Love who can make the 49ers’ offense much more dangerous and difficult to stop.

If they draft him, he could sit on the bench and learn for a year, just as Mahomes sat and learned from Alex Smith in Kansas City.

Then in 2021, the 49ers could trade Garoppolo back to the Patriots and hand the starting job to Love, who would be much younger and cheaper. Or, if Garoppolo wins the Super Bowl next season with the 49ers, they could keep him and trade Love instead. Either way, the 49ers would have options and valuable assets.

Keep in mind, Joe Montana was just 30 when the 49ers traded for Steve Young. Garoppolo will turn 29 in November. It’s not too soon to plan for the future.

This article has 270 Comments