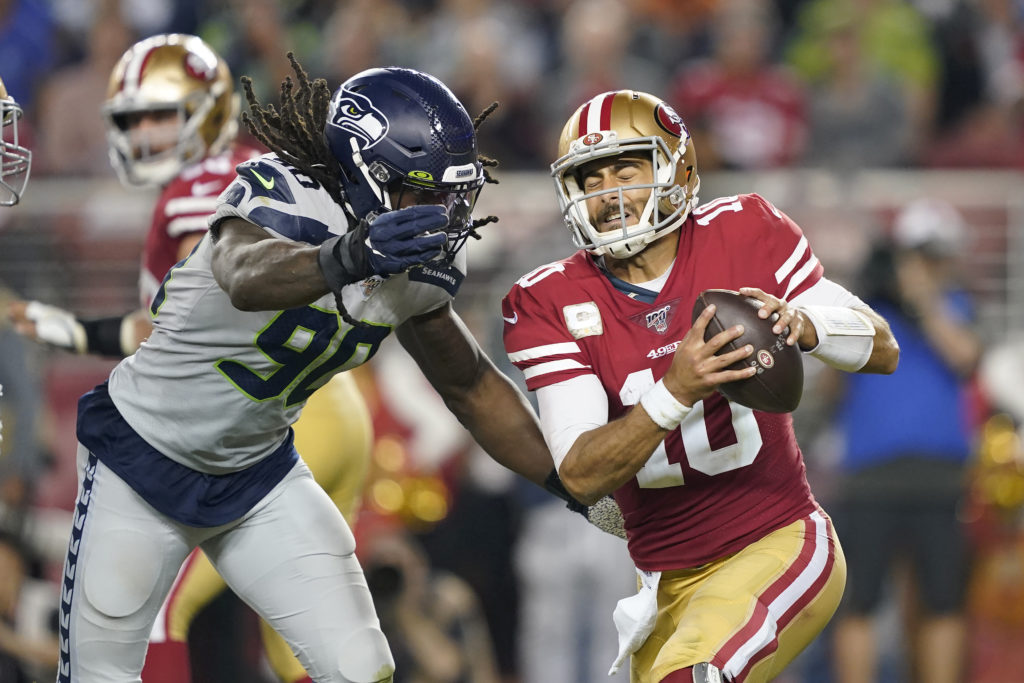 Jimmie Garopollo always seems to be under pressure, on the field and off. (AP photo/Tony Avelar

Whoops. Just got a calendar alert. As you know, we are contractually obligated to write about Jimmie Garoppolo at regular intervals, and this was a reminder that it is time for another check in.

Luckily, a great deal of pick and shovel work has already been done. Last week, writing in The Athletic, analyst David Lombardi did a deep dive into all things Jimmie.

I recommend it. It is comprehensive, thoughtful, and frankly way over my head. I know I should be interested in Garoppolo’s AY/A (adjusted yards per attempt) compared to his CPAE (completion percentage above expectation.) I simply lack the football brainpower to appreciate that kind of data.

However, there are some neat little nuggets that are worth considering. For starters, much of it supports the view here, which is that Jimmie G is perfectly fine and has the potential to be better. We cite, once again, the stat from analyst Bucky Brooks, who pointed out that Garopollo was the only NFL QB to be in the top five in yards per attempt (8.4), passing touchdowns (27) and completion percentage (69.1).

Barring something unforeseen, I think the 49ers have (and have paid) their franchise quarterback for years to come. Lombardi touts Garopollo’s 2019 season as “arguably the best full season by a 49ers QB since Jeff Garcia.”

So, Jimmie G haters, we start there.

Which is not to say that there aren’t some rough edges. One stat that jumps out is that Garoppolo fumbled ten times last season. That’s way too many. And we will discuss the pass rush in a bit, but rushed or not, the QB has to protect the pumpkin. Definitely a place for improvement.

However, Garopollo is also praised for his hang-in-there ability. I was making fun of it earlier, but the stat for completion percentage above expectation is a good indicator of a quarterback who is containing his happy feet and getting the throw off under pressure. So it can be double-edged. He hangs in there to make a play but then leaves himself open to having the ball batted out of his grasp.

The story only briefly mentions Garoppolo’s most polarizing flaw — the what-was-he-looking-at interception. Again, poor passes are often a function of a pass rush. But hey, QB’s get rushed. That’s the job description. You have to be able to locate the window and make the throw. Thirteen interceptions last year and several balls that clanked off a defender’s hands. That can be improved.

We’re hearing some hopeful talk about improved mobility, now that Garopollo is a year removed from ACL surgery. And that may happen. The general rule rough is that slow people don’t generally get faster. But we will see. Improved agility could be helpful and that can be trained.

Some Lombardi numbers confirm what you’ve probably already thought. Doesn’t it seem that Garoppolo makes most of his throws over the middle? Yep. NFL Next Gen Stats says 63 percent of his attempts were between the numbers. That’s fine, although it is worth saying that the chances of an interception, or a deflected pass that is intercepted, are higher there than along the sidelines.

But the throw-over-the-middle reliance is significant in another way. It means that the pass rush up the middle has to be contained. As legendary NFL general manager Bill Polian said recently on the “Move the Sticks” podcast, “quarterbacks don’t like having people at their feet.” That, he opined, was why an interior pass rush might be even more effective than edge rushers.

The interior rush affects Garoppolo in two ways. First, they are in his face, or at his feet, throwing off the timing of the play or even sacking him for a loss. And second — think Chris Jones batting down that fourth-quarter pass in the Super Bowl — an interior rush shuts down throwing lanes.

And on top of that, Lombardi points out that center Weston Richburg was injured and lost for the season and guard Mike Person struggled with a neck injury all year. (He has since retired.)

So the middle of the field, where Garoppolo makes his living, was compromised by a less than healthy offensive line. And that leads to another stat that raised some eyebrows on this side of the keyboard. Garopollo was sacked 36 times last year. Only 13 quarterbacks had more. And that’s just the regular season. Counting the playoffs, the number was 40.

That’s a lot. Remember in 2016 when Raiders’ quarterback Derek Carr was only sacked 16 times all year? Getting hit like that takes a toll. You can bet the 49ers hope for less of a toll when the season begins again.

All of which seem to paint a pretty fair picture of Garoppolo. He’s young and has been given the keys to the offense (also the bank account.) He’s a tough guy, willing to stand and deliver. But that can work against him if he waits too long and creates a fumble.

His reliance on passes over the middle is effective — 69 percent completion rate — but can also end up putting the ball in crowded places on the field, which rarely works out well over time. And a weakened offensive line played right into a worst-case scenario where pressure up the middle disrupted favorite routes.

That pretty much sums it up, with the addition of one stat from last year:  Garoppolo took the 49ers to the Super Bowl. Other than the 49ers and the Chiefs, in 2020, there are 30 NFL teams looking for the guy who can do that.

This article has 239 Comments