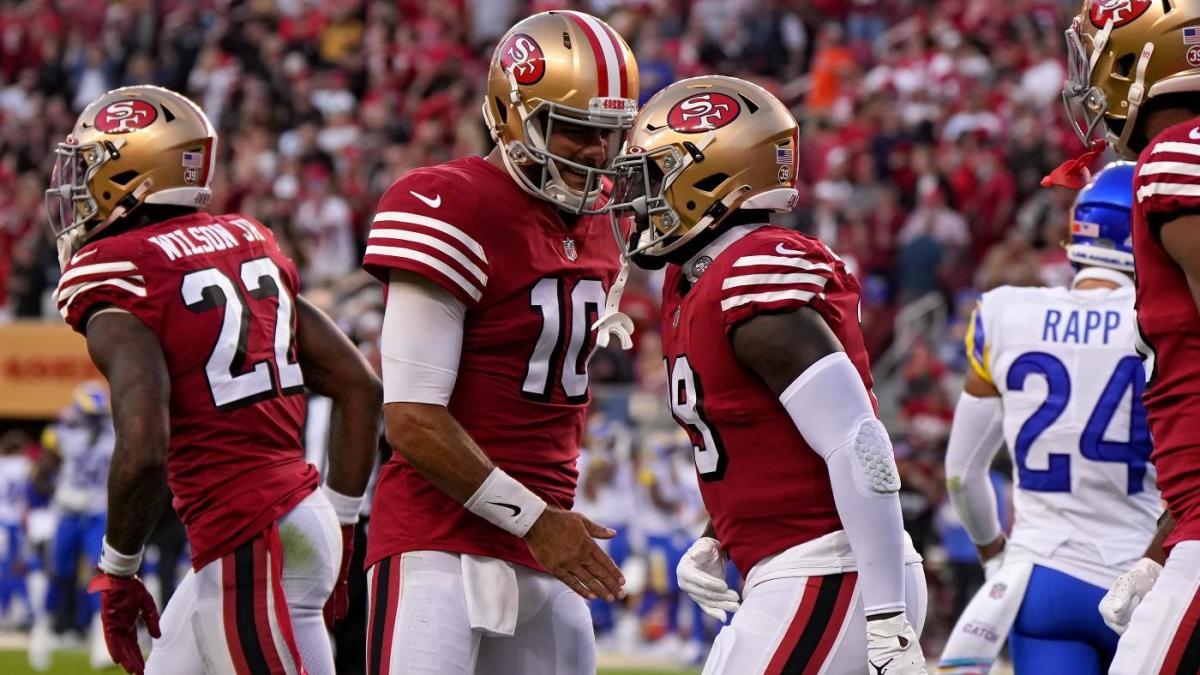 The 49ers reached the midpoint of their season. That coupled with the team having its bye this week makes it’s this a perfect time to reflect on the first half of the season. Here are their grades for the first half.

Trey Lance struggled in a season opening loss at Chicago. He missed a wide-open Tyler Kroft for a touchdown early in the game. In the second half he passed up a possible touchdown to Jauan Jennings, taking a sack instead. A torrential downpour made conditions nearly unplayable in shortly after he threw an interception.

In week two, Lance led the 49ers offense to a field goal on its opening possession against Seattle. On the ensuing possession he was lost for the season after suffering a broken ankle after keeping the ball on a zone-read.

With Lance out, Jimmy Garoppolo took over as the 49ers starting quarterback.

Despite missing all of training camp and preseason while recuperating from offseason surgery, the veteran quarterback had a solid performance off the bench.

His first start against Denver a week later wasn’t so smooth. In fact, it was Garoppolo’s worst performance of his career.

In a 31-14 win over Los Angeles last Sunday, Garoppolo became only the fourth quarterback in 49ers history to complete 84 percent of their passes in a game.

The 49ers running backs had mixed results throughout the first half.

Elijah Mitchell suffered an injury after only six carries in week one against Chicago.

Jeff Wilson Jr. stepped in as the starter and was solid. The former undrafted free agent was among the top ten in rushing yards through the first six weeks.

Wilson saw his carries be reduced after the team traded for Christian McCaffrey.

Deebo Samuel was the only other 49er to have more than 20 rushing attempts through much of the first half. The wide receiver had 24 carries for 138 yards before missing the Rams game with a hamstring injury.

Rookie Ty Davis-Price missed most of the first half with a high ankle injury. Fellow rookie Jordan Mason was limited to only one rush attempt despite looking explosive during the preseason.

Instead of using the rookies, Kyle Shanahan brought in Tevin Coleman. The veteran had a couple nice receptions against Carolina but managed only 2.2 yards per rushing attempt before being released. He has since re-signed to the practice squad.

Seeing the lack of productivity from the backfield, San Francisco swung for the fences when it sent four draft picks to Carolina in exchange for Christian McCaffrey.

McCaffrey has looked fantastic through his first two games in red and gold. Making his first start last Sunday in Los Angeles, the former Stanford Cardinal picked up 149 yards on 26 touches. McCaffrey became the first player since 2005 to record a passing, rushing, and receiving touchdown.

If he and Mitchell are healthy the rest of the way, the running back room will show massive growth in production over the second half of the year.

This grade would be higher, but the 49ers lead the NFL in percentage of dropped passes at eight percent.

Deebo Samuel leads the team with seven and Jauan Jennings isn’t far behind with five.

On the positive side, San Francisco leads the NFL in yards after the catch with an average of 6.9 per reception. Their 12 receiving touchdowns is just outside of the top ten as well.

Brandon Aiyuk has led the way with 38 receptions for 483 yards and four touchdowns.

Rookie Danny Gray has been a non-factor so far. He has been targeted only six times and has no receptions.

The 49ers tight ends get a slightly better grade than the wide receivers because other than Charlie Woerner they’ve been able to hold onto the ball.

George Kittle has continued to be among the best blocking tight ends in the league. In addition, he has seen his targets increase over the last three weeks of the first half. That increase has led to touchdown receptions in back-to-back weeks.

Charlie Woerner is a decent blocker, but he has stone hands. The third-year player was wide open for a pair of deep passes, both hit him in the hands before falling to the ground incomplete. Those are his only two targets on the season.

Ross Dwelley and Tyler Kroft have been much better, and their snaps have increased in recent weeks as a result. The two have been able to haul in five of the eight passes that have come their way. Dwelley had a touchdown reception against Seattle and a 56-yard grab which set up the final 49ers score last week against Los Angeles.

Heading into training camp and even into week one, there were a lot of questions about the 49ers offensive line.

Gone were Laken Tomlinson and Alex Mack while Daniel Brunskill was sidelined with an injury. Their replacements: Aaron Banks, Jake Brendel, and Spencer Burford had a total of three starts between them.

That inside trio along with Trent Williams and Mike McGlinchey have proven to be anything but a concern.

San Francisco’s quarterbacks have been pressured on only 16.4 percent of their drop backs this season, fourth lowest in the league.

This group has been solid in the run game as well. Although they are around the middle of the pack in yards per attempt, their average of 4.5 is a slight increase over last season.

In school a C- represents slightly below average, which is where the 49ers offense has been throughout the first half.

They are eleventh in yards, but yards don’t win games, points do and their average of 22 per game ranks 18th.

San Francisco’s points output being slightly below average in the first half stems from their lack of execution.

The 49ers offense is tied for the eighth most penalties and they are tenth in fumbles. These mistakes have led to only 34.5 percent of drives resulting in touchdowns, putting them in them in the bottom ten.

This article has 16 Comments