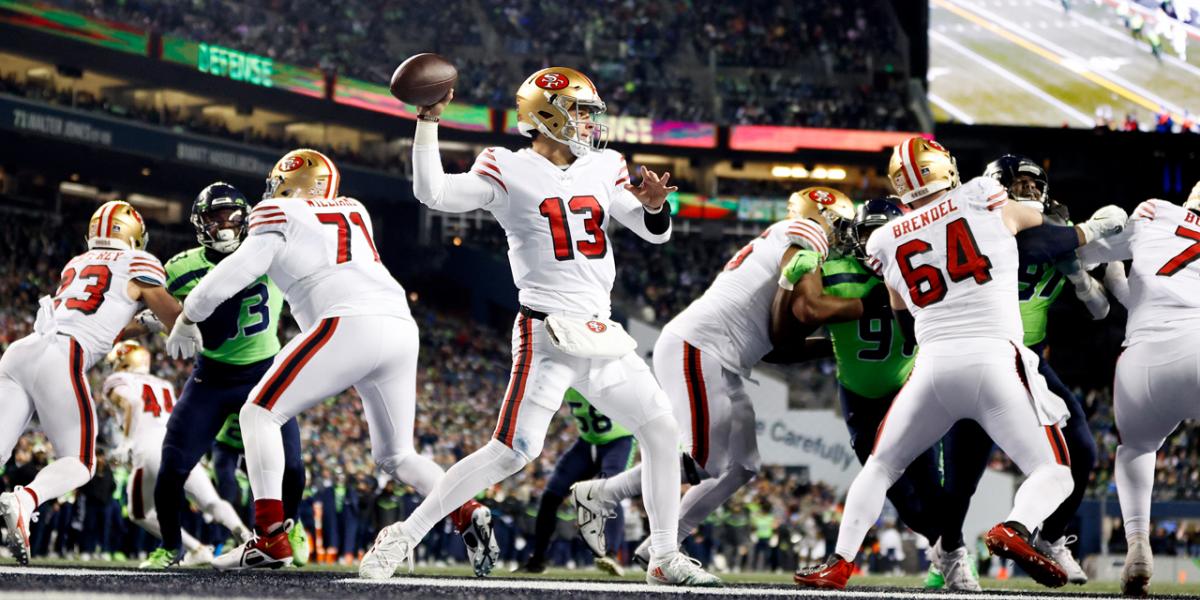 This is the live blog for the San Francisco 49ers (13-4) Wild Card playoff matchup with the Seattle Seahawks (9-8) from Levi’s Stadium in Santa Clara. I will provide updates and analysis throughout the game.

11:42 My five keys for the 49ers begin with Brock Purdy being ready for the moment.

With Davis-Price and Colemen inactive the 49ers will have just three running backs today. An interesting decision considering weather conditions that lend themselves to a more run heavy gameplan.

1:35 Great start for the 49ers defense. Kenneth Walker with a gain of nine on the first play, then Javon Kinlaw stuffs him for a loss of one and Arik Armstead finishes off the three and out with a sack of Geno Smith.

1:39 Deebo Samuel getting work from the backfield right away. The receiver takes a toss around the left side for 22-yards. Terrific blocking up front to open that up for him.

1:42 Brock Purdy looking shaky on the first possession. He’s been inaccurate, missing Deebo Samuel and Jauan Jennings before nearly throwing an interception on third and three.

1:48 Back-to-back three and outs for the 49ers defense to start the game. Tashaun Gipson drops Geno Smith on a third and two run around the left side. Deommodore Lenoir with tight coverage on D.K. Metcalf on second down, holding the receiver to a gain of just four.

1:54 Christian McCaffrey showing why he’s the 49ers best midseason trade acquisition since Fred Dean. McCaffrey rips around the left side for 68 yards on the first play of the possession, then takes a pass from Purdy into the endzone from three yards out.

In between the big plays from McCaffrey, Elijah Mitchell took a check down from Purdy for a gain of 18 to set up the offense at the Seahawks two.

2:00 Dre Greenlaw is down, he has been dealing with a back issue. He jogged off the field.

2:06 The first quarter comes to a close with Seattle driving. Smith has completed three of four passes and run for 11 yards on this possession.

Seattle is going after Deommodore Lenoir.

2:14 Seattle beat the 49ers up at the line of scrimmage on that possession, running the ball eight times for 38 yards and also allowing the 11 yard scramble by Smith. Kenneth Walker gets into the endzone with a run around the left side from seven yards out.

2:22 Purdy showing off his speed, climbing the pocket and taking off for 13-yards and a first down. He has everything the 49ers need for this offense.

2:27 San Francisco gets down to the Seattle 12. Protection breaks down and Purdy is sacked by Bruce Irvin for a loss of eight.

With Aaron Banks returning from injury the 49ers have gone back to rotating Spencer Burford and Daniel Brunskill at right guard.

2:34 Huge throw from Smith to D.K. Metcalf who got behind Charvarius Ward for a 49-yard touchdown to give Seattle a 14-13 lead.

2:38 Big play for the Seattle offense followed up by a quick three and out for their defense. A checkdown from Purdy for seven, McCaffrey run for no gain and Purdy tries to fit a slant in to Deebo Samuel and it is deflected by the Seattle linebacker.

2:44 The 49ers defense has been punched in the mouth and they are not responding well.

2:46 Seattle takes out Kenneth Walker and DeeJay Dallas is stopped for no gain on consecutive plays.

San Francisco will have an opportunity to take a lead into halftime. They take over at their own 23.

2:54 Purdy hits Brandon Aiyuk over the middle for 33 to open the possession. Follows that up a few plays later by hitting Samuel on a crosser for 18.

Around those two plays Purdy looked frenetic, bouncing out of the pocket to his left repeatedly.

Geno Smith takes off on a scramble and Ward hits the quarterback as he starts to slide. Instead of going into halftime with a lead, San Francisco goes in down 17-16.

3:23 Purdy with a pair of big completions, one to George Kittle for 23 and one to Deebo Samuel for 21. McCaffrey then gets the 49ers to the one and Purdy sneaks it in for the touchdown. 49ers 23 Seahawks 17.

3:34 Charvarius Ward is getting eaten alive by Metcalf and Lockett in this game.

3:38 With Seattle threatening in the 49ers red zone, Charles Omeninhu comes up with a huge play. Omenihu knocks the ball out of Smith’s hands and Nick Bosa falls on it for the recovery.

3:44 A completion from Purdy to Samuel and a pair of runs from McCaffrey get the 49ers to the Seattle 40 as the third quarter comes to a close.

3:48 Purdy opens the final quarter with a 33-yard completion to Jauan Jennings off play action. Two plays later he spins out of pressure and hits Elijah Mitchell in the left flat for a seven-yard touchdown.

3:58 The turnover by Omenihu has turned this game around.

Touchdown by the offense to go up 14, and the defense comes gets off the field quickly. Time for Kyle Shanahan to take the air out of the ball and spin the clock.

4:03 Purdy hits Deebo Samuel with a short pass off play action and the receiver takes it 74 yards for a touchdown. Brandon Aiyuk with a great block downfield to give Samuel room to run down the sideline.

This article has 59 Comments