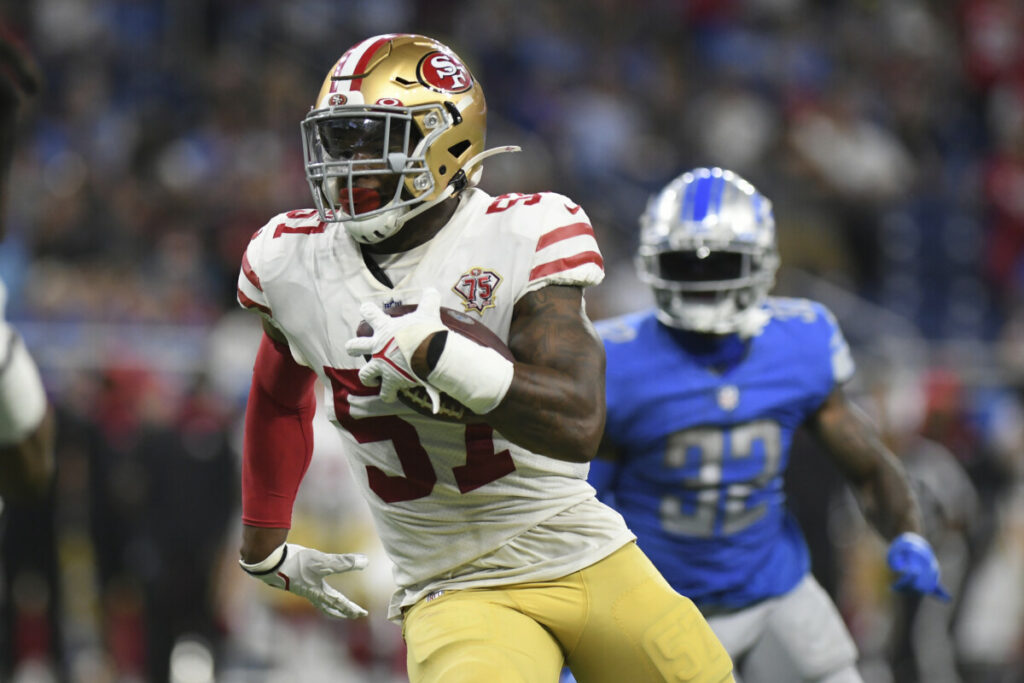 San Francisco 49ers linebacker Dre Greenlaw (57) returns an interception for a 39-yard touchdown against the Detroit Lions in the first half of an NFL football game in Detroit, Sunday, Sept. 12, 2021. (AP Photo/Lon Horwedel)

The 49ers are likely to be without their leading rusher when they take on the Jacksonville Jaguars at TIAA Bank Stadium in Jacksonville on Sunday.

Despite suffering a broken finger on his right hand in Monday night’s victory over Los Angeles, San Francisco had remained hopeful that Elijah Mitchell would be able to play on Sunday. That does not appear to be the case as the 49ers have listed Mitchell as doubtful for Sunday.

When asked if the finger had not responded as had hoped Kyle Shanahan told reporters, “It’s just how he feels with it. We thought it would be a little further along now. It obviously isn’t. That’s why he couldn’t go today. We are holding out hope because we still got 48 hours, but anytime that someone doesn’t go today, it’s tough.”

If Mitchell is unable to go, San Francisco will turn to Jeff Wilson Jr and Trey Sermon for the bulk of the carries in the running game.

Wilson made his season debut on Monday night and Trey Sermon hasn’t received a carry since week five.
Shanahan was asked about Sermon’s readiness, “He’s ready for whatever amount we give him. He’s been ready every week, so if Elijah is not up, that does give him an opportunity.”

In positive injury related news, safety Jaquiski Tartt and linebacker Dre Greenlaw may be activated from the injured reserve list for Sunday. The 49ers have until tomorrow to decide on them and will likely take all that time before making any official move.