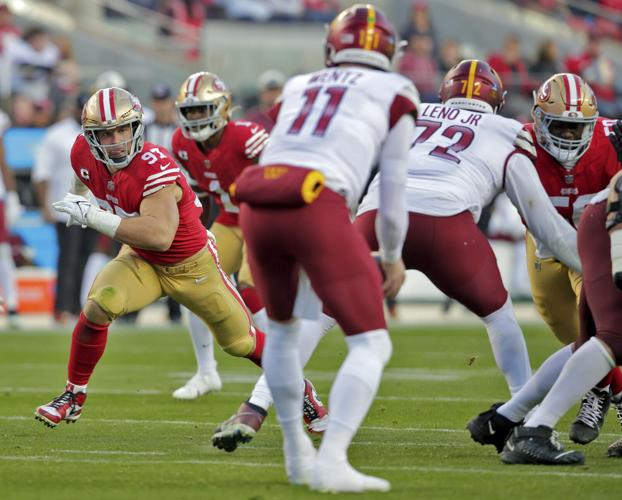 The 49ers are the hottest team in the NFL winning eight in a row. In the process they captured the NFC West championship.

San Francisco was only 3-4 prior to the start of the of this winning streak. Here are the five reasons behind the dramatic turnaround.

Whether it’s Jimmy Garoppolo or Brock Purdy the 49ers have received terrific play from the quarterback position throughout this eight-game win streak. The two have combined to post a 112.1 rating.

One of the more interesting aspects to the play is how similar each have been. Over the course of the current streak Jimmy Garoppolo posted a 71.5 completion percentage and averaged 7.98 yards per pass attempt with seven touchdowns and no interceptions.

Despite being a rookie with only a few snaps under his belt before being thrown in Purdy has posted nearly identical numbers. The rookie has completed 68.9 percent of his passes and averaged 7.98 yards per pass attempt with eight touchdowns and two interceptions.

The addition of McCaffrey through a trade with Carolina has been a game changer for the 49ers offense.

After making his debut in a limited role against Kansas City, McCaffrey made his first start as a Niner against the Los Angeles Rams and San Francisco has not lost since.

McCaffrey has averaged 109 yards from scrimmage and one touchdown per game over the winning streak.

Beyond the personal numbers, McCaffrey has played a large role in the improved performance of the quarterbacks. The veteran running back provides a sure handed checkdown option and his 51 first downs help keep the offense on the field.

The 49ers defense has been dominant, and Nick Bosa is leading the charge. Recently named to his third Pro Bowl, Bosa has recorded 10.5 sacks along with 25 of the 49ers 60 quarterback sacks over the eight-game streak.

Nothing helps create turnovers like pressure and hits on the quarterback. Bosa and the Niners defensive front have helped create 15 turnovers over the last eight weeks compared to nine in the first seven.

Ward was named to the NFL Top 100 list for his strong play in 2021. A hamstring injury in training camp forced him to miss the first four games. A broken hand while covering the opening kickoff against Carolina in his return sent him back to the sidelines.

Strong play from Tashaun Gipson led to Ward being moved to the slot, a position he’d struggled at earlier in his career.

The veteran defensive back has been stellar since that first performance. Ward has allowed a quarterback rating of only 66.36 over the last eight weeks. His three interceptions during this time are a career high.

San Francisco saw the return of Arik Armstead and Javon Kinlaw to the starting lineup, and both have made big plays.

Pressure from Armstead led to a Jimmie Ward interception against Miami. The defensive tackle was also instrumental in stopping Washington quarterback Taylor Heinicke on a fourth down quarterback sneak. This stop deep in Washington territory led to a quick 49ers touchdown.

Kinlaw saw his first action since week three against Washington. Although the stat sheet shows he made only one tackle, he played a key role in the Niners first fourth down stop of the game.

Facing fourth and goal from the one, penetration from Kinlaw forced two offensive linemen to focus on him. The attention on Kinlaw allowed linebacker Fred Warner a free run to stop Brian Robinson Jr. for no gain.

This article has 21 Comments