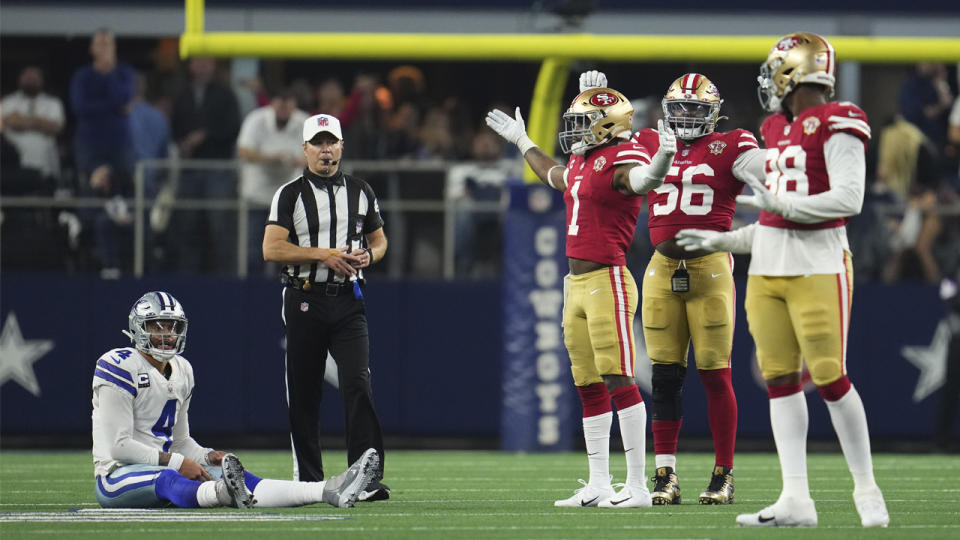 The San Francisco 49ers and Dallas Cowboys are set to face off Sunday afternoon at Levi’s Stadium in Santa Clara with a trip to the NFC Championship Game on the line.

Sunday will mark the ninth postseason meeting between the two organizations, tied for most in NFL history. San Francisco defeated Dallas last year in the Wild Card round, but the Cowboys hold the advantage in the series having won five of the first eight matchups.

San Francisco comes into Sunday as healthy as they have been all season. Only Jimmy Garoppolo and Ambry Thomas have been ruled out. The health comes as the team has won 11 straight with a high-powered offense averaging over 31 points per game. That offense coupled with strong defense has led to only three of San Francisco’s last 11 games being decided by one score or less over.

Like San Francisco, Dallas rides a high-powered offense and stifling defense into Sunday. Since October 30 the Cowboys have averaged 33.1 points and played in just five one score games. Dallas will be without starting left tackle Jason Peters. The veteran suffered a hip injury against Tampa Bay on Monday night.

Here are five things to watch for during the game:

1.) Can Brock Purdy handle the pressure?

Purdy has done a good job against pressure as evidenced by a 97.1 passer rating, best among the eight quarterbacks remaining in the playoffs. The rookie quarterback has thrown just one interception compared to five touchdowns. Against Seattle, Purdy posted the most passing yards in a playoff game by any 49ers quarterback not named Joe Montana. Now he will look to defeat the organization which helped turn Montana into a legend.

If Purdy is able to keep his level of play high the onus of protecting him will fall on the big guys up front.

San Francisco’s offensive line has been terrific this season. On Sunday they will face their stiffest challenge of the season.

Dallas gets after opposing quarterbacks like no other team San Francisco has faced. The Cowboys are second only to Philadelphia, recording a sack on 8.3 percent of drop backs.

Thirtysomething. No, not the hit television show which ran in the late 1980’s. It’s the 49ers magic number. When San Francisco attempts at least 30 rushing attempts they are 29-2 under Kyle Shanahan.

Over the course of their current win streak the 49ers have been dominant on the ground, averaging 154 yards per game. Christian McCaffrey, Elijah Mitchell and Deebo Samuel is the Holy Triumvirate of the Niners rushing attack.

The versatility of McCaffrey and Samuel allow Kyle Shanahan to align them all over the field. This forces defenses to tip their hand. If they stay in base personnel, it opens the passing game. If they add an extra defensive back the 49ers will use their power to run over them.

Dallas has allowed at least 136 yards rushing eight times this season. They posted a 3-5 record in those games, giving up 24.6 points per game.

3.) Will the 49ers defense force Dak Prescott to beat them?

The 49ers defense thrives when it can get to the quarterback. To do so on Sunday they will need to stop the Cowboys run game and force Prescott to beat them.

Losing Prescott in the beginning of the season may have been the best thing that happened for Dallas. That injury forced Mike McCarthy and Kellen Moore to lean more heavily on the run game to help backup quarterback Cooper Rush. The result is the Cowboys have become on of the more balanced offenses in the league.

“The most important part of our run game is the productivity,” said Cowboys head coach Mike McCarthy. “The efficiency comes in the attempts. We’ve got to make sure we continue to give those guys (Zeke Elliott and Tony Pollard) opportunities.”

San Francisco has struggled against teams that can run well. The 49ers have allowed 99 or more rushing yards six times this season. They are 2-4 in those games and have allowed just over 24 points per game in those contests.

The 49ers defense thrives when it can get to the quarterback. To do so on Sunday they will need to stop the Cowboys run game and force Prescott to beat them.

4.) Can the 49ers secondary keep everything in front of them?

The Cowboy’s passing game has been solid in 2022, finishing the regular season with the ninth highest net yards per pass attempt in the NFL. Their ability to stretch defenses vertically and horizontally at all levels makes them tough to defend.

CeeDee Lamb leads the Cowboys receivers who is at his best when working from inside. How DeMeco Ryans chooses to handle this will be something to keep an eye on early. Although Lamb doesn’t get deep often, his longest reception this year is 39 yards, he has a terrific relationship with Dak Prescott. Since Prescott returned from injury in week seven the duo has combined for 85 yards per game.

Tight end Dalton Schultz is second to Lamb in receptions for Dallas. The former Stanford Cardinal will be a challenge for the 49ers linebackers and safeties in coverage. Schultz caught seven passes for 95 yards and two touchdowns against Tampa Bay on Monday night. He led all Cowboys receivers in last season’s matchup with San Francisco, finishing with seven catches for 89 yards.

Don’t sleep on Tony Pollard in the passing game either. Pollard has excelled as a receiver this season averaging 9.5 yards per reception and getting into the endzone three times.

5.) Who wins the turnover battle?

San Francisco and Dallas were two of the best at forcing turnovers during the regular season, forcing 30 and 33 respectively.

Turnover differential is the best indication for wins or losses for the 49ers. Since the beginning of 2021 they are 23-3 when they don’t turn the ball over more than their opponent compared to 1-9 when they do.

This article has 43 Comments