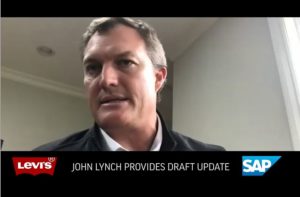 Monday afternoon, 49ers general manager John Lynch gave some media members a little virtual tour of his 2020 NFL Draft “war room,” which happens to double as his guest house. On his desk were three unfolded laptops, three stand-up computer monitors and three adjacent landline telephones – one dedicated to AFC trade partners, one to NFC teams, the third to internal 49ers and league communications. One huge flat-screen was mounted to the wall across the room, and it was flanked by two more freestanding units.

The one splash of color was a framed print of LeRoy Neiman’s painting of Dwight Clark making The Catch. Beyond that, Lynch’s office was a sea of screens and white walls.

“Kyle (Shanahan) and I, I think a big to-do was made that they came and hardwired our houses,” Lynch said. “Since we’ve been here, our houses have had systems as if we’re in our office. So it really wasn’t a big change for Kyle and I. It’s just getting everybody else up to speed.”

The coronavirus pandemic has changed virtually everything about life, and sports, in America over the past month. The NFL draft is one of the few major events that hasn’t been postponed or canceled, but it, too, is being significantly altered by a virus that has made it a terrible idea for human beings to gather together.

Thursday’s nationally televised first round will be a tonic to strung-out football fans. It will also be a grand experiment that promises to have a few moments of confusion, comedy and sheer panic on the part of 60-something personnel executives who can’t remember their log-in passwords.

NFL teams are used to conducting the draft remotely, each at its own team facility. But those individual efforts include dozens of scouts, coaches, medical team and support staff, all working in proximity to facilitate the next decision. That will be impossible this year. Lynch will have one techy at his office. I’m sure Shanahan will, too. But mostly the 49ers’ operation, like everyone else’s, will be a scattered web of internet connections.

Lynch said the Niners did an internal mock draft over the weekend. Monday, the NFL put together sort of a league-wide dry run. The Cincinnati Bengals had the first pick at 10 a.m. and, as noted in multiple media reports, they immediately glitched. Lynch said he thought the “chatter” about the event being chaotic were overblown, but admitted there were some inefficiencies at the beginning.

“Kind of important stuff,” he said with a  laugh, “where two teams were talking and the whole league was hearing it. That kind of stuff. But I think everyone then kind of tuned in, when they tell you to mute your stuff, you should probably listen. … But the good news was, I think the technology was working fine.”

NFL head coaches and GMs will get online again Tuesday for another run.

Really, draft night is the least of the NFL’s concerns. Most of the heavy lifting is always done by phone for that one. It’s the process leading up to the draft, and everything to follow, that is truly being impacted by the coronavirus and its aftermath.

Lynch talked about that a little Monday. Stay-at-home orders have made scouting more difficult in a couple ways, he said. The first is teams’ inability to spend meaningful time with prospects. These young athletes represent huge investments of time and money. It would be nice to, you know, get to know ’em a little before you hire them.

“When you bring in a guy in for a 30 visit and get to spend two days with him,” Lynch said, referring to the 30 official visits each team is allowed to schedule with potential draftees. “Sometimes you have the meeting at a combine, it’s in front of 20 coaches. These guys are being wrung through the wringer, and a guy just doesn’t have a real impressive 15 minutes. This has happened a number of times. And then they come out for a 30 visit, they loosen up, you get ’em comfortable, and you’re saying, ‘This is exactly the type of guy.’”

The other disparity has been in medical examinations. That applies to prospects who weren’t invited to (or chose not to attend) the NFL scouting combine in February, and to those who under normal circumstances would receive a follow-up exam.

“Oftentimes at the combine, it’s ‘Hey, he’s got a medical situation going on, but we’re gonna recheck here in six weeks and we’ll give you a much clearer picture,’” Lynch said. “That really hasn’t been able to happen, other than guys proactively, and their agents, sending letters from doctors. But our doctors haven’t had the opportunity to get their hands on (information).”

Of course, no one affiliated with the NFL should be complaining too loudly. The NBA, NHL and MLB are all in the midst of suspended seasons; no one knows when any of them will begin play, and basketball and hockey may well be unable to crown a 2020 champion. NCAA spring sports were wiped out along with March Madness. The 2020 Tokyo Olympics are on hold for a year.

The NFL was lucky enough to be in its deep downtime when the virus hit America. For the most part, it has been business as usual for the country’s most popular sport.

That won’t last forever. NFL teams generally hold rookie mini-camps right after the draft, and veteran mini-camps shortly thereafter. Those are probably off the table. May and June OTAs are in question, too. Training camps as July turns to August? Preseason games? The start of the regular season in September? Nothing is written in stone right now, because no one knows how the pandemic is going to play out.

How is Lynch feeling about it all?

But, Lynch said, “After free agency, I can’t tell you how many people called or touched base and said, ‘Thank god you did that, because it’s the only thing that we’ve got to keep us entertained.’”

It’s hard to explain the comfort sports can deliver during a crisis, but the phenomenon is real. And for the NFL and the 49ers, the show will go on Thursday, Friday and Saturday.

This article has 49 Comments