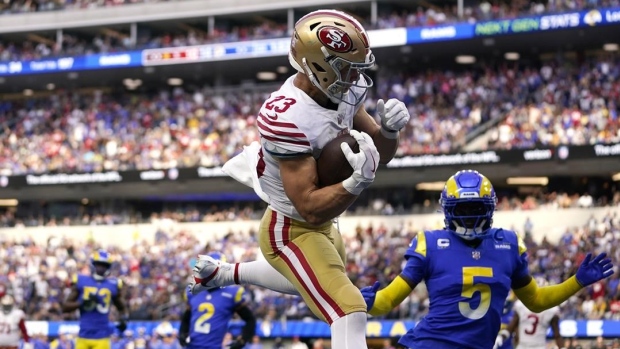 Every game during the NFL season is followed up with overreactions from with fans and media pundits. If the home team loses there’s blame that must be levied, and after wins everything is rosy.

After struggling early, the San Francisco 49ers dominated the Los Angeles Rams in the second half, sweeping the season series for the fourth year in a row. The 31-14 win allowed the 49ers to keep pace with Seattle in the NFC West. In addition, the 49ers moved into the seventh and final NFC playoff spot as they head into their bye week.

Here are some of the best overreactions I’ve encountered following the 49ers big win.

Christian McCaffrey is a better offensive weapon than Deebo Samuel!

After the performance McCaffrey put on yesterday it is easy to understand why someone would feel this way.

Sunday was just McCaffrey’s tenth day as a member of the 49ers. He was spectacular against Los Angeles, becoming the first player since LaDainian Tomlinson in 2005 to throw, run and catch a touchdown in a single game.

As good as McCaffrey was, don’t forget what you saw Deebo Samuel do less than a year ago in the same stadium.

In week 18 of 2021, Samuel threw a touchdown pass to Jauan Jennings and ran for one as well.

McCaffrey’s vision makes him the better running back of the two, and they are both strong in the underneath passing game. McCaffrey’s presence will allow Samuel to focus on making plays down the field more often and with the occasional run, similar to how he was utilized his first two seasons in San Francisco.

The 49ers will need both healthy to make a Super Bowl run this season.

Jimmy Garoppolo is playing his best football of his career!

Not an overreaction based on Sunday’s performance.

Against the Rams on Sunday, Garoppolo completed 21 of 25 attempts for 235 yards and two touchdowns for a 132.5 passer rating.

His 84.0% completion percentage is the fifth highest in a single game in franchise history. Steve Young had a pair of games which were higher, while John Brodie and Joe Montana each had one.

The addition of McCaffrey seemed to have a positive impact on Garoppolo. On several occasions he chose to check the ball down to the running back instead of forcing a throw into coverage.

Garoppolo also saw success with a deep throw. His 56-yard completion to Ross Dwelley was the first of Garoppolo’s career on a throw outside the numbers which travelled 30 or more yards in the air.

Strong games are nothing new to Garoppolo. We saw him play well against the Rams earlier this season and Carolina the following week. The thing to watch for is if he can start stacking these performances together.

If Garoppolo begins to show consistency it will be bad news for the rest of the NFC.

This is the other way around, Armstead needs Bosa.

In his two full seasons playing alongside Bosa, Armstead has recorded 16 sacks. During his other five seasons Armstead has a total of 12.5 sacks.

Having said that, the 49ers defense needs Armstead to return.

After a strong performance in Carolina, San Francisco has seen the interior of the defensive line get pushed around without Armstead to anchor against the run. Getting him back for the second half would be a key addition.

Mike McGlinchey is a fan favorite.

Every week there is a play or two from McGlinchey that gets everyone talking. For example, when the veteran right tackle was beat by Leonard Floyd for a sack in the first half everyone started talking about him.

Here’s the thing, McGlinchey is an average to above average starting right tackle. He is going to get beat a couple times nearly every week in pass protection. At the same time, he is going to hold up more often than not.

Case in point, Jimmy Garoppolo’s touchdown throw to Christian McCaffrey to give San Francisco the lead.

The throw and catch were both really good, however neither occurs if McGlinchey and the rest of the offensive line don’t provide Garoppolo the time necessary to sit in the pocket and scan the entire field.

McGlinchey is in the final year of his rookie contract leaving his return to the team for 2023 in question, so fans may soon get their wish.

The 49ers offense moved the ball well in losses to Atlanta and Kansas City. The problem was unforced errors such as dropped passes, penalties or turnovers kept derailing promising drives. As a result, they were able to manage only 14 and 23 points respectively.

After a couple mistakes early in the game, the offense was nearly mistake free through the second half on Sunday.

With the players executing at a high-level San Francisco scored touchdowns on three straight possessions to pull away.

This article has 30 Comments