It is moving time in the NFL.

With only seven weeks left to play we will begin to see a separation between the true contenders and pretenders.

For the San Francisco 49ers (6-4) this stretch begins when they take on the New Orleans Saints (4-7) Sunday afternoon at Levi’s Stadium.

San Francisco will play five of their final seven at home and never leave the Pacific time zone. This does not mean the schedule will be easy as four of the 49ers next five games will be against teams fighting for a playoff spot.

Here are my five things to watch for on Sunday against New Orleans.

Garoppolo matched a career high with four touchdown passes against the Arizona Cardinals. The 49ers signal caller hit this milestone three times in 2019 on the way to a spot in the Super Bowl.

On Sunday he will be facing a New Orleans defense which has allowed only 13 touchdown passes this season to go along with only 5.8 net yards per pass attempt, eighth best in the NFL.

The 49ers offensive line is going to have its hands full with the New Orleans pass rush.

Led by Cameron Jordan, long with linebacker Demario Davis and Kaden Elliss the Saints have recorded a sack on 8.58 percent of drop backs, sixth best in the NFL.

While the New Orleans defense has done a good job against the pass this season, they have struggled against the run. Coming into Sunday, the Saints have allowed the tenth most rushing yards per attempt, 4.6.

This plays into the strength of a 49ers offense which is coming off its most explosive game on the ground this season. The Niners starters averaged 6.8 yards per carry against Arizona on Monday night.

San Francisco has gained 157 and 159 yards on the ground the last two weeks thanks in large part to the return of Elijah Mitchell.

Making his way back after suffering a knee injury in week one, Mitchell has averaged 5.48 yards per attempt as part of a three headed attack along with Christian McCaffrey and Deebo Samuel.

Don’t let the Saints record fool you, their offense is potent.

The trio gives New Orleans a passing game which can attack every level of a defense.

Only a rookie, Olave has impressed by averaging 14.9 yards on 51 receptions. He can take the top off the defense.

Kumara and Johnson team up to stress the underneath coverage of the linebackers and safeties. Despite missing two games, the running back is the Saints second leading receiver with 43 grabs for 385 yards.

Johnson came into the NFL as a wide receiver but has made a successful transition to tight end in 2022. He leads New Orleans in touchdown receptions with five as he has blown past his numbers from the first two seasons. 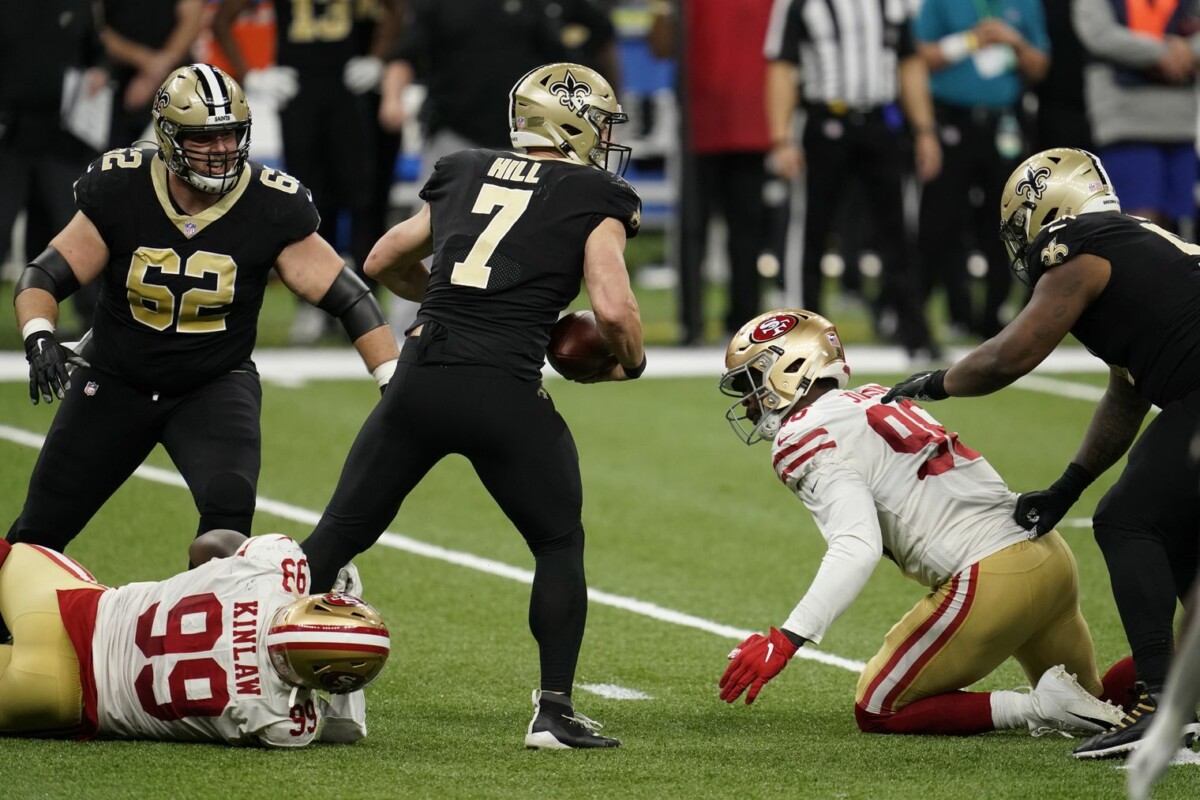 While Alvin Kamara leads the Saints in rushing yards, Hill’s five rushing touchdowns make him the larger threat in the redzone and in short yardage situations.

Stopping Hill in short yardage situations will help the San Francisco defense avoid extended drives. As with Kamara and Johnson in the passing game, this will put stress on the 49ers linebackers and safeties.

One thing about Hill, he has not proven to be a threat in the passing game. He has been targeted only six times all season.

For San Francisco, winning the turnover battle is key.

Since the start of 2021, the Niners are 17-3 when they turn the ball over less than or the same as their opponent. When San Francisco has more turnovers than their opponent they are 1-9.

Jimmy Garoppolo has gone three games without an interception for the first time in his career. On Sunday he will face a New Orleans defense which has been able to record only two interceptions this season.

Turnovers have been an issue for the Saints all season.

New Orleans comes into Sunday with a turnover differential of -12. Their 19 turnovers are the third highest in the league and their seven takeaways are the second fewest.

This article has 24 Comments