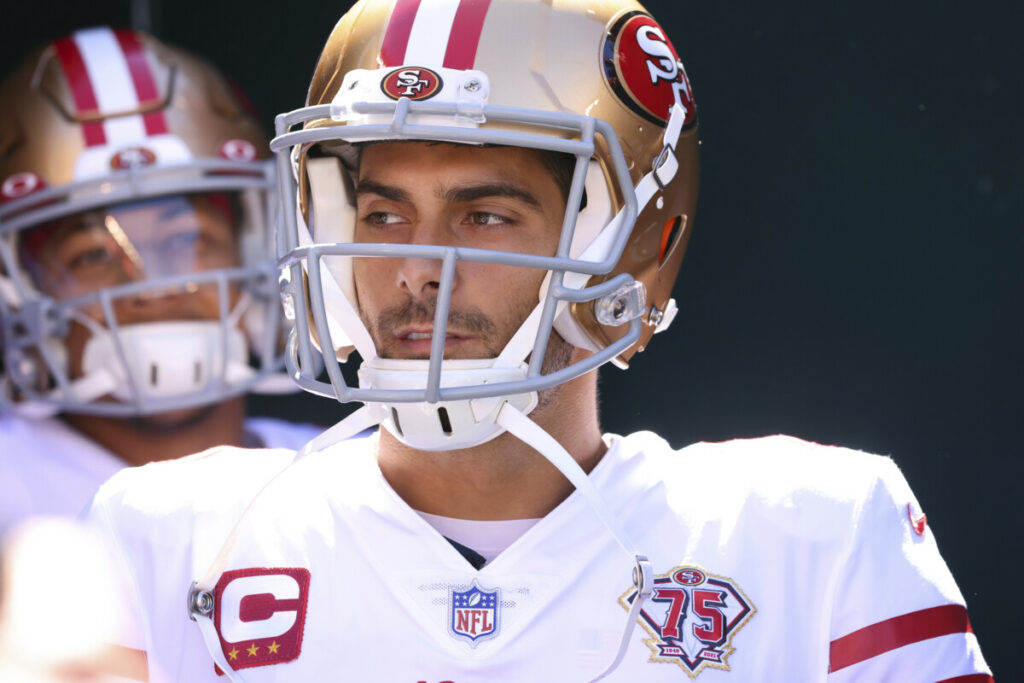 This is the live blog for the 49ers Week 8 matchup with the Chicago Bears from Soldier Field in Chicago. I will provide updates and analysis throughout the game.

9:39: After missing the Colts game, Trent Williams is active and will be starting at left tackle. His presence should help Jimmy Garoppolo in the pocket and help in the run game.

9:43: With Azeez Al-Shaair inactive, it’s likely that Demetrius Flannigan-Fowles will be starting in his place. This will mean two of the three starting linebackers for San Francisco today are converted safeties. Marcell Harris is making the transition this season, and Flannigan-Fowles was a safety in college at Arizona.

10:04 Deebo Samuel with a drop on the first play of the game.

10:13 Two drops by Deebo Samuel on the opening drive of the game, a holding call on Trent Williams. Running JaMycal Hasty into the middle of the line of scrimmage. Joey Slye misses a 48-yard field goal attempt after Garoppolo hits Sanu with a 19-yard completion to set up the attempt. This is a terrible start for the 49ers.

10:24 49ers defense is going to have its hands full with Khalil Herbert today. The rookie gains 22 on his first carry of the game, but penalties stop the drive and Cairo Santos hits his field goal attempt. Bears 3 49ers 0

10:31 Elijah Mitchell kicks off the 49ers drive with a 26 yard gain on a toss sweep around the left side. Mitchell and Harbert were both 6th round draft picks this year.

On the next play Deebo Samuel finally holds on to a Garoppolo pass for a gain of 11. A short run by Mitchell and a completion to Hasty on third down set the 49ers up for a 48-yard field goal and this time Slye hits it to tie the game at 3.

49ers need to focus on running to the left side. They run the ball much better in that direction.

10:35 On first down, Bears quarterback Justin Fields can’t keep his eyes off the pass rush before throwing incomplete. Then on third down Arik Armsted jumps offside making it 3rd and 4. Fields hits it for a first down.

The mistakes that have hurt the 49ers over the current four game losing streak, penalties and drops,  have shown up already.

10:44 Chicago with a methodical drive wrapped up by a nice throw from Justin Fields to Jesse James for an 8-yard touchdown while rolling to his left off play action.

San Francisco had Chicago in 3rd and 9 to start the possession. Armstead’s offside penalty made it 3rd and 4, from that point the 49ers defense had no answer. Bears 10 49ers 3

10:52 Nice job by Garoppolo to buy time and move left, finds Brandon Aiyuk for a gain of 23. Next play hits Samuel for a gain of 16. On third and seven Mohamed Sanu drops the pass over the middle. That’s three drops in three possessions for 49ers wide receivers today. Joey Sley hits the field goal. Bears 10 49ers 6

10:59 49ers defensive line getting no pressure on Justin Fields so far today.

11:05 And just like that Nick Bosa comes up with a big sack.

11:07 On 2nd and 21 Fields takes off and gains 16 yards on a scramble, plus an illegal hands to the face by Arden Key and it’s a Chicago first down.

11:23 Garoppolo hits Aiyuk on back-to-back throws to gain 21 yards, then goes over the top and hits Deebo Samuel for a gain of 50 to set up a chip shot field goal by Joey Slye to end the first half. Bears 13 49ers 9

11:26 Garoppolo finishes the first half 10-19, 163 yards. Brandon Aiyuk has 44 yards receiving in the first half. That’s more than any game this season.

Chicago has found a lot of success when running to the left, and the 49ers defense has struggled to get pressure on Justin Fields so far. Will be interesting to see if DeMeco Ryans can come up with any adjustments at halftime.

11:47 More of the same from the 49ers defense on the opening drive of the second half. Fields starts the drive with an 18 yard completion to James, two plays later scrambles around the right side for 15 and then hits former 49er Marquise Goodwin with a slant for a gain of 22 on 3rd and 13.

Four possessions for Chicago so far in this game. They’ve scored on all of them. Bears 16 49ers 9

12:02 On 3rd and 20 Deebo Samuel takes a screen pass from Jimmy Garoppolo 84 yards. The run after catch looked like former 49ers great John Taylor. Samuel drops the ball a lot, but plays like that are why you keep feeding him.

On 3rd and goal, Garoppolo keeps the ball and runs it in for a two-yard touchdown. Joey Slye misses the extra point though. Bears 16 49ers 15

12:14 They do. After giving up a couple first downs the 49ers defense finally gets a stop, sacking Fields on second down and force an incompletion on third and 16.

Brandon Aiyuk returns the punt 21 yards to set the offense up near midfield. This will be the best starting field position for the 49ers in this game.

12:24 Talk about teamwork. Elijah Mitchell runs into the center of the line, and the entire offense pushes him across the goal line for a five-yard touchdown. Garoppolo then hits Aiyuk over the middle to convert the 2-point try. 49ers 23 Bears 16

12:34 Just like that the 49ers defense gives up another scoring drive. This time it’s Justin Fields making Arik Armstead miss on fourth and one, and then scrambling 22 yards around the left side. Cairo Santos misses the extra point though. 49ers 23 Bears 22

12:41 The 49ers offense responds, going 75 yards on only five plays. Garoppolo with big throws to Mohamed Sanu and JaMycal Hasty to pick up 42 yards, a 27-yard run by Elijah Mitchell, and Garoppolo keeps on the zone-read for the a five-yard touchdown run. 49ers 30 Bears 22

Coming off his worst game of the season, Garoppolo is playing his best.

12:46 Jimmie Ward has been ruled out for the rest of the game. Tavon Wilson is in to replace him.

12:50 Big stop for the 49ers defense. Samson Ebukam finishes it off with a sack of Fields.

1:00 49ers ride the back of Elijah Mitchell to get into field goal range and Joey Slye hits the 32-yard field goal to ice the game for San Francisco. 49ers 33 Bears 22

1:12 Be back shortly with the game wrap.

This article has 53 Comments