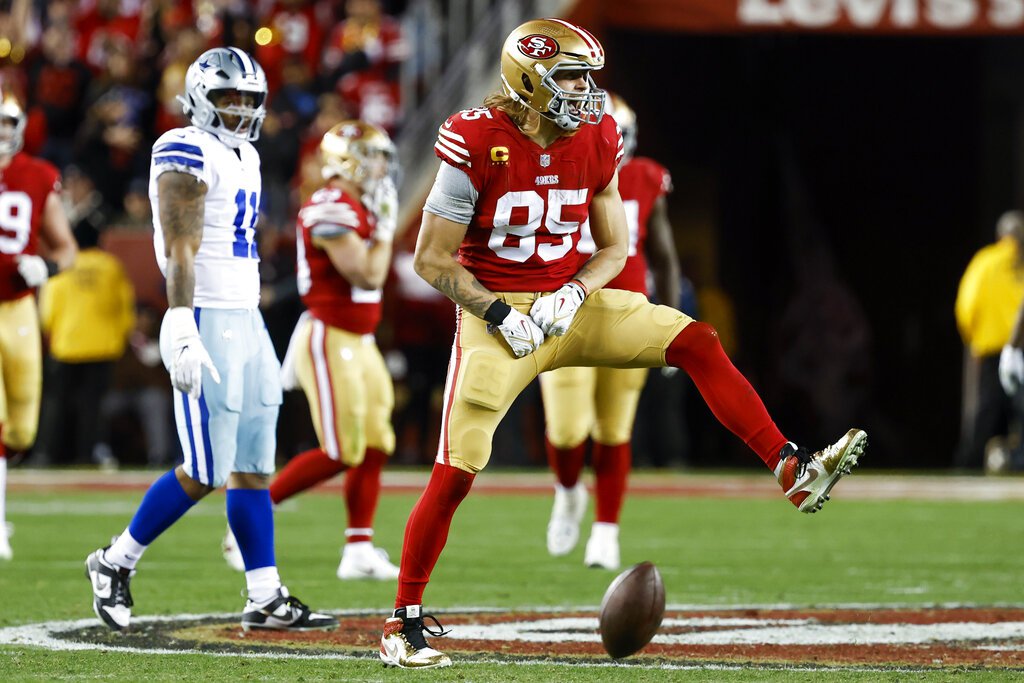 The San Francisco 49ers punched their ticket to the NFC Championship Game for the second year in a row and third under Kyle Shanahan after beating the Dallas Cowboys 19-12 in the NFC Divisional round on Sunday evening at Levi’s Stadium.

Next up for San Francisco is the Philadelphia Eagles. The 49ers will take on the top seed in the NFC next Sunday at Lincoln Financial Field in Philadelphia with the winner advancing to Super Bowl LVIII in Glendale, Ariz.

Sunday’s matchup was a battle with both teams landing shots throughout the first half. In the fourth quarter the 49ers saw the toll their body blows had on the Dallas defense. Christian McCaffrey took the first play of the quarter in for the lone San Francisco touchdown of the game. Following a Cowboys field goal, Kyle Shanahan’s offense ran nearly eight minutes off the clock before extending the lead back to seven.

Here are five things to watch for during the game:

Purdy found himself under pressure from the Dallas pass rush throughout, especially in the first half. The Cowboys were able to sack Purdy twice and land four hits on the rookie quarterback.

Despite a rough start, Purdy was able to make enough plays to help take a 9-6 lead into the locker room at halftime.

As he did last week against Seattle, Purdy was on the money in the second half. The rookie quarterback connected on seven of ten attempts for 85 yards as he helped the team overcome a fumbled punt by Ray-Ray McCloud to take the lead for good on the first play of the final quarter.

Purdy finished the game 19-29, 215 yards with no touchdowns, and more importantly no interceptions.

2.) Will the 49ers find success on the ground? YES, eventually.

San Francisco struggled with the Cowboys speed in the first half leading to only 27 yards on 11 attempts.

In the second half the 49ers offensive line made the necessary adjustments to the Cowboys speed. In doing so they were able to get to their assignments and pave the way for Christian McCaffrey, Deebo Samuel and Elijah Mitchell to pick up 86 yards on 21.

McCaffrey got into the endzone for the deciding score to open the final quarter, and Elijah Mitchell pounded out 49 yards on 13 second half carries to take control of the game.

With 31 total carries, the 49ers improved to 30-2 under Kyle Shanahan in games they attempt at least 30 rushes.

3.) Will the 49ers defense force Dak Prescott to beat them? YES

Dallas found success on the ground throughout the first half, picking up 55 yards on 13 carries. However, an ankle injury to Tony Pollard on a reception late in the half changed the game.

With Pollard on the sideline, Dallas could muster just 19 yards on the ground in the second half.

As the ground game began to stumble, the Cowboys fate was placed on the shoulders of Dak Prescott. The veteran quarterback would prove not to be up to the task.

Prescott threw a pair of interceptions in the first half and in the second he completed just 11 of 21 attempts.

Late in the fourth quarter Prescott had Michael Gallup open deep down the middle of the field. As was the case for much of the half his throw was well off the mark, falling harmlessly to the ground.

Prescott finished the night 23-37, 206 yards, one touchdown and the two interceptions.

4.) Can the 49ers secondary keep everything in front of them? YES

For the second week in a row the 49ers secondary gave up one deep ball, however this time it did not result in any points.

Dak Prescott connected with CeeDee Lamb for 46 yards on a deep shot down the left sideline in the third quarter. A few plays later Dallas would again try to hit Lamb deep, but linebacker Fred Warner ran stride for stride with the receiver to force the incompletion leading to a Dallas punt.

No Cowboys receiver outside of Lamb would get down the field. Instead the Cowboys were forced to take underneath throws and the 49rs defenders did a good job of rallying to the ball to minimize the damage.

Dalton Schultz finished as the Cowboys second leading receiver. The tight end was targeted ten times but finished with just five receptions for 27 yards thanks to solid coverage by the 49ers safeties and linebackers.

The 49ers recorded two takeaways to only one for Dallas.

On the Cowboys second possession Deommodore Lenoir picked off Prescott on a throw along the right sideline. San Francisco took over at the Dallas 21 and used the turnover to score the first points of the game on a Robbie Gould field goal.

With the game tied and six and Dallas threatening to score, Jimmie Ward got his hand on a pass intended for Lamb. Fred Warner was in the right spot and came away with the 49ers second turnover of the game. The offense then moved the ball into field goal range and Gould hit his third field goal of the half to give San Francisco a 9-6 lead at the half.

The 49ers returned the favor when Ray-Ray McCloud fumbled on a punt return following the opening Dallas possession of the second half. Despite getting the ball at the 49ers 21, they too would manage only a field goal.

The 49ers are now 24-3 since the start of the 2021 season when they don’t turn the ball over more than their opponents.

This article has 31 Comments