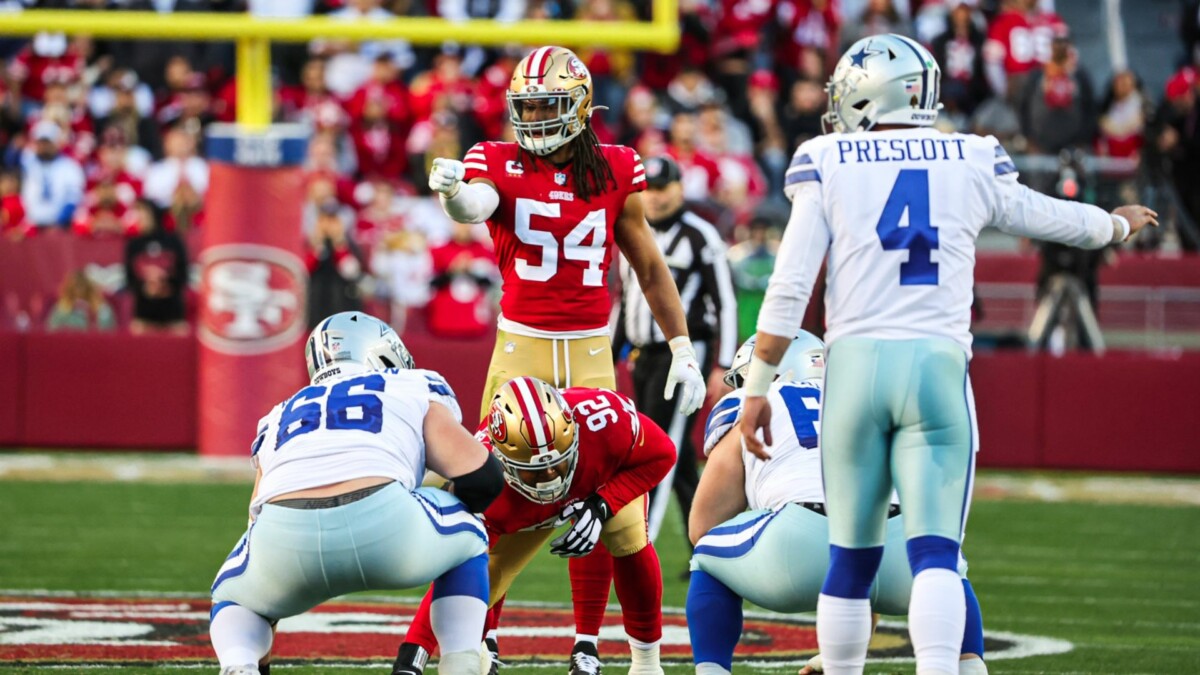 On to Philadelphia. The 49ers will take on the Eagles next Sunday for the right to go to the Super Bowl in Glendale, Az. Sunday’s matchup will mark the sixth time San Francisco has played for the NFC title in the last twelve years.

In a physical matchup featuring several stand out performances from several players, San Francisco outlasted the Dallas Cowboys to take to their twelfth consecutive victory by a score of 19-12.

Let’s hand out some game balls:

Warner lived up to the nickname “All-Pro Fred” against Dallas. The linebacker led San Francisco’s defense with nine tackles including one for loss. He was solid in coverage as well, allowing only two receptions for 15 yards on four targets.

Warner’s interception late in the first half took away a Dallas scoring opportunity. The interception was his first since picking off Patrick Mahomes in Super Bowl LIV.

In the second half Warner was in perfect position once again. After showing blitz, he raced back into coverage, running stride for stride with Dallas receiver CeeDee Lamb. His positioning kept Lamb from making a catch deep down the middle and forced a punt.

Ward finished the night with seven total tackles, one for loss, and broke up a pair of passes from Dak Prescott.

With Dallas driving deep into 49ers territory late in the second quarter, Ward read the inside route of Lamb perfectly. Although he was unable to get the interception, Ward’s deflection became a turnover when Warner grabbed the ball and headed the other way.

Lenoir came away with the first big play of the day for San Francisco when he picked off a Prescott pass along the left sideline intended for Michael Gallup. The interception was Lenoir’s second of the postseason and set the 49ers offense up deep in Dallas territory leading to the first points of the game.

Ebukam recorded a sack of Prescott, his first sack of this postseason and third of his career.

The sack was the second big play of the game for Ebukam who blocked the extra point attempt of Brett Maher following a Cowboys touchdown in the first quarter. The blocked PAT was the first by a member of the 49ers in postseason history.

Without that extra point, Dallas saw the 49ers tie the game with a field goal and never managed to regain the lead.

The Purdy to Kittle connection was alive and well against Dallas. Kittle caught all five targets which came his way for 95 yards. Four of the five receptions went for 16 yards or more.

Kittle had a pair of key plays on the 49ers lone touchdown drive.

On the third play of the possession Kittle made a bobbling catch down the middle of the field. Kittle wasn’t supposed to run a route of the play, but when he saw Purdy unable to find a receiver the tight end took off into an open area of the field. Purdy saw Kittle put his hand up and made the throw to get the offense across midfield.

Later in the drive, Kittle drew a holding penalty from Cowboys safety Donovan Wilson on third and long to nullify a Cowboys sack and extend the drive.

For the first time since stepping in for Jimmy Garoppolo, Purdy did not throw for at least two touchdowns.

Despite being held without a touchdown pass it was a solid effort which saw Purdy complete 19 of 29 attempts for 214 yards. He is the first rookie quarterback since at least 1970 to throw for at least 200 yards in back to back postseason games.

Purdy completed passes of at least 17 yards on each of the 49ers five scoring possessions and once was terrific in the second half for the second game in a row. He has now completed 16 of 21 passes for 270 yards and two touchdowns after halftime during this postseason run.

Against Dallas, McCaffrey finished with 16 touches for 57 yards and scored the 49ers only touchdown with a two yard run up the middle on the first play of the fourth quarter.

McCaffrey’s touchdown gave him at least one in eight consecutive games. The touchdown streak is the longest of his career and the longest by a member of the 49ers since Terrell Owens in 1998.

Mitchell finished as the 49ers leading rusher with 14 carries for 51 yards.

After having only one carry for two yards in the first half, the second year back helped San Francisco take control of the game in the second half. Mitchell picked up 49 yards on 13 carries after halftime and was a big reason the 49ers were able to control the clock.

The 49ers offensive line struggled with the speed of Dallas’ defense in the first half, limiting San Francisco to just 27 yards on eleven rushing attempts.

In the second half the big guys up front were ready for the challenge, creating rushing lanes for McCaffrey, Mitchell and Deebo Samuel. With improved blocking up front the 49ers were able to gain 86 yard on 21 second half rushing attempts to put the game away

Gould’s 21 postseason field goals as a member of the 49ers is the most in franchise history.

This article has 50 Comments