The 49ers opened their 2022 home slate with a 27-7 victory over the Seattle Seahawks on Sunday. The win came with a cost as Trey Lance was lost for the season late in the first quarter to a broken ankle

Let’s take a look at what the coaches film shows for the key plays from the win.

There has been a lot of discussion this week about the use of Trey Lance as a runner. Let’s face it, running is one of the key traits possessed by Lance, and something that drew Kyle Shanahan’s attention.

The expectation was for the 49ers offense to be run heavy during the early weeks while Lance got comfortable. They would then use play action passes to help simplify the reads for Lance.

We saw this play out in week one, and the running portion carried over to week two.

Here is the design of the play: 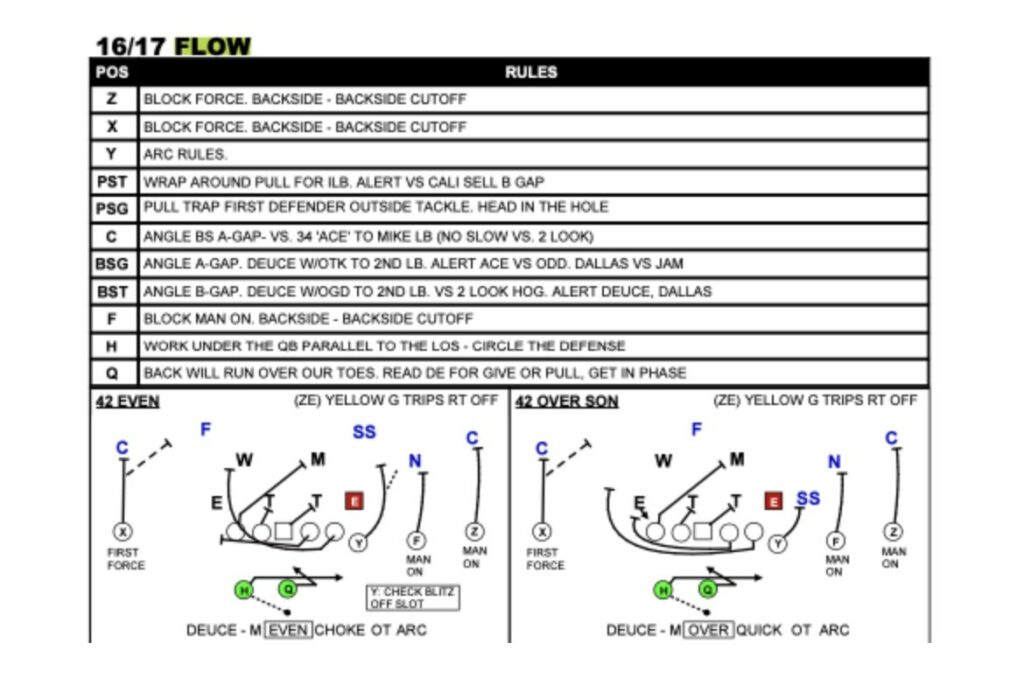 Trey Lance does not read the defensive end correctly and gives the handoff to Deebo Samuel around the right end.  Samuel makes an incredible play out of this, going 51 yards.

Had Lance kept the ball himself and run the correct path there was space for a big gain as well.

When something works or is open, good play callers will take note and come back to it as often as possible.

Two plays after the big run by Lance, the 49ers offense finds itself in the same down and distance and Kyle Shanahan goes back to counter bash. The only difference this is the play has been flipped.

This time, Trey Lance makes the correct read to keep the ball and run to the right side. The hole is there, but Trent Williams gets hung up by the pile created when Mike McGlinchey drives the Seahawks defender to the ground. This ruins the timing of the play and Trey Lance gets caught up behind Williams. With his momentum slowed, Lance is unable to get to the opening on the right side before hie is hit by the linebacker.

Lance suffers a broken ankle on the play and will be lost for the remainder of the 2022 season. An awful result on an otherwise solid play call.

Big play for Garoppolo and the 49ers offense

Jimmy Garoppolo takes over at quarterback for the next possession, but the formula does not change.

Seattle sends a blitz, and the 49ers offensive line does a solid job of picking up the extra rusher.

Garoppolo sees the Seahawks defender jump Deebo Samuel on the flat route and delivers a strike to Ross Dwelley who has been left alone on the out. Dwelley easily makes the catch and does the rest by getting into the endzone for San Francisco’s first touchdown of the day.

Talanoa Hufanga is a playmaker

Whether it’s making a stop on the run or breaking up a pass in the secondary, second year safety Talanoa Hufanga has been all over the field for the 49ers defense throughout the first two games of the season.

On this play Hufanga gets matched up with Tyler Lockett. Hufanga is right with Lockett on the break and undercuts the route. He is unable to make the interception, but fellow safety Tashaun Gipson is right there for the interception.

Making something out of nothing

We’ve heard repeatedly how quick Jimmy Garoppolo’s release is, but this is ridiculous.

On the opening play offensive play of the second half, Garoppolo runs a naked bootleg and has two Seattle defenders right in his face as he begins to turn. Somehow, he is able to get the ball out to Jauan Jennings who is able to make the most of the play for a gain of three. Seattle is called for a facemask adding 15 yards onto the end of the play.

This article has 31 Comments