The San Francisco 49ers saved roughly $11.5 million by signing quarterback Jimmy Garoppolo to a restructured contract at the end of August. The team has since utilized that savings to re-sign members of its core.

Last week the team extended punter Michell Wishnowsky with a new four-year deal. San Francisco followed that up on Monday when they announced the signing of Dre Greenlaw to a two-year extension through the 2024 season.

Greenlaw was originally selected by the 49ers in the fifth round of the 2019 NFL Draft. Over the past four seasons, he has appeared in 33 games, including 25 starts, and registered 196 tackles, four passes defensed, 2.0 sacks, and two interceptions, one of which he returned for a touchdown. He has also started six postseason contests and added 18 tackles, one forced fumble and one fumble recovery. Greenlaw was named to the PFWA All-Rookie Team and awarded the Thomas Herrion Memorial Award in 2019, which is given annually to the rookie or first-year player who has taken advantage of every opportunity, turned it into a positive situation and made their dream turn into a reality.

On Wednesday the 49ers announced announced they have promoted RB Marlon Mack to the active roster from the team’s practice squad. To make room on the roster, the team placed QB Trey Lance on the Injured Reserve List. According to head coach Kyle Shanahan, Lance will be out for the remainder of this season.

Mack originally signed to the team’s practice squad on September 14, 2022.

Benkert originally entered the NFL after signing as an undrafted free agent with the Atlanta Falcons on May 1, 2018. Over the past four seasons with the Falcons (2018-2020) and the Green Bay Packers (2021), Benkert has appeared in one game and spent time between the two team’s practice squads and active rosters. He was in Santa Clara last week for a tryout.

A 27-year old native of Baltimore, MD, Benkert attended the University of Virginia, where he appeared in 24 games for the Cavaliers and completed 534 of 925 passes for 5,759 yards and 46 touchdowns after transferring from East Carolina University.

Coleman was originally drafted by the Atlanta Falcons in the third round (72nd overall) of the 2015 NFL Draft. Coleman was previously with the 49ers from 2019-2020. He has appeared in 89 games (37 starts) and registered 777 carries for 3,393 yards and 24 touchdowns while adding 128 receptions for 1,273 yards and 12 touchdowns. Coleman has also appeared in eight postseason games (two starts) and recorded 86 carries for 388 yards and three touchdowns as well as 12 receptions for 108 yards and two touchdowns.

Last season, Coleman appeared in 11 games (5 starts) with the Jets, where he finished with 84 rushes for 356 yards to go along with 11 receptions for 49 yards. 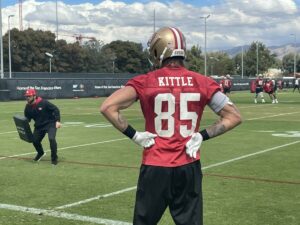 George Kittle was back at practice on Monday. The All-Pro tight end appears to be on track to make his 2022 regular season debut after missing the first two games with a groin injury.

Arik Armstead (foot), Daniel Brunskill (hamstring), Ty Davis-Price (ankle), Tyler Kroft (knee), and Trent Williams (vet day) did not practice. The injury to Armstead is not expected to keep the defensive lineman out of Sunday night’s game against the Denver Broncos.

This article has 34 Comments