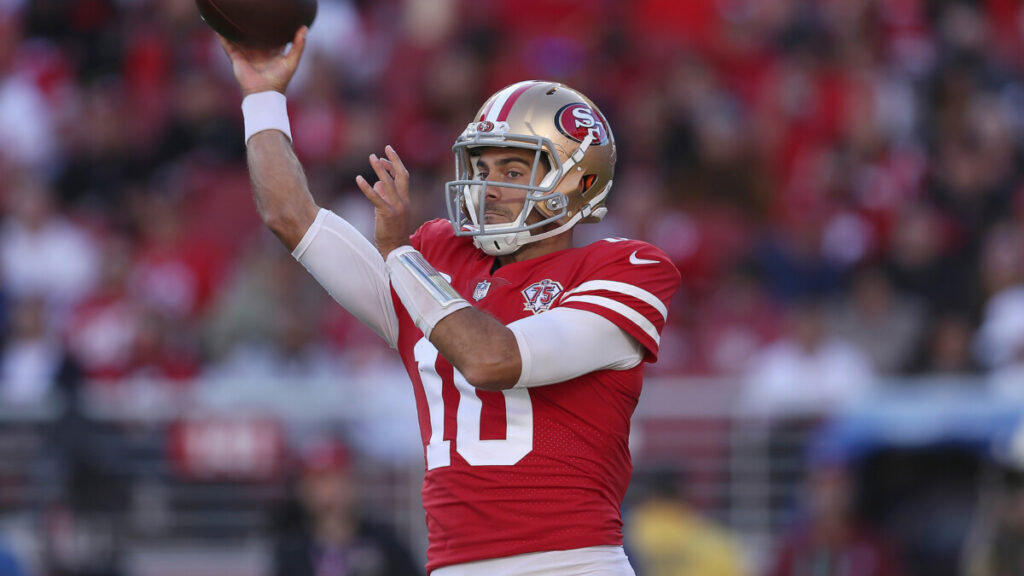 Welcome to the live blog for today’s matchup between the San Francisco 49ers (4-5) and Jacksonville Jaguars (2-7) from TIAA Bank Stadium in Jacksonville. Follow along for updates and analysis throughout the game.

12:42 Aaron Banks makes his regular season debut with about three minutes left to play. The rookie right guard was drafted in the second round of the draft. Oh yeah, Trey Lance is in also.

12:07 This is where not having Elijah Mitchell makes things tough on Kyle Shanahan. You don’t want to burn out Jeff Wilson Jr or Deebo Samuel, but Trey Sermon doesn’t run well laterally. My suggestion is to put Lance in the game with Trey Sermon and run the heck out of the zone read to close this out.

11:57 Arden Key with the sack, his 3rd of the season, ends the Jaguars offensive possession. Kyle Shanahan should think about getting Trey Lance some action soon.

11:50 Jimmy Garoppolo to George Kittle caps off a 77-yard touchdown drive. The highlight of that possession was watching left tackle Trent Williams get a target in the end zone. 49ers 27 Jaguars 3

11:36 Quick three and out for the 49ers defense. Nice play by Josh Norman to force an incompletion on first down, followed by good recognition of a screen which led to an incompletion and then Lawrence throws incomplete while being pressured by Nick Bosa and Arden Key.

11:25 Jimmy Garoppolo finishes the first half 10-14, 128 yards and 1 touchdown. To of his incompletions were on passes he just threw it away.

Brandon Aiyuk leads 49ers receivers with 6 receptions for 78 yards on 6 targets and Deebo Samuel leads the 49ers rushing attack with 47 yards and a touchdown on 5 carries. Samuel does not have a target in the game.

11:20 49ers offense does a good job of moving into field goal range and working the clock to set up a 47-yard field goal by Robbie Gould. Key plays on the possession were two 9-yard completions to Brandon Aiyuk and then Garoppolo hit a wide open Trey Sermon for a gain of 23. 49ers 20 Jaguars 3

11:11 Jacksonville finally gets their offense going, moving the ball 67-yards on 12 plays before settling for a field goal. 49ers 17 Jaguars 3

Jaguars get the ball to start the second half, so this upcoming possession for San Francisco is important.

10:53 Garoppolo finds Brandon Aiyuk over the middle for the touchdown. 49ers 17 Jaguars 0

Nearly halfway through the first half and the 49ers have run 33 plays to only 4 for Jacksonville.

10:46 The fumble was forced by Josh Norman, something he’s done a very good job of this season, and recovered by Fred Warner.

10:41 On the Jaguars first offensive play Laviska Shenault Jr takes a screen from Trevor Lawrence for the biggest play of the day so far for Jacksonville only to fumble when he is hit. San Francisco recovers. This could be a blowout pretty quick.

10:39 Deebo Samuel caps a 7 play, 80-yard drive with a 25 yard touchdown run around the left side. Moving Samuel into more of a running back role may be what saves the 49ers season.

10:30 Jimmy Garoppolo finds Brandon Aiyuk across the middle off play action for a gain of 35 as the first quarter comes to a close.

10:26 San Francisco defense forces a quick 3 and out. On 3rd and 5 San Francisco went with man coverage across the field and Lawrence threw incomplete deep to John Brown who was covered by K’Waun Williams. Nice aggressive start by DeMeco Ryans.

10:21 49ers offense opens the game with a 20 play, 89 yard drive but settle for a FG. Jimmy Garoppolo missed Jeff Wilson Jr with a bad throw and then on 4th and 1 from the 2, Kyle Shanahan decides to settle for a field goal. That’s a win for Jacksonville. 49ers 3 Jaguars 0

10:10 Trent Williams stepped down, leaving Josh Allen unblocked for a sack. 49ers catch a big break with a holding call on the Jaguars secondary.

10:03 Kickoff returns are always an adventure with Trenton Cannon.

9:30 Expect Jaquiski Tartt to be back in the starting lineup at strong safety today with Talanoa Hufanga coming in as the third safety when Jimmie Ward is moved into the slot.

9:19 Elijah Mitchell is OUT for the 49ers today. Other inactives include JaMycal Hasty, Maurice Hurst, and Colton McKivitz.

This article has 30 Comments