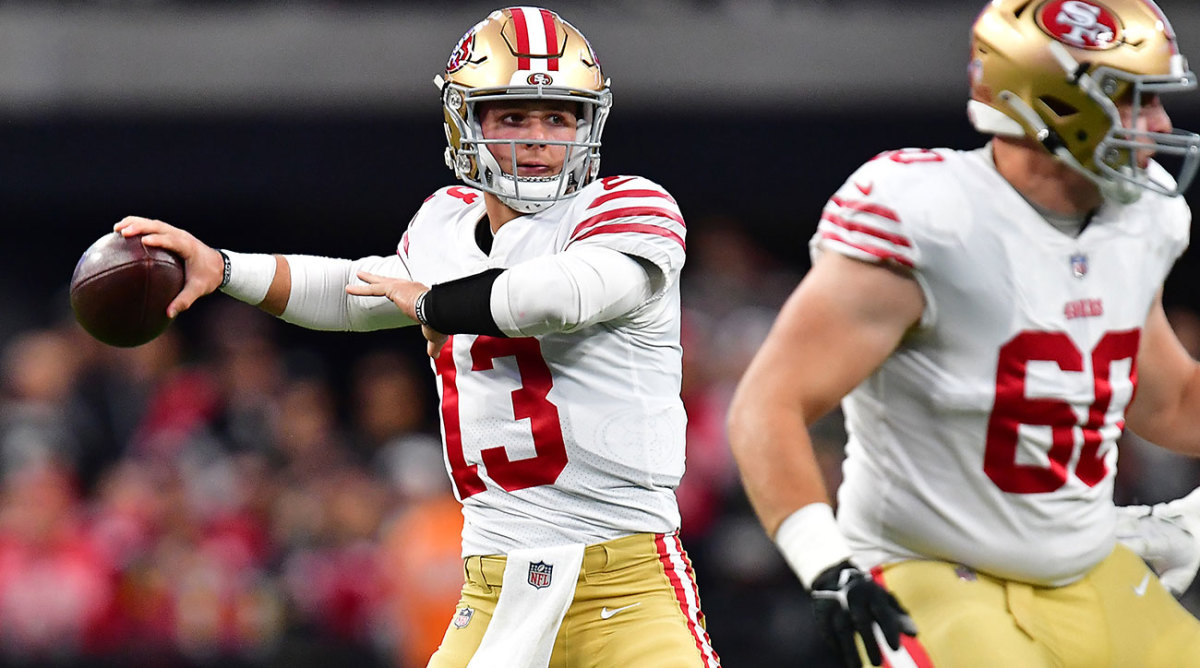 A ten-game win streak to finish the regular season is outstanding. Getting six of those wins with your third string quarterback is nearly unheard of.

The unbelievable performance of Brock Purdy, the final player taken in the draft has been one of the more amazing stories in the NFL this season. In fact, it’s been so good that I have limited this week’s mailbag to just one question.

Ryan Hensley, @ryanghensley– “Brock Purdy’s passing numbers are surprisingly similar to Jimmy Garoppolo’s, but the offense has been able to score more. What’s the difference?”

The addition of Christian McCaffrey jumpstarted the offense. In ten starts with the 49ers McCaffrey has averaged just under 114 yards and one touchdown per game.

With Garoppolo at quarterback and McCaffrey in the lineup the 49ers offense averaged 26 points per game. Meanwhile, Brock Purdy has led San Francisco to an average of 33.6.

Purdy has given the 49ers a more explosive passing game. The rookie quarterback has completed five of 12 pass attempts over 20 yards downfield, four of those going for touchdowns. That is much more efficient than Garoppolo who hit only eight of 28 deep throws with one touchdown.

The efficiency Purdy provides extends to the redzone. In this area of the field Purdy has completed 13 of 17 attempts, thrown six touchdown passes and ran for a score. That’s a touchdown on roughly 35 percent of Purdy’s attempts. Garoppolo was 26 of 43 with 12 touchdown throws and a pair of rushing scores, a touchdown percentage of 28.

San Francisco’s offensive explosion has also been aided by the defense and special teams. Of the 49ers 112 points scored over the last three weeks, 43 have come on drives of less than 35 yards following big plays by these two units.

The 49ers scored 20 points in the second half against Washington. On those four scoring drives the 49ers offense went 34, 6, 8 and 33 yards. The first touchdown came after the defense forced a turnover on downs. An interception and strip sack led to a pair of field goals before Washington’s onside kick attempt went sideways to give San Francisco possession at the Commanders 33.

Against Las Vegas two weeks ago San Francisco’s offense went up and down the field for most of the game. Still, the deciding factor in the 49ers come from behind win was a pair of interceptions. The first resulted in a game tying field goal. The second led to Robbie Gould’s game winner.

Against Arizona on Sunday the 49ers defense set the offense up inside the Cardinals 35 three times. Tashaun Gipson’s first interception put the ball at the Arizona 18. Elijah Mitchell scored his first touchdown of the game a few plays later. Gipson struck for his second interception to end Arizona’s first possession after halftime. His 23-yard return set the 49ers offense up at the Cardinals 28. Robbie Gould hit a field goal a few pays later. Arizona’s next possession ended when Jordan Willis sacked Cardinals quarterback David Blough, leading to a fumble recovery for Michael Dwumfour at the Arizona 28. Brock Purdy finished the possession off by hitting George Kittle for the touchdown and the rout was on.

As you can see, the 49ers success in recent weeks has been a testament to complementary football.

This article has 55 Comments