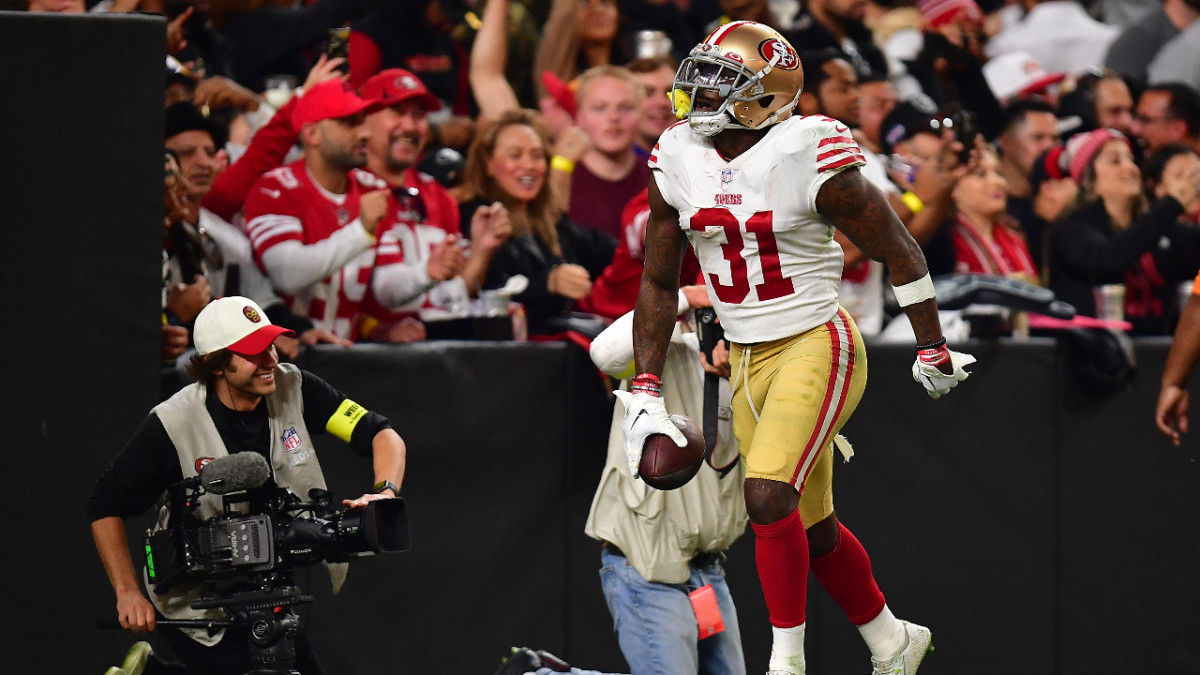 The San Francisco 49ers have won nine in a row for the first time since 1997. During their 37-34 win over Las Vegas the San Francisco defense wasn’t its normal self, leading several to question their play with the playoffs looming.

The rough patches overshadow that the 49ers defense came up with its ninth turnover on downs during the win streak, fourth inside their own ten. In addition, they forced two turnovers in the second half, bringing their total to 17 over the last nine games. Those turnovers turned into a game tying field goal and the game winning field goal.

There were some terrific topics brought up for this week’s mailbag including possible changes to the secondary, how injuries may impact the offensive line and potential playoff matchups.

Brian M, @AFNinerFan – “Do you think they should stick with Deommodore Lenoir or make a change to Janoris Jenkins or Ambry Thomas? Same with Talanoa Hufanga and George Odum”

This question makes sense considering Lenoir’s outing against Las Vegas where he allowed a passer rating of 113.69. The second-year corner struggled against Davante Adams and Darren Waller, two of the top players at their position in the NFL.

Lenoir had been playing well of late. Over the previous five weeks he had allowed a passer rating of just 57.78 and an average of 5.4 yards per pass attempt into his coverage.

During his press conference last Friday Kyle Shanahan said the 49ers are set with Lenoir as one of their starting cornerbacks but that Jenkins could move into the lineup.

I don’t expect to see that change occur this week. The 49ers have already used one of Jenkins’ three activations from the practice squad. If they make this move it will happen during the playoffs.

As for Talanoa Hufanga, he will remain as the starter. Although he gives up some big plays he comes up with several as well.

The 49ers will not bench Hufanga in favor of Odum. Instead, it would be to move Jimmie Ward back to safety. This would lead to Lenoir being moved back into the slot and Jenkins at corner. I find it hard to see them making wholesale changes to the back end of their secondary at this point in the season.

Frank Guzman, @fguz78 – “How scary will the 49ers offense be with Elijah Mitchell and Deebo Samuel returning for the playoffs? Do you expect rust?”

I don’t think the offense can be scarier than it already is. The additions of Mitchell and Samuel will allow the ball to be spread around a bit more. Also, Samuel impacts the defense even when he doesn’t touch the ball because defenses need to account for him.

With regards to rust, look at Mitchell’s performance against the Chargers. After missing seven games the running back gained 89 yards on 18 carries. If he’s healthy he provides a terrific one-two punch with Christian McCaffrey.

Jack Meyer, @jacktmeyer – “What is the long-term impact of losing Aaron Banks? How does the 49ers offensive line respond?”

The loss of Aaron Banks is another example of the tremendous depth the 49ers have created throughout their roster.

Daniel Brunskill started every game at right guard in 2021 and has been splitting time this year with rookie Spencer Burford. Brunskill was solid yesterday and there should be no change from what we’ve seen so far this season.

Brandon Matthews, @RCDiscussion – “What would you like to see scheduling wise for the playoffs? Would San Francisco benefit more from a Saturday Wild Card game so they go into the divisional round more rested?”

The best scenario for the 49ers is to get the top seed and avoid the Wild Card round all together which is still a possibility.

If they finish as the second seed a Saturday game could help, but there is no guarantee their game in the divisional round would be Sunday.

Sebastian Sheffield @sheffgoat24 – “What needs to happen for the 49ers to earn the number one seed in the NFC? Who would they face if they are number two or three?

The 49ers earn the number one seed in the NFC with a win over Arizona and a Philadelphia loss at home to the New York Giants.

New York is set as the six seed in the NFC. They will face whoever ends up as the third seed.

This article has 21 Comments