The San Francisco 49ers (4-4) will look to open the second half of their season strong when they take on the Los Angeles Chargers (5-3) Sunday night at Levi’s Stadium.

San Francisco comes into Sunday as the seventh seed in the NFC playoff race and finds themselves needing a win to keep pace with division leader Seattle. They have struggled coming out of the BYE under Kyle Shanahan, managing a record of only 2-3.

The Niners will have several players returning to action after getting healthy during the BYE week which could help turn their fortunes around. Deebo Samuel, Kyle Juszczyk, Jauan Jennings, Dre Greenlaw, Elijah Mitchell, Azeez Al-Shaair, Jordan Willis and Colton McKivitz will all be available.

Here are my five questions to watch out for on Sunday night.

1.) Will Jimmy Garoppolo keep up the strong play? 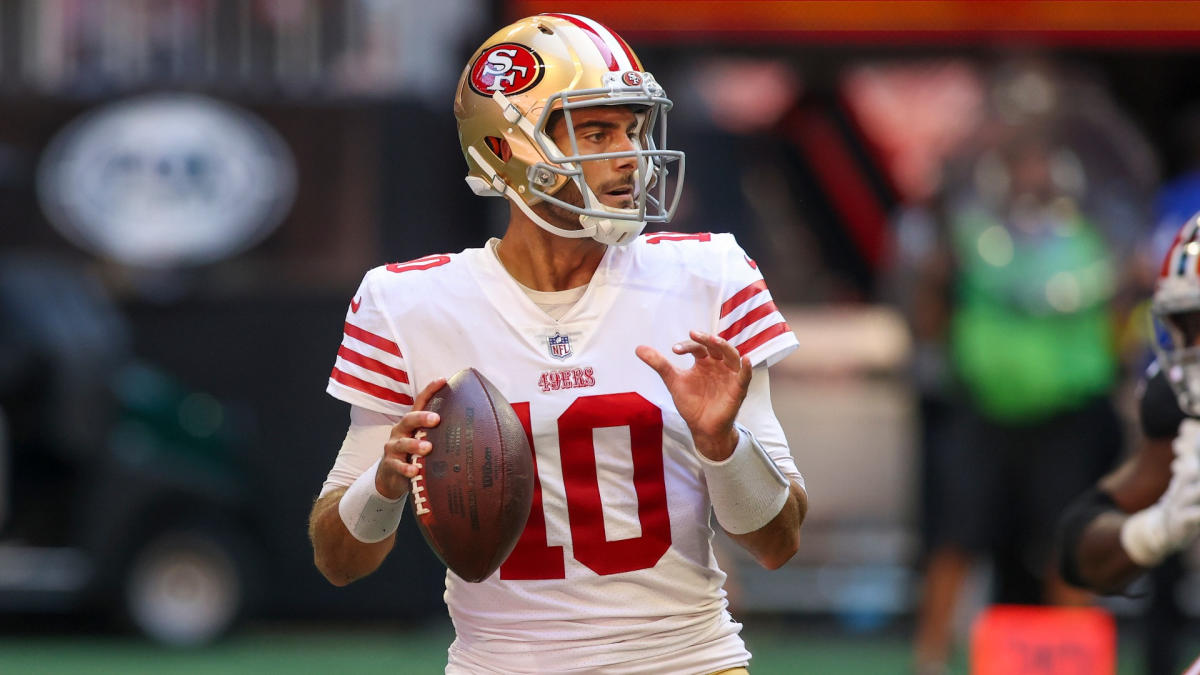 Jimmy Garoppolo has been solid in his recent outings. Garoppolo has gone over 230 yards passing with at least two touchdowns in each of the 49ers last four games. This marks the longest such streak by a San Francisco quarterback since Jeff Garcia pulled it off over five-consecutive weeks in 2001.

In addition, Garoppolo currently ranks fifth in the NFL with 7.16 net yards per pass attempt. His passer rating of 100.7 is sixth best.

On Sunday, Garoppolo will face a Chargers defense which has allowed only 6 net yards per attempt, eleventh best in the NFL.

The matchup between Mack and San Francisco right tackle Mike McGlinchey will be one to keep an eye on.

2.) How will the 49ers offense look with Christian McCaffrey and Deebo Samuel both active?

Sunday night will give us the first true glimpse of that the 49ers offense will look like with Christian McCaffrey and Deebo Samuel both healthy.

Sure, we saw the two of them together against Kansas City, but McCaffrey had just arrived in Santa Clara two days prior to kickoff.

This time around Kyle Shanahan will have spent two weeks putting his plan together.

“It’s just a matchup nightmare for defenses, it’s pick your poison type of thing,” said Jimmy Garoppolo when asked about having the two together on Sunday night. “So, it’s my job to get those guys the ball in space, let them go run and be the special players that they are, but yeah, it’s been fun so far.”

We saw flashes of this with McCaffrey and George Kittle against the Rams two weeks ago. With the offense back at full strength it will be fascinating to see what Shanahan can pull off.

Samuel comes into Sunday’s contest needed just one catch and fifteen receiving yards to reach 200 career receptions and 3,000 receiving yards. If he can get those numbers on Sunday night, Samuel would hit those totals in just 46 career games. Only Jerry Rice (38 games) and Vic Washington (44 games) have done so in fewer contests.

3.) What will Elijah Mitchell’s role be?

San Francisco will have the services of Elijah Mitchell on Sunday night. The running back has been out since injuring his knee against Chicago in week 1.

Mitchell looked more explosive than he had during his rookie campaign picking up 41 yards on only six carries before leaving the game early in the second quarter.

With Jeff Wilson Jr. now a member of the Miami Dolphins it is likely we see Mitchell as the tough inside runner who can grind out yards and give McCaffrey a rest.

The 49ers defense was dealt a blow on Wednesday when Jason Verrett suffered a season ending achilles tear.

Although Verrett had not played a snap since week one of last season, San Francisco was hoping to get a lift from his presence in the secondary.

Now the 49ers will go back to what they have been doing since Emmanuel Moseley went down for the season with a torn ACL.

Expect to see Deommodore Lenoir on the outside opposite Charvarius Ward. The question becomes, what the team will do with Jimmie Ward.

Tashaun Gipson and Talanoa Hufanga played very well together over the first half of the season. This development led to DeMeco Ryans moving Jimmie Ward down to the slot.

While Ward is very good inside when covering tight ends and running backs, he has struggled when forced to match up against speedy wide receivers.

This week the challenge will be to slow down Justin Herbert.

Now in his third season, Herbert has seen a drop off in touchdowns and yards per attempt. One explanation for the downturn is the loss of Keenan Allen for all but two games. Allen and Mike Williams, two of Herbert’s top receiving threats will be out for Sunday due to injuries.

Without Allen and Williams, Just Herbert’s average depth of target drops to only 5.3 yards per pass attempt.

Josh Palmer, DeAndre Carter and Gerald Everett will be the top wide outs and tight end for Herbert on Sunday.

Carter is the depth threat of the group with Palmer and Everett working underneath. This is a matchup that favors San Francisco.

One issue for the Niners might be their pass rush. Samson Ebukam injured his quad during practice on Monday and has been listed as doubtful.

Options to replace Ebukam are Charles Omenihu and rookie Drake Jackson. Omenihu and Jackson each have recorded three sacks this season.

Another option will be Jordan Willis. Kyle Shanahan told the media on Friday that San Francisco will activate the defensive end from injured reserve.

The running back leads Los Angeles with 60 receptions for 381 yards and four touchdowns. His ability to make plays in the passing game will put pressure on Fred Warner and the rest of the 49ers linebackers in coverage.

While his receiving ability has caused problems this season, Ekeler has not been nearly as strong in the running game.

Aside from a breakout performance against Cleveland in week five, Ekeler has only averaged 3.1 yards per rush attempt this season.

The key for San Francisco is to keep Ekeler in front of them. If they can do this on Sunday night Los Angeles will have a hard time generating many points.

This article has 18 Comments