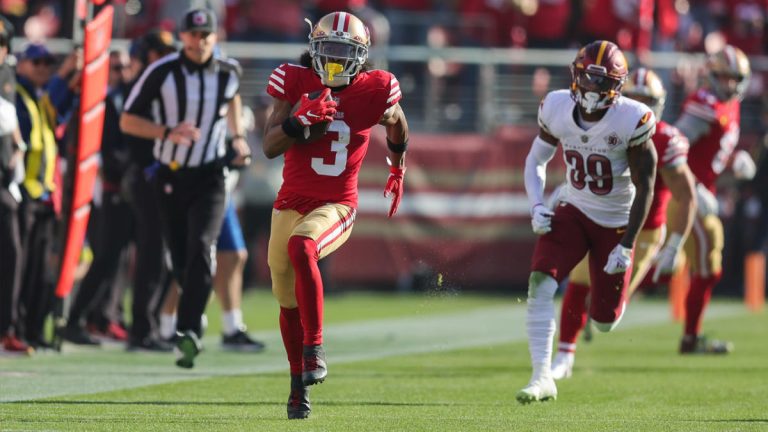 The 49ers finished the 2022 regular season on a ten game winning streak, the longest the franchise has seen since 1997. Their 13-4 record marks the third time they have won at least 10 games under the guidance of Kyle Shanahan and John Lynch.

With the playoffs starting on Saturday, here are five reasons they find themselves among the favorites to reach the Super Bowl.

Changes along the offensive line were a major concern during the offseason, leading some to predict it would be the teams undoing.

Gone were Laken Tomlinson and Alex Mack, and Mike McGlinchey was coming back from a torn quad tendon.

Instead of going after the big-name free agents or drafting a replacement in the early rounds, San Francisco stuck with Aaron Banks at left guard and Jake Brendel at center. In the fourth round they selected Spencer Burford, a tackle from UTSA.

Not since Fred Dean in 1981 has a midseason trade worked out as well as the one that brought McCaffrey to San Francisco.

Since moving into the starting lineup in week eight, McCaffrey has averaged 113.8 total yards and one touchdown per game.

McCaffrey’s addition has played a large role in the success of the quarterback position during their current win streak. No longer do the quarterbacks need to force the ball down field. Instead, they can check the ball down to the running back and let him move the sticks.

Charvarius Ward was the lone splash signing for the 49ers during free agency. The cornerback hasn’t disappointed, allowing only three touchdowns and a passer rating of 82.4. Ward has allowed more than 50 yards receiving just three times this season and led the team with 11 passes defensed.

When Jimmie Ward went down with a hamstring injury it became a blessing in disguise.

The injury to Ward prompted the 49ers to sign veteran Tashaun Gipson. The training camp addition led the team in interceptions during the regular season with five. In fact, Gipson played so well that when Ward was ready to return the team stuck with Gipson as the starter.

With safety positions playing well the 49ers were able to move Ward to the slot, a position he had not played in several years. This move solidified a position which had been a weak point in the early going. Ward finished the regular season with a career-high three interceptions while allowing over 46 yards receiving just once.

Where will the 49ers trade Jimmy Garoppolo? That was one of the most talked about topics around the 49ers throughout the offseason.

Unable to find a trade partner, the team and Garoppolo agreed on a reworked deal to keep the quarterback in San Francisco as the backup. This move paid off when Trey Lance went down late in the first quarter against Seattle in week two.

Garoppolo led the 49ers to a 7-3 record and was having one of his best seasons before going down with an injury against Miami.

With the season seemingly in the balance, Brock Purdy stepped in, and the offense didn’t miss a beat.

Taken with the final pick in the draft, many were unsure if Purdy would even make the roster out of training camp. Despite solid play during camp and preseason the general belief was San Francisco would keep Nate Sudfeld around after giving him $2 million guaranteed in the offseason.

Purdy has checked every box, throwing at least two touchdown passes in each game while leading San Francisco to an average of more than 30 points per game.

San Francisco made improving special teams a priority during free agency with the signings of Oren Burks, George Odum and Ray-Ray McCloud. It worked.

Odum led the NFL in special teams tackles with 21 and McCloud finished with 356 punt return yards, second best in the NFL. This helped the 49ers have the best starting field position both offensively and defensively in the league.

This article has 7 Comments