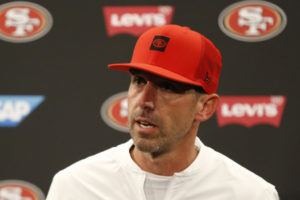 Kyle Shanahan doesn’t do in-person press conferences now. But in a virtual session with reporters last week he made strong statements about racial unrest in the United States. (AP Photo/Josie Lepe)

I don’t think we have talked enough about Kyle Shanahan’s press conference.

You probably heard about it. Appearing on-screen in a virtual presser with beat reporters last week, Shanahan stepped right into questions about the #Blacklivesmatter protests. And he left no doubt about where he stood.

“Racism is a big deal in our country now,” he said. “That’s a fact. It is not debatable.”

You knew he was going to say something of course. First, the question was bound to come up when he met the beat reporters. (In fact, it was the first one.)

And second, at this point, almost every team is making a point to get on record with some comment on the unrest. In fact, a Tuesday morning news report called out the five “major sports teams” who had not issued a statement.

But this wasn’t a crafted, boilerplate, one-paragraph press release; the kind of thing a team would send out to make sure they were covered.

Shanahan appeared in his now-trademark flat bill cap and a bushy expanse of facial hair that would make any hipster jealous. He was clearly fired up and had given the topic lots of thought.

Asked about the protests, Shanahan went a good five minutes in his first reply and didn’t stop there. He spoke for a full 17 minutes before answering a football query. The discussion was so engrossing that no one thought to ask a Jimmy Garoppolo question until 20 minutes into the 30-minute interview.

Now, we can debate the opinions and assumptions made by Shanahan at some point. (And from what I’ve seen of this group, that is definitely going to happen.)

But from a 49ers standpoint, don’t miss the significance. At least in that press conference, Shanahan was stepping into Steve Kerr and Gregg Popovich territory. The two outspoken basketball coaches have made a point to speak up on national issues, including politics.

Popovich released a video last week on the Spurs social media outlet, saying he was “embarrassed” to watch the video of George Floyd dying under the knee of a Minneapolis police officer.

Kerr is more likely to use humor. This morning he highlighted a Tweet saying President Trump was considering “a speech to the nation on race and unity.” Kerr’s response: “HAHAHAHAHAHAHAHAHA!!!!!!!!!!”

So is Shanahan stepping up to join the new world order of coaches, who are not only paying attention to current events but have opinions?

You know, it wasn’t long ago that coaches seemed perversely proud of their ignorance of the events of the day. They told us they were too busy sleeping on a cot in their office and studying film to comment.

So to be clear, I fully support Shanahan making his opinions known. Good for him.

I would just say to be very, very careful about the words you use. Words and phrases have never been more fraught.

Perhaps you heard about the Sacramento Kings announcer Grant Napear, who was fired from his job last week. Napear responded to a Tweet by former Kings (and Warriors) center DeMarcus Cousins, asking what he thought of “black lives matter.”

Napear replied “All lives matter . . . Every single one.”

Which, surely, almost everyone knows is a bitter trigger to #blacklivesmatter supporters. They see it as diminishing and minimizing their message. It makes them angry.

Napear insists he didn’t know the controversy, which is hard to imagine, frankly. But if that was true, I guess it is possible to imagine someone cluelessly thinking, “What’s wrong with saying all lives matter?”

It’s very tricky. You may have seen the story about the editor at the Philadelphia Inquirer who resigned after his section ran an architectural story with the headline, “Buildings Matter, Too.” Outrage followed, including from black staffers.

The headline was dumb and tone-deaf. But you can picture someone trying to think of a clever headline and believing they had come up with something topical. That’s when somebody should have stopped them, stepped back, and said, “Wait, how is this going to sound, given the current cultural climate?”

That said, let’s not go off on a “keep politics out of sports” tangent. Politics have always been part of sports. I’m old enough to remember interviewing baseball players on the Vietnam War.

As for racial tension and sports, I would submit they are the perfect intersection to have that conversation. In fact, I’d say sports are where most Americans work out their feelings about race. The most popular sport in the country is professional football and two-thirds of NFL players are black.

On the field, floor, or ice, teams are remarkably merit-based.  If you can play, you play. Or coach.

And, before the quarantine, teams like the 49ers brought people of all races together, both in stadiums and in cities and neighborhoods. People of every background and ethnicity were united in their support of a cause — their football team.

And if the head coach wants to step up and voice his opinions in public, there can be only one response.

Welcome to the fray.

This article has 410 Comments