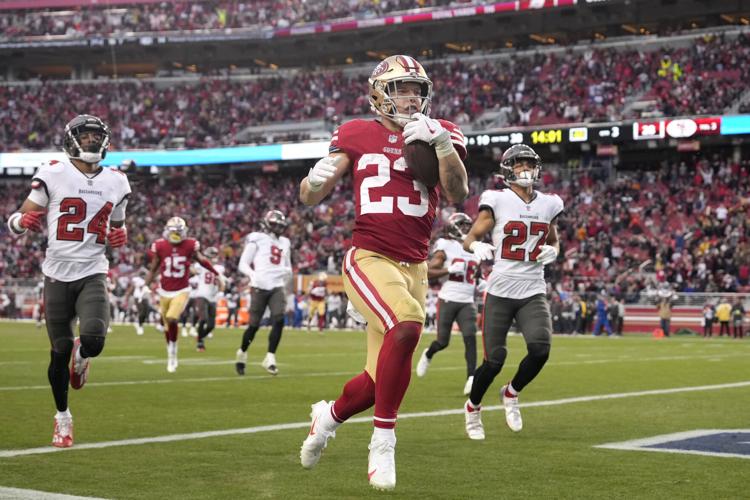 The 49ers 41-23 win over Seattle on Saturday afternoon sent them to the NFC Divisional round. San Francisco will face the winner of tonight’s game between Tampa Bay and Dallas next Sunday at Levi’s Stadium.

Here is a quick look at the potential matchups:

San Francisco blew out the Buccaneers at Levi’s Stadium in week 14. Tampa Bay was playing without both of its starting safeties, Vita Vea, and right tackle Tristan Wirfs.

Tom Brady has been sacked on only 2.99% of his drop backs this season. The veteran’s quick release helping his offensive line out.

While Brady is still able to make every throw, the Buccaneers lean too heavily on the veteran quarterback. Tampa Bay finished the regular season with the most pass attempts in the league and the fewest rushing attempts.

Tampa Bay’s defense is one of the tougher matchups in the league when healthy. They have allowed the fifth lowest net yards per pass this year.

Tony Pollard and Ezekiel Elliott force opponents to focus on the run. The combo allows Dallas to stick with the running game, a big reason why they have the fifth most attempts this year.

Pollard and Elliott create opportunities in the passing game off play action for CeeDee Lamb and tight end Dalton Schultz.

Dak Prescott has struggled with turnovers recently, but his mobility could cause trouble for the 49ers defense.

Dallas has recorded 51 sacks this season and forced a league high 32 turnovers. They are second in the league with 28.8 points scored per game while allowing only 19.8.

Both Tampa Bay and Dallas have strong defenses, the difference between the two is on offense.

San Francisco has struggled this season with offenses which can stay committed to the run and make throws off play action. This is why 49ers fans should be cheering for Tampa Bay tonight.

Although they have Brady and a solid defense Tampa Bay’s lack of a consistent running game plays into the strength of the 49ers defense. Without needing to worry about stopping the run, Nick Bosa and the rest of San Francisco’s defense can focus on getting after Brady and taking away the passing game.

This article has 36 Comments