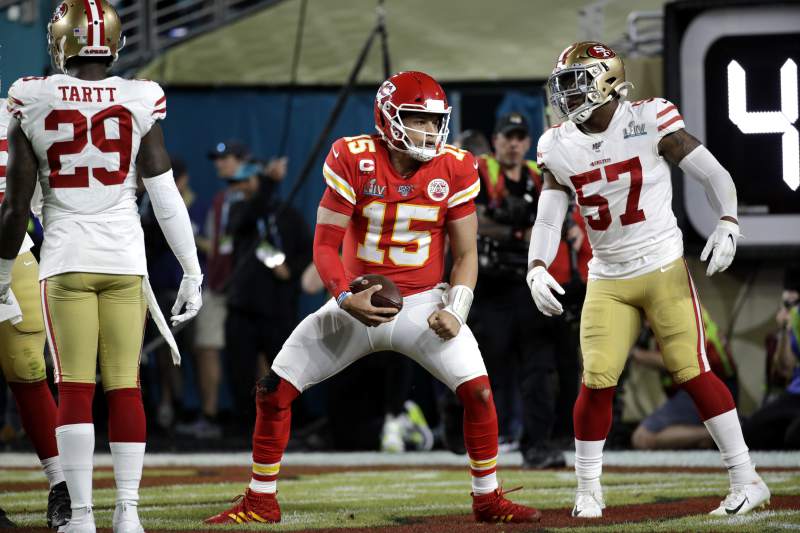 GAROPPOLO: D. He had an opportunity to prove he’s not a game manager, an opportunity to lead a game-winning fourth-quarter drive in the Super Bowl and put himself in the conversation with Joe Montana and Steve Young. But Garoppolo failed. With the game on the line, he overthrew a deep pass to Emmanuel Sanders, who was open. Overthrew him by a cool five yards. Garoppolo finished with two picks and a 69.2 quarterback rating. He may become an elite quarterback one day, but he has a long way to go.

RUNNING BACKS: A. Jeff Wilson Jr. made a 20-yard catch, Kyle Juszczyk caught a touchdown pass and Raheem Mostert and Tevin Coleman combined to rush 17 times for 86 yards — 5.1 yards per carry. Mostert also scored a touchdown. These three should have touched the ball much more than they did.

WIDE RECEIVERS: A. Deebo Samuel had 39 receiving yards and 53 rushing yards — a new record for a wide receiver in a Super Bowl. Kendrick Bourne also caught a 26-yard pass on third down, and Emmanuel Sanders might have caught a deep touchdown pass on third down to win the game, but Garoppolo overthrew him.

TIGHT ENDS: B. George Kittle made a beautiful deep catch at the end of the first half, but the officials flagged him for offensive pass interference. He finished with four catches for 36 yards.

OFFENSIVE LINE: A-MINUS. They blocked well in the run game and gave up only one sack, but Joe Staley committed a crucial false start in the second — an uncharacteristic mistake for a player of his experience and quality.

DEFENSIVE LINE: A-MINUS. They controlled the game for 54 minutes. The pass rush generated consistent pressure, flushed Patrick Mahomes out of the pocket and destroyed the continuity of the Chiefs’ passing game, until the defense got tired. Then the pass rush disappeared, and Nick Bosa gave up a 38-yard touchdown run to Damien Williams.

LINEBACKERS: A. Fred Warner intercepted Mahomes and recorded seven tackles. Warner rose to the occasion. Kwon Alexander did not — he recorded only one tackle. Will the 49ers bring Alexander back next season? He’s expensive, and Dre Greenlaw might be better than him.

DEFENSIVE BACKS: C. They played well until the final six minutes of the game. Then they gave up a long catch to Tyreek Hill. Backup safety Tarvarius Moore also committed a pass interference penalty in the end zone which led to a touchdown. And Richard Sherman got burned in man to man coverage by Sammy Watkins for a 38-yard catch. Two weeks ago, Packers wide receiver Davante Adams did the same thing to Sherman, but people overlooked that play because the 49ers won. The Chiefs didn’t overlook it. They attacked Sherman, whose legs are gone. The 49ers should draft a corner in the first round of the draft this year.

SPECIAL TEAMS: C. Richie James Jr. fumbled a punt and spent the rest of the game trying to make up his mistake. He kept running kickoffs out of the end zone for minimal gains. He did not rise to the occasion. Robbie Gould did, though. He made both of his field-goal attempts.

COACHES: D. Robert Saleh’s defense played historically well for the first three-and-a-half quarters until it got tired. That’s when it started giving up big plays. Saleh should not have asked Sherman to cover Watkins man to man, because Sherman is a pure zone corner who doesn’t run well enough to cover wide receivers man to man anymore. But this loss falls on the head coach, Kyle Shanahan. He evolved and improved this season, and yet he still can’t manage the clock in big games. Only three teams in NFL history ever have lost a Super Bowl when leading by 10 points in the fourth quarter, and Shanahan called the offensive plays for two of them. He’s beginning to seem like a high-level loser — someone who beats the competition all season until he finally beats himself. He is his own nemesis. These two Super Bowl collapses will define him until he wins a championship. Cruel, but that’s life.

This article has 51 Comments