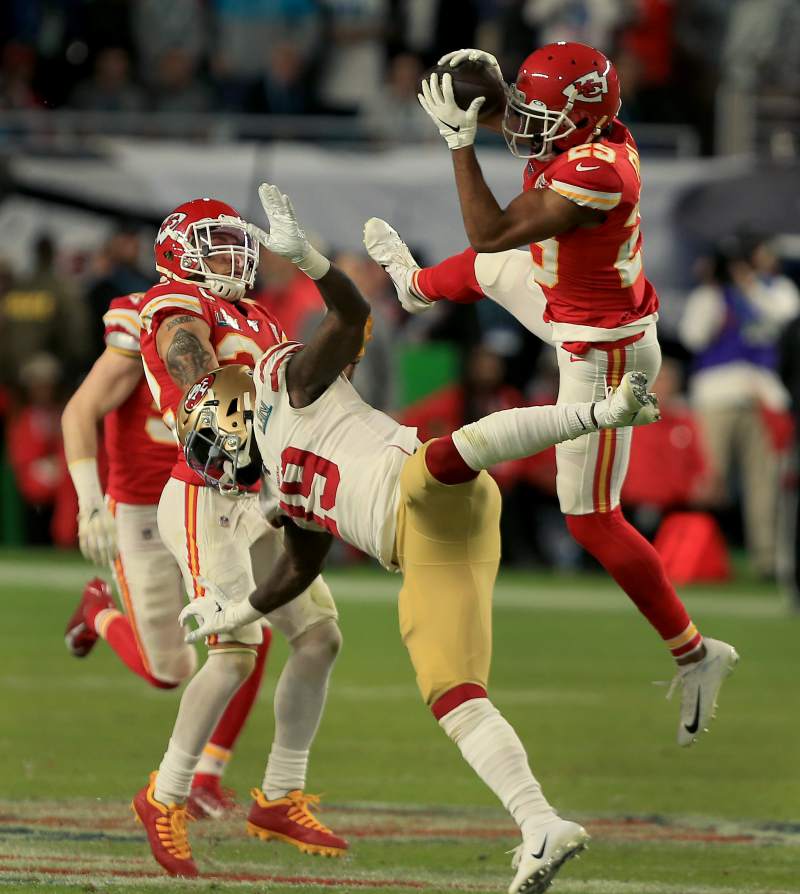 They had a 10-point lead with 6:23 left in the fourth quarter of Super Bowl LIV and collapsed, lost 31-20 to the Chiefs. Controlled the game for 54 minutes and still lost by 11 points.

What a brutal way to end a magical season in which the 49ers never lost by more than three points until the Super Bowl.

“They were better than us today,” head coach Kyle Shanahan said of the Chiefs.

Except, the Chiefs weren’t better than the 49ers Sunday night. The 49ers beat themselves. They averaged a whopping 6.4 yards per carry, and still lost. Intercepted Chiefs quarterback Patrick Mahomes twice, and still lost.

The shocking collapse began in the fourth quarter, but something strange happened at the end of the first half that foreshadowed the ending. With 1:53 remaining in the second quarter and the score tied at 10, the 49ers defense stopped the Chiefs on third and 14, but Shanahan didn’t use any of his three timeouts. He let the clock run down.

After a punt, the 49ers got the ball back, and Shanahan called a run on first down, but didn’t use a timeout after this play, either. He let the clock run down some more. Television cameras caught general manager John Lynch desperately signaling for a timeout from a luxury suite. Shanahan’s ultra-conservative play-calling led to no points for the 49ers on their final drive of the first half.

“We were good with that situation,” Shanahan said. “We would do that every single time.”

The 49ers got the ball to start the second half and drove for a field goal. They led 13-10. Then the Chiefs got the ball, and 49ers linebacker Fred Warner intercepted Patrick Mahomes. The 49ers got the ball back, and this time drove 55 yards for a touchdown — running back Raheem Mostert ran the ball into the end zone from 1 yard out, and the 49ers led 20-10.

Next series, the 49ers picked off Mahomes again — backup safety Tarvarius Moore intercepted him with 12:05 left. And the game seemed over. The 49ers defense had played well enough to win — it simply needed the offense to run the ball, take time off the clock and close out the game.

With the season on the line, Shanahan forgot about the running game, which carried the 49ers to the Super Bowl in the first place. On second and 9 with 9:52 left, he called a pass instead of a run that would have used up time. The pass fell incomplete, the clock stopped and the 49ers punted two plays later.

“We just do what we do,” Shanahan explained. “We tried to run the ball.”

At this point, the 49ers defense was getting exhausted. It had played well most of the game, but the 49ers offense couldn’t stay on the field, so the defense wore down. It gave up a 44-yard catch to wide receiver Tyreek Hill, who was wide open. No one covered him. The Chiefs scored a touchdown three plays later when Mahomes completed a 1-yard pass to tight end Travis Kelce, and the score was 20-17 49ers.

The 49ers offense had another opportunity to close out the game, but Shanahan made the same mistake as before. Called a pass instead of a run on second and 5 with 5:27 left. The pass fell incomplete, the 49ers went three-and-out and the Chiefs got the ball back.

And with 3:44 left, All-Pro cornerback Richard Sherman gave up a 38-yard catch to Sammy Watkins, who simply ran right by Sherman.

“He made a play,” said Sherman, who didn’t have much to say.

Three plays later, Mahomes threw a 5-yard touchdown pass to running back Damien Williams, and the Chiefs took a 24-20 lead.

But Garoppolo choked, too. On third and 10 with 1:40 left, he threw a deep pass to Emmanuel Sanders, who was open near the end zone. Garoppolo had a clean pocket, made the right read and threw the ball on time. It seemed the 49ers would win after all.

But his pass bounced 5 yards in front of Sanders. Wasn’t even close.

“We missed some shots tonight, just some plays that we usually make,” Garoppolo said.

Next play, Chiefs defensive end Frank Clark sacked Garoppolo, who spun around and chucked the ball with two hands to no one before going down. And the collapse was complete. The Chiefs scored another touchdown and Garoppolo threw another interception for good measure. He finished with 219 passing yards, one touchdown, two picks and just a 69.2 quarterback rating.

Not exactly Montana or Young.

After the game, left tackle Joe Staley sat at a podium looking crushed.

“I’m sorry,” he said to the media. “This is very hard being in this moment right now. You put your heart and soul and your whole life into trying to be a Super Bowl champion, and you get toward the end of your career and your realize how rare these opportunities are. The emotions are all still raw and real for me right now. I’m trying to answer questions, and I’m sorry that I’m not …”

Staley’s voice caught. “Put yourself in my shoes for a second,” he continued. “It’s tough.”

The 49ers are a fantastic team that had quite a journey this season and may even return to the Super Bowl next year — they’re that good.

But none of that matters now. They choked.

This article has 204 Comments