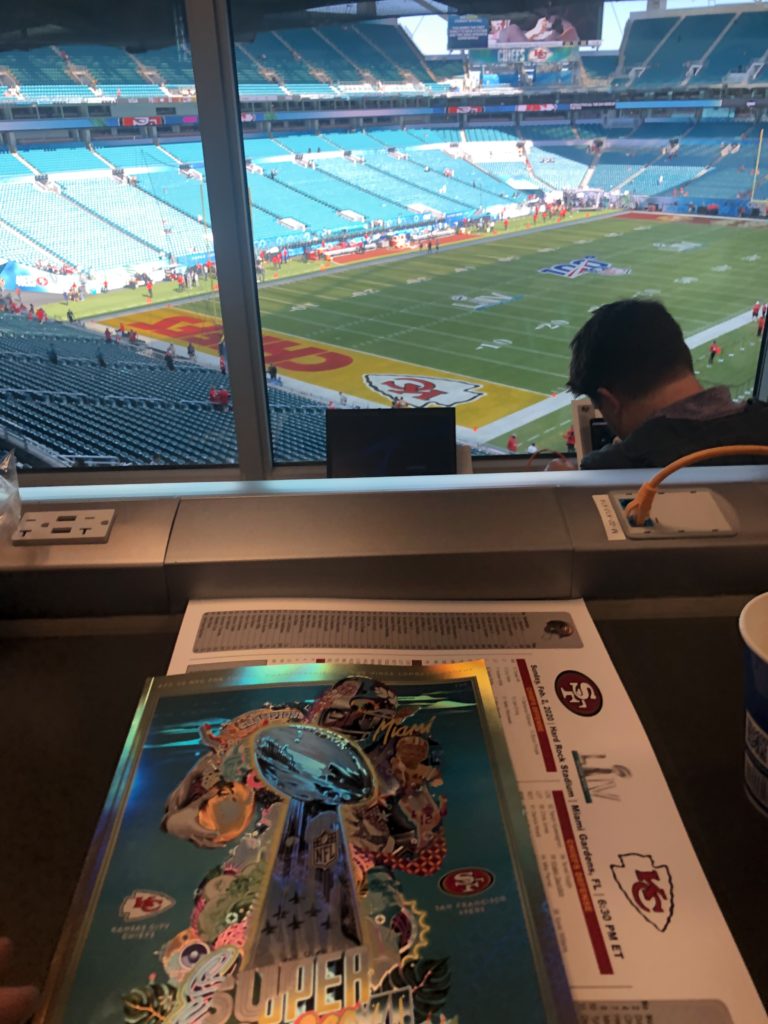 MIAMI — This is the live blog for Super Bowl LIV between the 49ers and the Chiefs. I will update this frequently with information and analysis from the press box.

3:34 The 49ers win the toss and defer. The Chiefs will receive the opening kickoff.

3:43 On third and 3 from the Chiefs 33, Patrick Mahomes throws an incomplete pass intended for running back Damien Williams in the flat. The Chiefs go three and out and punt.

3:52 On third and five from the Chiefs 25, Chiefs defensive tackle Mike Pennel tips Jimmy Garoppolo’s pass and it falls incomplete. Robbie Gould makes a 38-yard field goal, and the 49ers lead 3-0. Deebo Samuel ran two end arounds and gained 39 yards during that drive. The end around to Samuel has been the 49ers’ best offensive play the past couple months. Interesting to see Shanahan call two of them in the opening drive.

3:57 The Chiefs double-covered Kittle on third and five and Garoppolo threw it to him anyway. Gotta look somewhere else.

4:10 On third and 11 from the 49ers’ 15, Patrick Mahomes scrambles from 14 yards, but Jimmie Ward hits him and forces a fumble. The ball bounces backward to the five-yard line. On fourth and 1, Andy Reid calls a direct snap to running back Damien Williams, who runs for four yards. Two plays later, Reid calls a classic option play, Mahomes fakes a pitch to Williams, fakes out Jasquiski Tartt and scores a touchdown. The Chiefs lead 7-3.

4:20 On second and 12 from the 49ers’ Garoppolo takes a hit as he throws an interception to Chiefs cornerback Bashaud Breeland. The Chiefs have the ball at their 45.

4:29 On third and 7 from the 49ers 13, Tarvarius Moore breaks up a short pass intended for Darwin Thompson. Harrison Butker makes a 31-yard field goal, and the Chiefs lead 10-3.

4:38 On first and 10 from the Chiefs 15, Garoppolo fakes a handoff, rolls to his right and completes a short pass to Kyle Juszczyk, who breaks a tackle from safety Daniel Sorensen and scores a touchdown. Game tied at 10.

4:50 On third and 14 from the Chiefs 52, Mahomes completes a screen pass to Williams for just one yard. Jaquiski Tartt makes the tackle. The Chiefs punt. Touchback. Niners get the ball with 59 seconds left. The 49ers would have 1:39 left had Kyle Shanahan taken a timeout after Tartt’s tackle, but Shanahan did not take a timeout. The 49ers have all three remaining.

5:00 On first and 10 from the 49ers 45, Garoppolo completes a beautiful deep pass to Kittle, but the refs flag Kittle for offensive pass interference. Next play, Garoppolo takes a knee and the first half ends.

5:42 On third and five from the Chiefs 27, Garoppolo completes a three-yard pass to Tevin Coleman. On fourth down, Robbie Gould makes a 42-yard field goal, and the 49ers lead 13-10.

5:50 On second and 5 from the Chiefs 46, Nick Bosa strips the ball from Mahomes but Mahomes recovers. Next play, Mahomes throws a pick directly to Fred Warner. Niners get the ball at their 45.

5:51 Joe Staley has a hand injury and is questionable to return. Justin Skule is playing left tackle.

5:57 On third and 8 from the Chiefs 37, Garoppolo completes a 26-yard pass to Kendrick Bourne. Two plays later, Mostert scores a one-yard touchdown run, and the 49ers lead 20-10.

6:06 On third and 1 from the Chiefs 44, Travis Kelce takes a direct snap and runs for two yards. The Chiefs will face first and 10 from their 46 when the fourth quarter starts.

6:14 On third and 6 from the 49ers’ 23, Tarvarius Moore intercepts Mahomes at the 49ers’ 20-yard line. The 49ers’ pass rush forced that throw into coverage. The pass rush has taken over and destroyed the continuity of the Chiefs’ passing game.

6:34 On third and 15 from the Chiefs’ 35, the 49ers give up a 44-yard catch to a wide open Tyreek Hill. Three plays later on third and 10, Tarvarius Moore commits defensive pass interference in the end zone during a pass intended for Travis Kelce. Next play, Mahomes completes a one-yard touchdown pass to Kelce, and the Chiefs trail 20-17 with 6:13 left.

6:41 On third and five from the 49ers’ 25, Garoppolo throws an incomplete pass intended for Kendrick Bourne, who wasn’t open. Kittle was open over the middle. Mitch Wishnowsky’s punt travels only 40 yards, and the Chiefs get the ball at their 35.

6:46 On second and 7 from the 49ers’ 48, Richard Sherman gives up a 38-yard catch to Sammy Watkins. On third and goal, Mahomes completes a five-yard TD pass to Damien Williams. The play is under review.

7:01 On second and 6, Damien Williams runs for a 38-yard touchdown, and the Chiefs lead 31-20. I correctly predicted the game and the Chiefs’ score. Currently accepting all apologies.

7:07 On second and 10 from the 49ers’ 25, Garoppolo throws another pick, and the 49ers lose the Super Bowl. Stay tuned for my game story and report card.

This article has 286 Comments