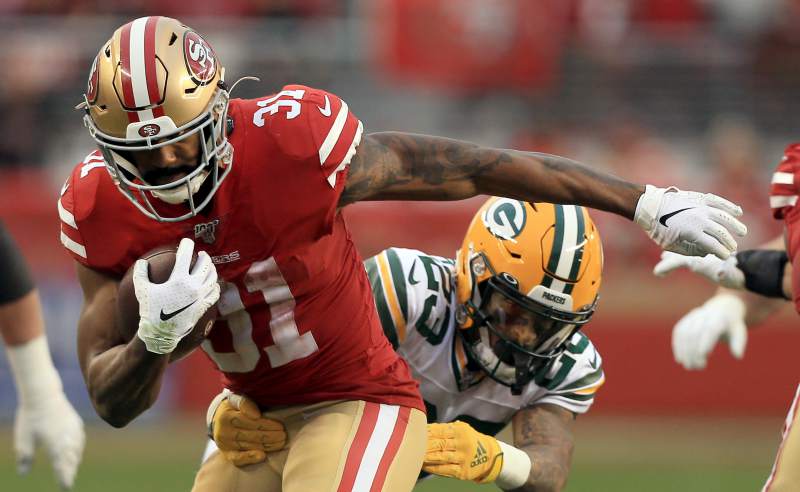 SANTA CLARA — The 49ers blew out the Packers 37-20 in the NFC championship game. Here are the 49ers’ grades:

GAROPPOLO: B. He completed only six passes, but he didn’t need to complete more than six to beat the Packers, who looked like they’d never before defended a run play. All Garoppolo needed to do was protect the ball, not turn it over, and he accomplished that. He’ll need to do much more to beat the Chiefs in the Super Bowl, but we’re not quite there yet.

RUNNING BACKS: A-PLUS. Kyle Juszczyk made any number of perfect blocks. He’s one of the 49ers’ most valuable players. Tevin Coleman started and averaged only 3.5 yards per carry before leaving on a cart with a shoulder injury. After he left, Raheem Mostert became the primary running back, a role he should have had all season. He showed why against the Packers. Mostert ran a whopping 29 times for 220 yards and four touchdowns. The 49ers might be undefeated had they featured Mostert during the regular season the way they featured him against the Packers. They absolutely should feature him in the Super Bowl.

WIDE RECEIVERS: B. Deebo Samuel gained 89 yards from scrimmage — 46 yards through the air and 43 on the ground. What a rookie. What a player. He was the 49ers’ second-most-dangerous weapon after Mostert. Kendrick Bourne had one catch for six yards. Emmanuel Sanders had zero catches. He has become a complete afterthought. The 49ers might not re-sign him this offseason.

TIGHT ENDS: A-PLUS. George Kittle caught just one pass for 19 yards, but he arguably was the most valuable player of the game, because his blocks created Mostert’s running lanes. Kittle is a better blocker than a receiver, and he’s an elite receiver. What a special player.

OFFENSIVE LINE: A-PLUS. They gave up only one sack, and paved the way for 285 rushing yards. Congratulations to Joe Staley for making it back to the Super Bowl after wasting years of his career on terrible teams. He deserves this win as much as anyone.

DEFENSIVE LINE: B. Nick Bosa and Arik Armstead each sacked Aaron Rodgers once, and Armstead stripped the ball from him. The pass rush in general made Rodgers look old and defeated in the first half. But the defensive line gave up 4.7 yards per carry to Packers starting running back Aaron Jones. The run defense might have been an issue had the game been closer.

LINEBACKERS: B. Dre Greenlaw and Fred Warner each had six tackles, and Warner broke up a deep pass intended for Packers tight end Jimmy Graham. Kwon Alexander played strong-side linebacker and two tackles, including one for a loss.

DEFENSIVE BACKS: B-PLUS. Richard Sherman gave up a 65-yard catch to Davante Adams, but also intercepted a deep pass intended for Adams to seal the win. Sherman isn’t the player he used to be, but it’s still a bad idea to test him. Ditto for K’Waun Williams, who stripped the ball from Rodgers. Emmanuel Moseley started in place of Ahkello Witherspoon, and held his own. Strong safety Jaquiski Tartt reinjured his ribs and left the game.

SPECIAL TEAMS: A. Richie James Jr. had a 26-yard punt return, and Robbie Gould made all three of his field-goal attempts, including a 54-yarder, his longest since 2015. Clutch.

COACHES: A. Robert Saleh didn’t shut down Adams, but Saleh didn’t need to because the Packers never were in the game. And they weren’t in the game because their defense couldn’t stop the run. Credit Kyle Shanahan for running the ball over and over and over again. Some play callers get cute and throw unnecessarily with a big lead. Even Shanahan did that in the Super Bowl three years ago when the Atlanta Falcons blew a 25-point second-half lead and lost to the New England Patriots. Shanahan didn’t make that mistake this time with a 27-point second half lead. He simply ran the Packers off the field. Shanahan has evolved, and now he’s in the discussion with Bill Walsh, who won the Super Bowl in his third season as the 49ers’ head coach. Shanahan is just one win away. What a coach.

This article has 48 Comments