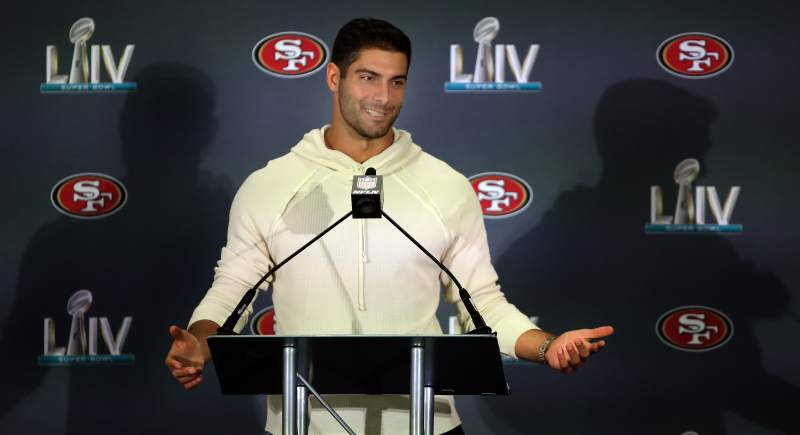 MIAMI — This is a love story.

At first it was just an arranged marriage. A shocking one. Jimmy Garoppolo thought he was the heir apparent to Tom Brady on the New England Patriots, thought he’d replace Brady at some point soon and become the face of the best organization in American sports. Then one day the Patriots traded Garoppolo to the winless 49ers, just like that. Goodbye, Jimmy. Good luck in Santa Clara. We’re divorcing you.

What a freaking comedown, right?

“Yeah, kind of, I guess,” Garoppolo said as he blushed and gave a diplomatic smile. “At first I felt just about every emotion you could feel. I was excited, confused, sad.”

Patriots head coach Bill Belichick called Garoppolo to tell him the news. “Coach was always very honest with me,” said Garoppolo, who still to this day refers to Belichick as “Coach,” while the 49ers’ Kyle Shanahan is just “Kyle.”

Garoppolo continued: “That’s the main thing I really appreciated about Coach — when he called, there was no beating around the bush. It was right to the point. He said he appreciated everything, and I said the same to him. The guy taught me so much about the pro game and the ins and outs of it. I appreciate everything he did for me, all those coaches in New England. My time there was good.”

Even now, Garoppolo sounds a tiny bit wistful when he speaks about his previous team.

Click here to read the rest of my story.

This article has 52 Comments

Will the 49ers win this Super Bowl this season?