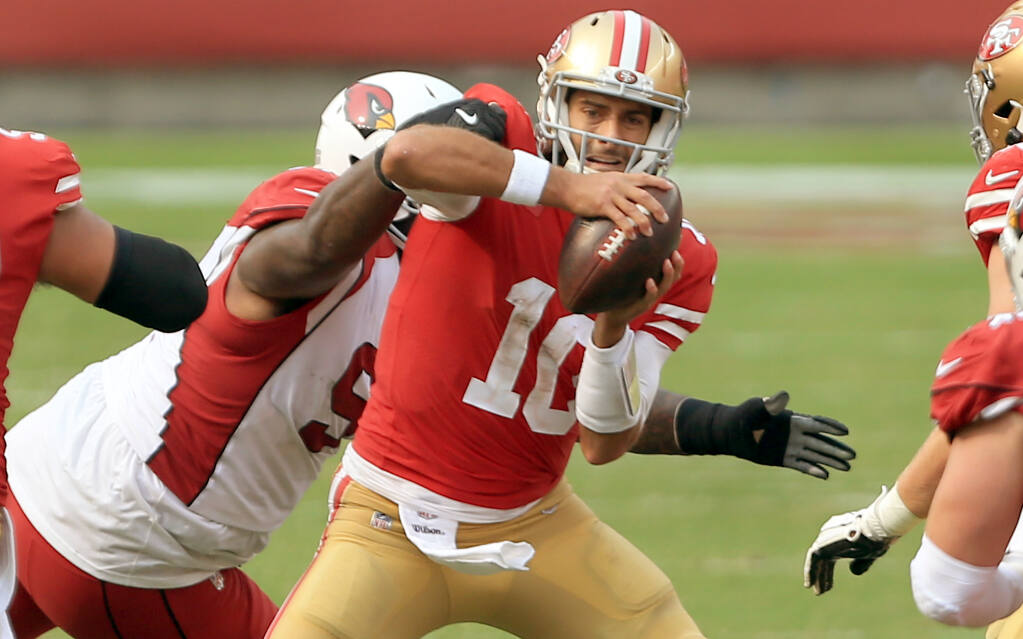 It was a long day for Jimmy Garoppolo against the Cardinals. But he wasn’t the only one. (Kent Porter/Press Democrat)

Unprepared, sloppy and flat, the 49ers hit the trifecta in Sunday’s 24-20 loss to the Cardinals. It isn’t often that you can blame all three football components for a loss,  offense, defense and special teams, but they all contributed.

I’m sure everyone is eager to get started with some Jimmy Garoppolo-bashing, and we’ll get to him, but first let’s highlight a couple of moments that said a lot about the outcome.

First, the blocked punt in the first quarter. That should virtually never happen to a competent, professional football team. Teams go a full year without getting a punt blocked.

The protection was lackadaisical at best. You’ve seen the replay, so no need to go over specifics. The 49ers missed their pickups, leaving slender defensive back Dontae Johnson to be steamrolled by two rushers up the middle.

But it was also important when it happened. The 49ers were up 10-0. Garoppolo was 5-7 for 111 yards and a TD. The running game was rolling. It all looked good.

The blocked punt turned everything upside down. The Cardinals recovered the ball deep in 49ers territory and scored immediately, making it 10-7. It was literally a whole new ball game.

Second, the 14-play, 94-yard Arizona drive at the end of the third quarter and start of the fourth. The 49ers defense not only could not get Arizona off the field, but they also gifted the Cardinals with free first downs.

Taking over at his own six, Kyler Murray had trouble getting it out of there. Facing third and ten, he was forced to throw the ball away so wildly that the 49ers tried to make a case for intentional grounding. But wait, K’Waun Williams was called for holding. First down.

Later, Murray faced second and 21. He ran for a modest gain. But Kerry Hyder was called for a late hit on Murray on the ground. First down.

And then, looking at third and 11, Murray overthrew his receiver. Players started to walk off the field. But wait. Emmanuel Mosley was called for holding. First down.

Soon thereafter Murray took off on a swerving, darting run for a touchdown to make it 17-13 Arizona.

And finally, your Super Bowl nightmare revisited. It is easy to forget that the 49ers came back and took the lead again in the fourth quarter. Garoppolo took them the length of the field, helped by a nice long throw to Kyle Juszczyk and a very fortunate pass interference call. Garoppolo hit Jerick McKinnon with the touchdown pass and let’s all pretend we didn’t think it might be offensive pass interference on Kittle.

But having done that, and taken a 20-17 lead, the Niners gave it back. On third and six, the 49ers let DeAndre Hopkins take a stroll through an empty space in pass coverage. A blown coverage at a critical point at the end of the game? Where in the name of Patrick Mahomes have we seen that before? And Hopkins, who was a monster Sunday (14 catches, 151 yards) is the last guy you want to leave uncovered.

Hopkins took the ball to the goal line and the Cardinals made it 24-20.

At that point, it became hey-Jimmy-can-you-bail-us-out-here? Could he put together one more last minute, game-winning drive? He couldn’t.

Garoppolo was throwing high all game. Kittle was left exposed reaching for a high ball and took a nasty shot to the knee. Others had the same experience. Not confidence-inducing.

Garopollo’s numbers weren’t bad, 19-33 for 259 yards, but the real story is lack of success on third down. Kittle mentioned it afterward.

It’s true. The Cardinals ran 17 more offensive plays and had 11 more first downs. They were able to keep the ball and tire the 49ers’ defense. Meanwhile, the 49ers couldn’t pick up first downs and couldn’t control the ball to give the defense a break.

A lot of that is on Garoppolo. At times, he definitely looked like someone who hasn’t played in a football game since February. His protection seemed pretty good. There were times when it looked like he had more time than he thought.

Still, he moved the team, threw for two touchdowns, including a 76-yard pitch and catch to Raheem Mostert, and passed for ten first downs.

But it has to happen in the red zone. Early in the game, the offense was looking at first and goal from the ten. A Kittle false start moved them back. Garoppolo was sacked while running in circles. Jet McKinnon gave everyone hope with a slick run to the one-yard-line.

And then, on fourth and one, Mostert was stopped short on a dive into the line. Those are some points the Niners could have used on the scoreboard later.

So what we’re saying here is, if you want to troll Jimmy G, go ahead. He knew the deal when he took the job. And he’s getting millions to do it.

Several times each year the game comes down to the end and the team looks to their franchise quarterback to bail them out. Sometimes it works. Not always. And when it doesn’t there’s lots of heat.

I’m just saying in this one you ought to give some thought to how the 49ers got to that point, trailing in the fourth quarter, giving up yardage and critical penalties.

This did not look like a team that was ready to start the season. That better change.

This article has 425 Comments